Mobile social networking is on the rise: As of August 2011, the number of people who accessed Facebook, LinkedIn, and Twitter via mobile devices grew 50%, 69%, and 75%, respectively, over the same period a year earlier, according to a report by the comScore MobiLens service.

Facebook was home to the largest mobile audience among the three social networking sites, attracting 57.3 million mobile users in August, followed by Twitter with 13.4 million users and LinkedIn with 5.5 million users.

Some 72.2 million Americans accessed social networking sites or blogs via mobile device in August, up 37% from one year earlier. Moreover, 58% of the mobile social media audience (nearly 40 million US mobile users), access such sites almost every day.

Among mobile social networkers, eight in ten (80.3%) read posts from people they know personally, while two-thirds (69.5%) post status updates via mobile device, and more than one-half (52.9%) read posts from brands or organizations. 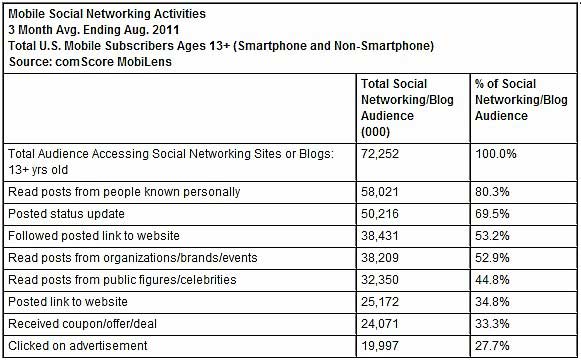