People who read who B2B, consumer, and association magazine apps cite portability, speed, and 24/7 access to content as the top 3 motivators for magazine app readership, according to a new survey from Texterity.

Once a magazine app is downloaded, mobile readers typically visit their app five times each month and nearly one-half (47%) spend 20 minutes or more in their magazine app; 26% spend 30+ minutes per issue.

Cross-platform engagement is prevalent as well: 82% of app users engage with the publishers brand in other ways outside of the app; among them most engage with those brands via print magazines (28%) and websites (27%): 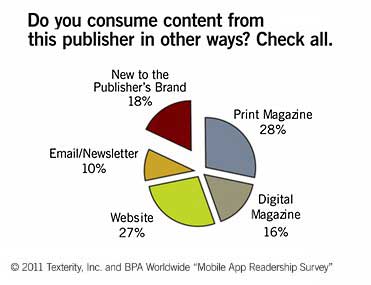 However, nearly one in five app users are new readers (18%) consuming content only from within the app, and representing an untapped audience for publishers.

A greater percentage of B2B app users are new to publisher content (24%), and such audiences are more likely to rely exclusively on digital content:

Nearly two-thirds of readers (66%) take action on advertising; among them 40% have made a purchase as a result of in-app advertising (online, in person, or by mail), 16% have visited a website at a later time, and 15% have purchased in-app via a link.

Mobile app users tend to be younger men: More than six in ten are younger than age 35, and 84% are men.

B2B app users are more likely to be men (89%) whereas association app users have the highest percentage of women (30%).

About the data: Findings are from a survey of 5,136 app magazines readers drawn from 25 publishers (11 consumer, 10 B2B, and 4 association), conducted May 1 to July 31, 2011. All surveys were conducted via smartphone or tablet, while readers were using the apps.