Small Businesses to Ramp Up Mobile, Social Marketing in 2012

In addition, one in five surveyed SMB decision-makers (small- and mid-sized businesses; defined in the study as organizations with fewer than 100 employees) plan to develop a mobile app in 2012: 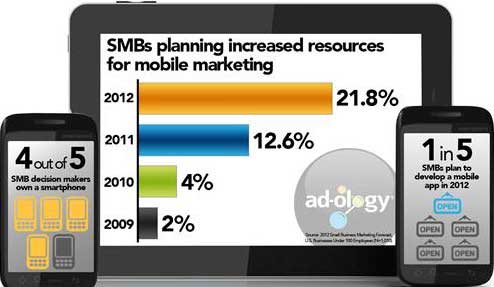 Small businesses are using a variety of social media channels, but Facebook is the most widely used, and appears to be the most effective: 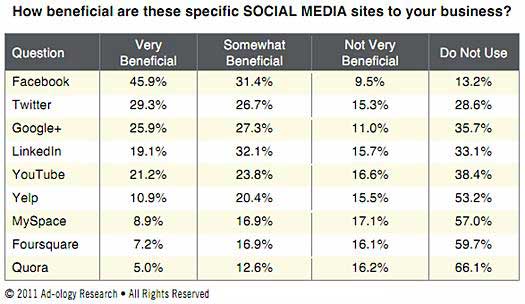 Though more than six in ten (61.6%) small businesses use YouTube, only 45.0% rate the video-sharing site as very or somewhat beneficial.

Small businesses have been slow to adopt Foursquare (only 40.3% have done so) and only 24.1% report the geo-location platform as very or somewhat effective.

For the first time, "improving the customer experience" was ranked as the top benefit of social media marketing efforts, according to the study.

Among other key findings among surveyed small businesses:

About the data: Ad-ology Research surveyed an online panel of 1,010 US small-business owners, October 25-31, 2011. The full 51-page Small Business Marketing Forecast report is available for purchase through the Ad-ology Research Store.