Consumers who own Apple iPhones and Google Android devices constitute the majority of the smartphone and mobile app user segments in the US, according to new data from Nielsen.

Among US smartphone users who have downloaded an app in the previous 30 days, 83% use an iPhone or Android phone.

The two vendors dominate the smartphone market overall: Among US smartphone users, more than seven in ten (71%) own an Android device (42.8%) or an iPhone (28.3%), whereas fewer than one in five own a RIM Blackberry (17.8%). 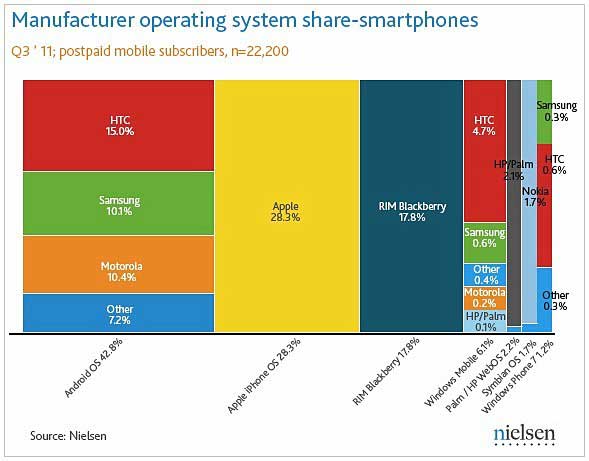 Though Android is the dominant smartphone platform in the US, both Google and Apple continue to spar over dominance in the apps market. 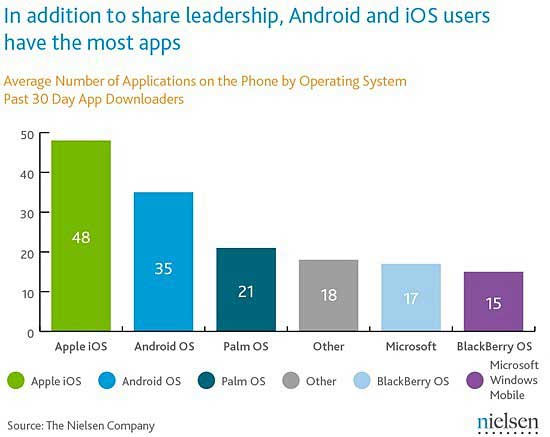 By comparison, app downloaders with Blackberry RIM smartphones have 15 apps on average on their devices.

But Android's widening lead in the smartphone market has driven, at least in part, its new dominance in the apps marketplace, according to ABI Research.

As of the second quarter of 2011, Android captured a leading 44% share all mobile app downloads, surpassing Apple's iOS, which grabbed 31%.

But Android's open-source strategy is also driving app downloads: "Being a free platform has expanded the Android device install base, which in turn has driven growth in the number of third party multiplatform and mobile operator app stores," said Lim Shiyang, ABI research associate. "These conditions alone explain why Android is the new leader in the mobile application market."

The bigger story behind the numbers, IDC noted, is an impending shift away from the current reliance on mobile app download purchases as the primary focus of app monetization.

Instead, developers are expected to focus increasingly on in-app purchasing and advertising to fund business models, a shift the firm found most evident in the free-app category.