Visits to the invitation-only social networking site Pinterest skyrocketed in the second half of 2011, reaching 11.0 million as of December 17, up nearly 40 times the level recorded six months earlier, according to data from Experian Hitwise. 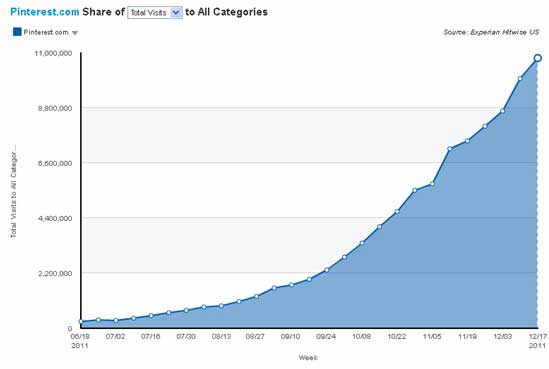 As the name suggests, Pinterest is an online pin board that allows you to "organize and share all the beautiful things you find on the Web," according to the company. Such things include images of food, home décor, clothing, and furniture, which users "pin" onto their pages.

The site was recently added to the Top 10 in Hitwise's Social Networking & Forums category. 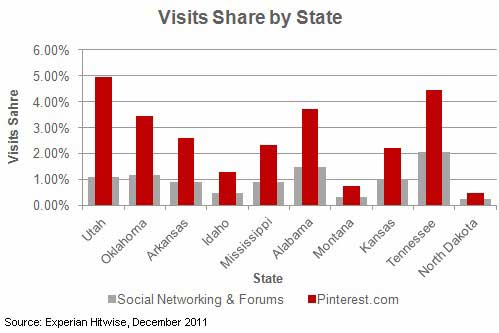 Moreover, nine of the top ten over-indexed states for Pinterest visitors also over-index for the Hobbies and Crafts category (versus the online population) which is understandable given the abundance of crafts content on the website.

Pinterest is gaining popularity in the media and among some brands. The site was recently named to Time Magazine's Top 50 websites of 2011, alongside Google+, Klout, Quora, and Storify, in the social media category.

Although personalities such as Kim Kardashian and Lady Gaga don't appear to have a presence on Pinterest (there is currently a waiting list) Paula Deen does have one, with more than 25,000 followers, 20 bulletin boards (e.g., Game-day Party Pleasers, Paula's Picks, and Cupcake Cravings) and more than 440 "pins."

Martha Stewart has more than 11,000 followers on Pinterest, while the department store Nordstom has roughly 6,000 followers.