Web Traffic via Mobile Up 102%

Some 12.6% of total website traffic was generated via mobile device in the fourth quarter of 2011, up 102% from the 6.3% recorded a year earlier, according to the Walker Sands Quarterly Web Traffic Report.

Google's Android operating system was the top smartphone OS during the period, accounting for nearly one-half of all mobile traffic to websites.

Below, other findings from The Walker Sands Quarterly Web Traffic Report, based on the analysis of Web data across a wide range of B2B and B2C clients in multiple industries.

The following chart highlights the steady growth in in mobile Web traffic over the past year: 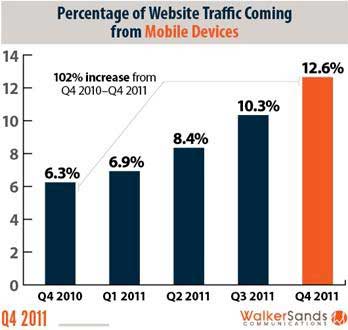 The above data are based on averages, but information from individual websites (among clients of Walker Sands) is interesting to note: 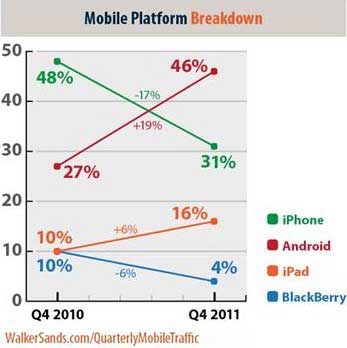 The iPad has changed the mobile playing field considerably: 16% of mobile traffic arrived via iPad during the quarter, up 6PPs from 10% a year earlier.

Only 4% of website traffic arrive to sites via BlackBerry in 4Q11.

About the data: Findings from the Walker Sands Quarterly Web Traffic Report are based on the analysis of Web data across a wide range of B2B and B2C clients in multiple industries in the fourth quarter of 2011.