What B2B Marketers Can Learn From Breaking News

Search engines such as Bing and Google tend to change the way they render SERPs (search engine results pages) in reaction to breaking news, favoring placed results (e.g., news, videos, and images) above the fold rather than organic search results, according to a new study by Optify.

That finding has implications for B2B marketers who want to better position relevant digital content on SERPs during breaking-news periods, according to Optify.

The study compares how Bing and Google treated search queries related to three different breaking news stories in 2011: a worldwide news event (the tsunami that hit Japan on March 11), a business news event (the resignation of the late Steve Jobs on August 24), and a local news event (Amanda Knox returning to Seattle on October 4).

The researchers conducted searches on Bing and Google, and then analyzed the evolution and performance of those keywords.*

Overall, both search engines changed the format of the SERPs during breaking news, serving links to placed results (news, videos, and images) (No. 5 in the diagram) at the top of the SERP, effectively pushing down organic search results below the fold, as shown in the following diagram: 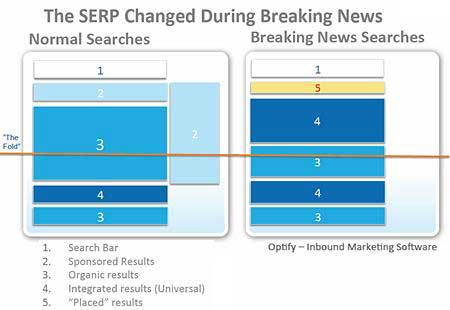 Placed results appear on the SERP as a result of Universal Search,** Optify notes.

Integrated, or blended results (No. 4) typically appeared above the fold during breaking news periods, in the form of images, maps, videos, music, news, social snippets, books, and blogs.

The remainder of the SERP featured organic search results related to the search terms.

*For each set of phrases, Optify captured screenshots of the keyword searches and compared how the two search engines treated the news. Those same searches were conducted via both search engines every 30-45 minutes to analyze the evolution of SERPs throughout the development of the event. At the end of the day, roughly 120 screenshots per event were collected and studied. Search queries were conducted without logging in to Google, and with a cleared search history to keep the SERP clean of personalized results.

**Universal Search (also known as "blended search") is the term given to the method Google started using in May 2007 to deliver search results that include content such as images, maps, videos, music, news, social snippets, etc.

About the study: All findings are from Optify's Breaking News Study, conducted in 2011.