Nearly six in ten CEOs (57%) expect social media to become a dominant method of engaging with customers over the next five years, more than triple the 16% who say social media is now a top way to engage customers, according to a study by IBM.

Among the CEOs surveyed, face-to-face interaction via sales and other organizational representatives (80%) is now the most dominant method of engaging with customers.

However, CEOs expect customer interaction via social media over the next five years to surpass websites (55%), channel partners (38%), and call centers (31%) to become the second most popular way to interact with customers. 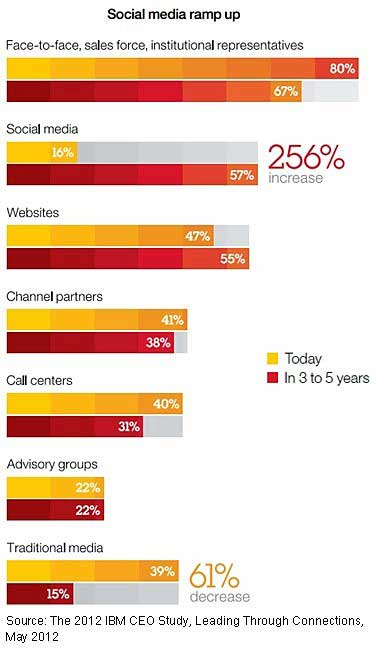 Such changes in customer interaction will likely come at the expense of more traditional channels, particularly traditional media, which is expected to decline some 61% over the next five years.

Below, additional findings from the 2012 IBM CEO Study.

Across all aspects of their organizations—from financials to competitors to operations—CEOs are most focused on gaining insights into their customers: 73% are making significant investments in their organizations' ability to draw meaningful customer insights from available data. 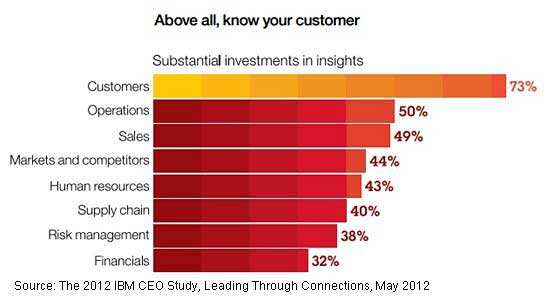 Among CEOs, 49% are making substantial investments in sales, while 44% are focused on competitive market intelligence.

CEOs recognize the need for improved customer-insights capabilities. The challenge for organizations is two-fold, IBM found: picking up on individual customer cues, and acting on those insights. Among the CEOs surveyed: 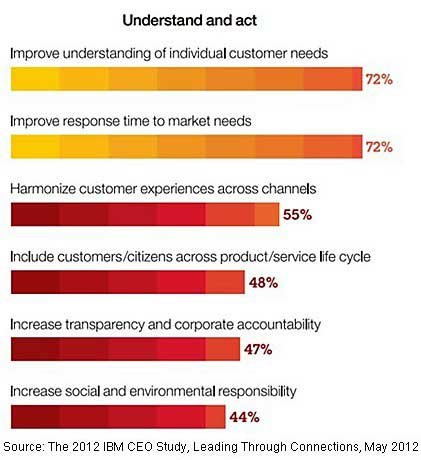 About the data: This study is based on face-to-face conversations with more than 1,709 chief executive officers and public sector leaders in 64 countries and 18 industries, conducted Sept. 2011 to Jan. 2012. Some 68% are located in mature markets and 32% are in growth markets. Roughly one-half (52%) lead global or multinational organizations; 48% are nationally focused.