Social Is Shifting Beyond Marketing

Large US companies are reframing their approach to social media, shifting from social marketing to social business, and that shift is affecting the ownership of social media responsibilities within the organization, according to a study by FedEx and Ketchum.

In a social business approach, social tools are used throughout the organization, expanding the impact, value, and reach of social media beyond the realm of consumer and brand management, according to the authors.

Below, additional findings from The 2012 FedEx/Ketchum Social Business Benchmarking Study, based on a survey of 55 large US companies (most participants had 2,000+ employees and annual revenues over $2.5 billion).

Though enhancing brand awareness and reputation is still a top objective for social media efforts among US corporations, fully one-half say they are effectively using social media to strengthen relationships with clients: 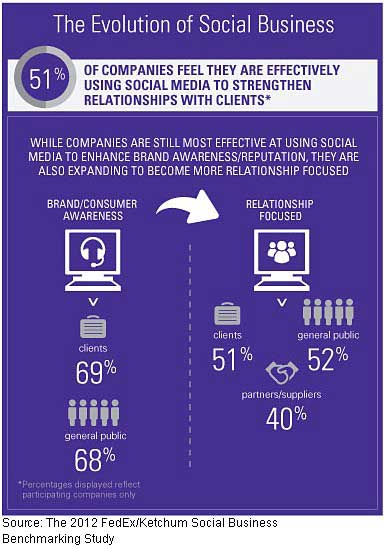 The relationships between large companies and their stakeholders (including clients, employees, public, partners, and investors) are also evolving.

Whereas the primary objectives with social media in 2010 were generating WOM advocacy and brand loyalty, the top goals in 2012 have shifted to fostering stakeholder collaboration and dialogue, and strengthening such relationships: 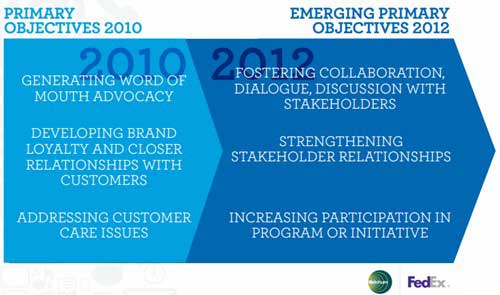 Not surprisingly, a trend among participating organizations is a shift from centralized (38%) management of social media to more matrix-structured teams and processes (48%) to support social business efforts: 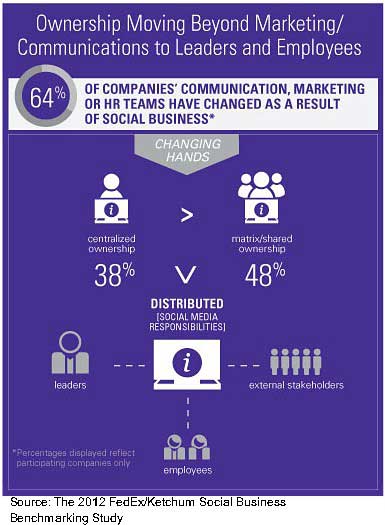 Social tools are increasingly being used inside the organization, affecting internal interactions, culture and structure: 85% of surveyed companies who are engaging employees via social media say the level of employee participation in their organization's social business efforts has increased in the previous 12 months. 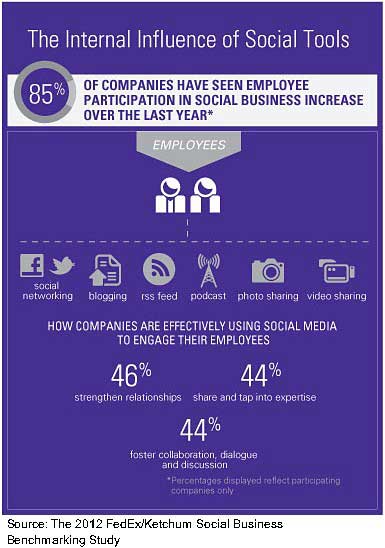 Moreover, many companies are using social media within the organization, to strengthen relationships with employees (46%), share and tap into expertise (44%), and foster collaboration, dialogue, and discussion (44%).