The use of blogging, Facebook, and Twitter among the nation's largest companies—those listed on the 2012 Fortune 500—has surged in 2012, according to a new study by the University of Massachusetts at Dartmouth:

Below, other findings from The Social Media Surge by the 2012 Fortune 500, issued by the Center for Marketing Research at the University of Massachusetts at Dartmouth.

Some 365 (73%) of the 2012 F500 have a corporate Twitter account with a tweet in the previous thirty days; among them, the 10 largest companies (Exxon, Wal-Mart, Chevron, ConocoPhillips, General Motors, General Electric, Berkshire Hathaway, Fannie Mae, Ford Motors and Hewlett-Packard) consistently post to their Twitter accounts.

The F500 companies with Twitter accounts come from a cross section of industries.

The food consumer products industry has the highest Twitter penetration with 93%, followed by the specialty retail and aerospace industries, each with 86%. 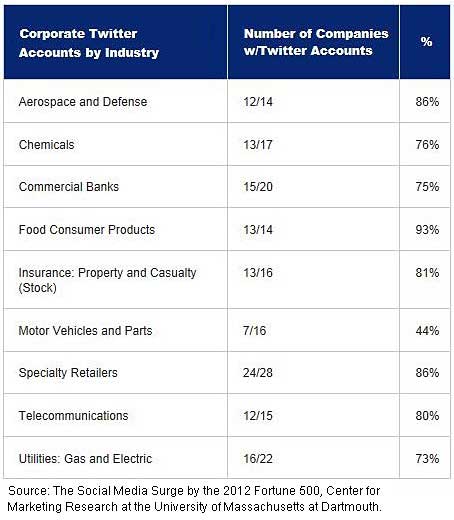 Some 332 (66%) of the 2012 F500 now have a corporate Facebook page; among them, 8 of the 10 largest companies (Wal-Mart, Chevron, ConocoPhillips, General Motors, General Electric, Fannie Mae, Ford Motors, and Hewlett-Packard) have a Facebook Page. Exxon and Berkshire Hathaway do not use Facebook.

Companies in the specialty retail industry have the highest Facebook penetration with 89%, followed by consumer food products and telecom, with 86% and 80%, respectively. 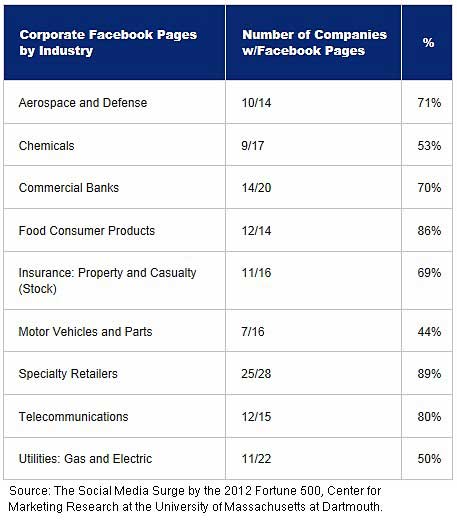 Those industries with no Facebook presence are tobacco and diversified outsourcing services, the study found.

For the second year in a row, Coca-Cola has the biggest Facebook fan base with 42.2 million fans. Walt Disney follows with 32.0 million. Walt Disney's and Intel's (10.4 million) fan bases have more than quadrupled year over year, while Yahoo's (9.6 million) and Google's (9.7 million) have more than doubled.

Some 139 F500 companies (28%) have a corporate blog. Two of the largest five corporations (Exxon and Wal-Mart) are included in that group, whereas the other three (Chevron, ConocoPhillips, and Berkshire Hathaway) do not have a corporate facing blog. 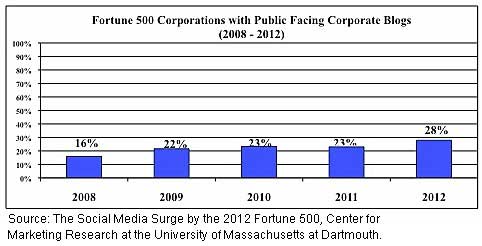 The 139 corporations with blogs come from 54 of the 71 industries represented in the F500.

Companies in the telecom industry are most likely to have a corporate blog: 40% do. Commercial banks follow with 30%, followed by utilities with 27% and specialty retail with 25%.

By contrast, only one F500 company in the Aerospace industry has a corporate blog.

A partial list is presented below showing those industries with the greatest presence in the F500. 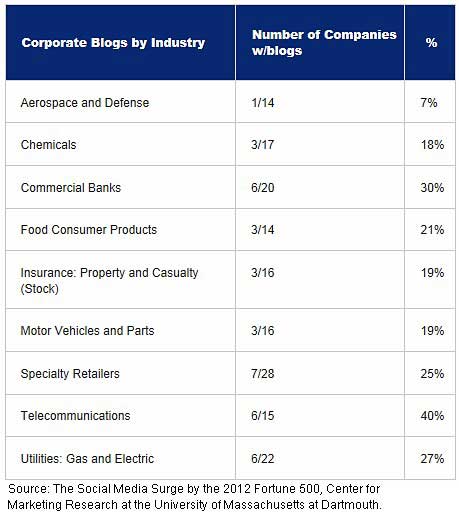 Corporations ranked in the top 200 of the F500 tend to blog far more than those in the bottom 200.

Since 2008, rank has influenced the adoption of blogging among the F500, whereas rank plays a smaller role in Facebook and Twitter adoption, the study found.

Over the past few years, the F500 companies have typically blogged at a lower rate than other business groups, specifically the Inc. 500. The Inc. 500 list is composed of the fastest-growing, private companies in the US, whereas the F500 is based on total revenue (not growth) and may include public and private companies.

About the data: Findings are from The Social Media Surge by the 2012 Fortune 500, by Nora Ganim Barnes, Ph.D., Center for Marketing Research at the University of Massachusetts at Dartmouth. Data was collected in July and August 2012.