From the conventions to the eve of the final presidential debate, Barack Obama and Mitt Romney have received more negative than positive coverage from the mainstream news media, but social media—particularly Twitter—has been even harsher, according to a report by Pew Research. 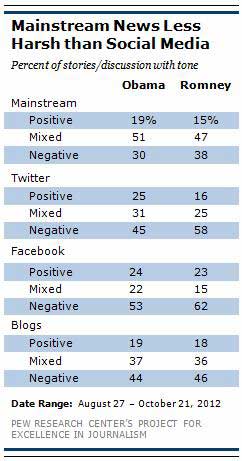 Below, additional findings from "Winning the Media Campaign 2012," by the Pew Research Center's Project for Excellence in Journalism.

Negative Twitter discussions about Romney outpaced positive ones some 42 percentage points over the eight-week study period. For Obama, negative messages outnumbered positive ones by 20 points.

In social media (e.g., Twitter, Facebook, and blogs), the narrative about both men has been "relentlessly negative" and relatively unmoved by campaign events that have shifted the mainstream narrative, Pew found.

More than one-half (55%) of registered voters who use the Internet have watched political videos online this election season, with many of those videos discovered via social networking sites, according to separate research by Pew.

Overall, 62% of Internet-using registered voters have had others recommend online videos for them to watch related to the election or to politics.

Among Internet-using registered voters, video recommendations have come from various sources, including the following: 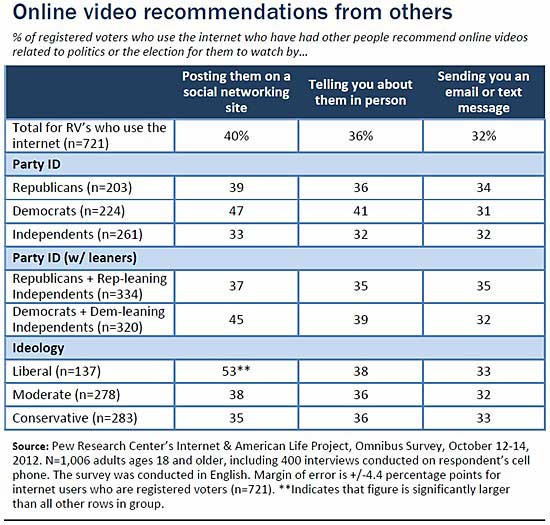 There are few partisan differences when it comes to watching political videos, or to having them recommended by other people.

Democratic and Republican voters are equally likely to have watched political videos online this election season and to have received such recommendations from others, Pew found.

However, registered voters who identify as liberal are more likely than moderate or conservative voters to have had political videos recommended to them via social networking sites. 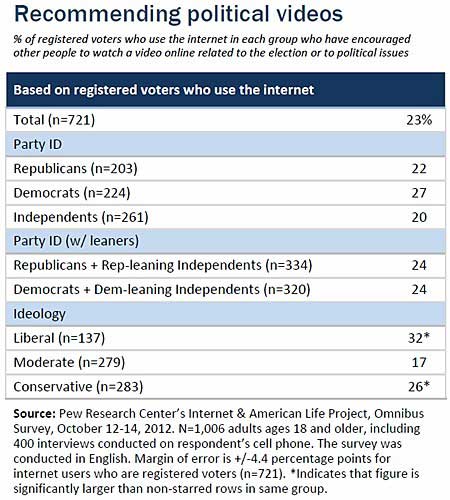 Online Americans who are registered to vote have watched various types of campaign-related videos, including the following:

About the research: For "Winning the Media Campaign 2012," Pew studied 49 news sources. To capture social media discussions, researchers combined a mix of traditional human coding with technology from the firm Crimson Hexagon. Researchers trained the computer "monitors" to replicate their human coding according to PEJ rules. For Twitter, the sample includes the full "fire hose" of public tweets. For Facebook, the study includes a large sampling of public posts about the campaign. The study included a sample of several million blogs as well. Findings are based on aggregated data collected from Aug. 27 to Oct. 21, 2012. The study was was authored by Director Tom Rosenstiel and Associate Director Mark Jurkowitz, along with Senior Researcher Paul Hitlin and Researcher Nancy Vogt.

Findings from "Online Political Videos and Campaign 2012" are based on a nationally representative phone survey of 1,006 adults (ages 18+), Oct. 12-14, 2012. The sample comprised 844 Internet users, 721 of whom are registered voters. The report was authored by Aaron Smith, research associate and Maeve Duggan, research assistant, both of the Pew Internet Project.