LinkedIn an Influential Force in IT Purchasing Process

Social networks overall have a growing and pervasive influence on the information technology (IT) purchasing process, despite the multiplicity of digital channels available to IT decision makers (ITDMs), according to studies from Forrester Consulting and Research Now, both commissioned by LinkedIn.

Moreover, LinkedIn has become an influential resource across the entire IT decision-making process, the research found.

To better understand how ITDMs are making purchasing decisions in an environment of information overload, LinkedIn commissioned a Forrester Consulting study titled "IT Purchasing Goes Social" and a ResearchNow study titled "IT Decision Makers Turn to LinkedIn." Both studies polled ITDMs across a diverse range of industries in North America.

Below, selected findings from those studies, as issued by LinkedIn. 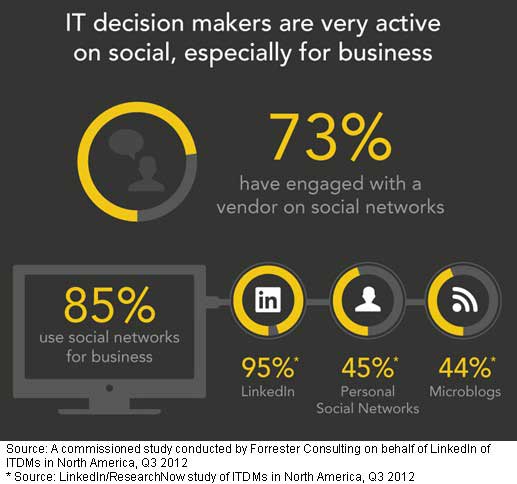 However, LinkedIn is the preferred choice for ITDMs: 95% have used the professional networking site for business in the previous year, compared with 45% who have used personal social networks (e.g., Facebook) and 44% who have used microblogs (e.g., Twitter).

Nearly 6 in 10 ITDMs (59%) say they are influenced by at least one social network when considering purchasing decisions.

Among ITDMs, social networks have varying degrees of influence during each of the five phases of decision making—awareness, scope, planning, selection, and implementation: 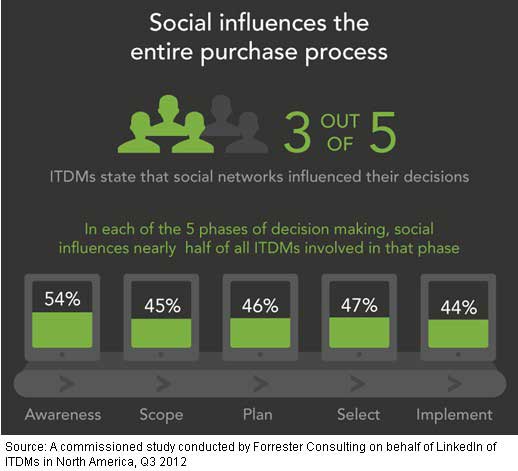 ITDMs turn to their social networks to streamline and validate the enormous volume of information they receive, and they consider four factors when doing so—trust, efficiency, relevance, and access—the study found.

Among ITDMs, factors such as trust and access are most important: 58% use social networks to learn from trusted peers, and 49% tap into social sites to reach a broader network of peers. 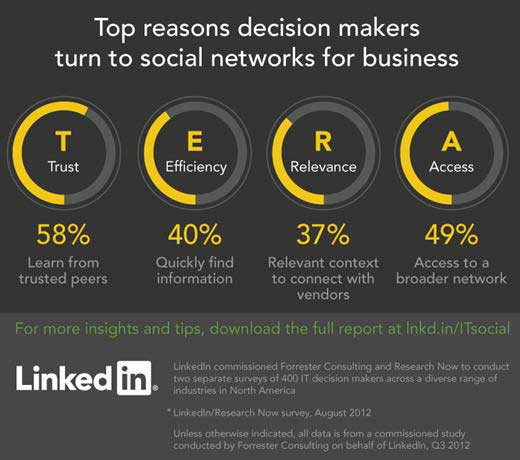 In addition, 40% used social networks to quickly find relevant information, and 37% do so to connect with vendors in a relevant context.

LinkedIn a Trusted Source of Information

With 95% penetration among ITDMs, LinkedIn is a critical platform for tech-related content. Some 56% of ITDMs say they follow a vendor via LinkedIn or belong to a vendor-sponsored LinkedIn group.

Moreover, among ITDMs, LinkedIn is a trusted source for validating information and connecting with vendors:

LinkedIn also offers ITDMs efficient and relevant information, as well as the ability to access a broader network of peers:

Note: Additional findings will be released at LinkedIn's Techconnect12 event on November 29, 2012, in Menlo Park, California.

About the data: The ResearchNow study of ITDMs polled 400 IT decision makers in North America in the third quarter of 2012. The Forrester Consulting study was also conducted among 400 IT decision makers in the third quarter of 2012. A plurality of respondents in both studies were from high-tech companies (17%), followed by manufacturing (15%) and finance (14%).