Buoyed by emerging "native" ad formats, US social media advertising* revenues are forecast to reach $9.2 billion in 2016, up from an estimated $4.6 billion in 2012, a compound annual growth rate (CAGR) of 19.2% over the five-year forecast period, according to BIA/Kelsey's US Local Media Forecast. 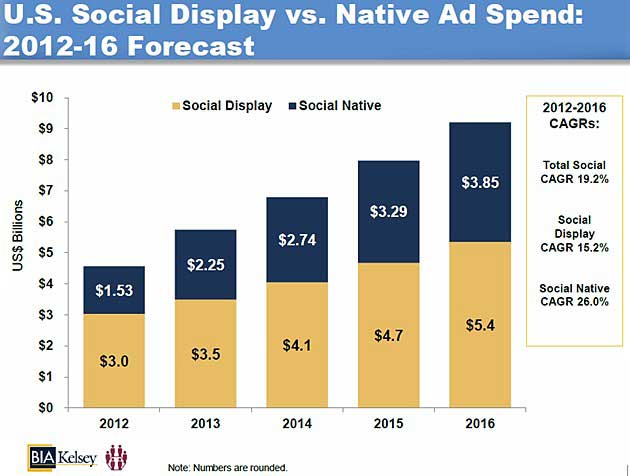 "Native" social ads are defined in the report as social advertising as branded content integrated within a social network experience (e.g., the newsfeed or content stream).

Below, other projections issued by BIA/Kelsey.

Mobile is also a growth area for social media. 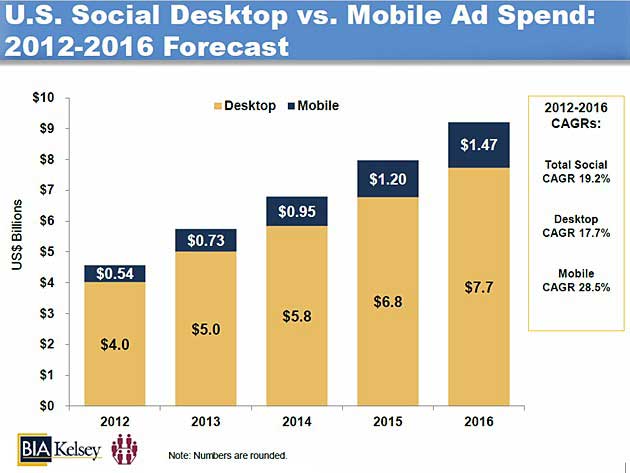 A variety of forces are expected to influence that growth, including rapid social-mobile consumer adoption growth, active experimentation by vendors, and deep integration of "native" ad units via the platform, according to BIA/Kelsey.

"The continued development of native ads, such as Facebook's Sponsored Stories and Twitter's Promoted Tweets, and the acceleration of mobile monetization will be the primary drivers of social advertising growth through 2016."

**The local media advertising marketplace is defined as those media that provide local audiences to all types of advertisers.

About the data: The US Local Media Forecast is based on proprietary and secondary information as available by segment, as well as additional research from BIA/Kelsey. The forecast is issued annually each spring and updated in the fall.