Mobile Advertising: Which Industries Are Taking the Lead?

In 2012, the government services industry (i.e., political advertisers during the election) recorded the biggest year-over-year (YOY) growth in mobile advertising spend on the Millennial Media platform, up some 860%, according to the 2012 Scorecard for Mobile Advertising Reach and Targeting (SMART) report.

The employment sector ranked second in mobile ad spend growth (up 523% YOY), followed by travel services (495%), and personal and home services (up 461%): 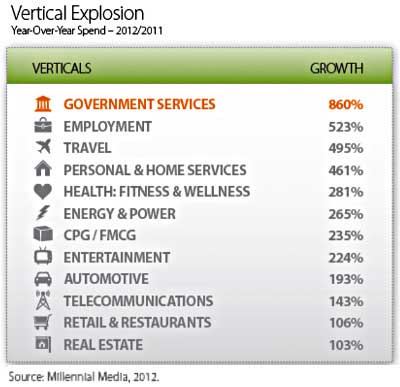 Retailers and Restaurants Are Top Spenders

Despite the impressive growth, the retail and restaurants industry still accounted for the largest share of spending on the Millennial Media platform in 2012 (16%). Those advertisers ran mobile campaigns year-round which drove consumers to both retail and online stores, according to the report. 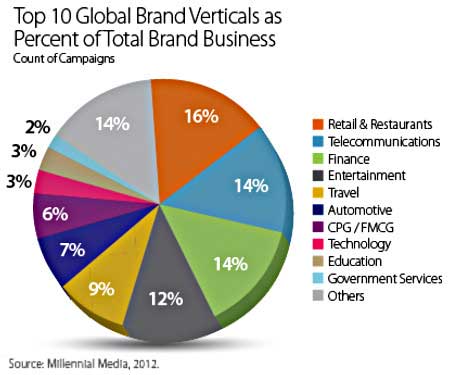 Across various post-click campaign actions (the action a marketing campaign is driving the customer to take once an ad is viewed) roughly 21% of campaigns featured a store locator/view map function, 18% linked to social media channels, and 16% were integrated with an m-commerce component.

For example, in the case of m-commerce integration, entertainment advertisers created campaigns that promoted new motion picture or DVD releases and then provided a link to purchase tickets or the DVD, Millennial Media said.

In addition to sustaining their in-market presence (39%), brand awareness (14%) and site traffic (14%) were key advertiser campaign goals in 2012: 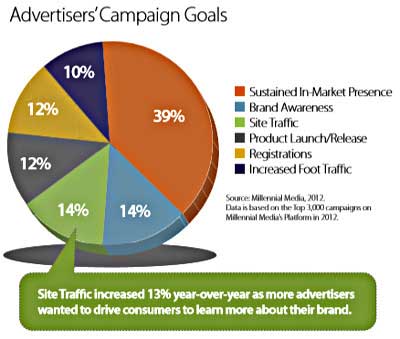 Travel advertisers ran mobile campaigns aimed at keeping their brand name top of mind with consumers to drive hotel stays and trip planning. Similarly, car manufacturers used the "learn more" or "site search" functions in their campaigns to drive consumers to their webpages where they could explore various vehicles and features offered, Millennial Media said.

About the data: Findings for the 2012 Year-in-Review SMART report are based on campaigns conducted on the Millennial Media platform in 2012.