Smartphones have become the central social, communication, and information tool for growing numbers of younger Americans, according to a study conducted by IDC for Facebook.

Among smartphone owners age 18-44, making phone calls accounts for only 16% of the total time spent with their devices, whereas the remaining 84% of time is spent texting and interacting with email and social networks.

Below, additional findings from the report titled "Always Connected: How Smartphones and Social Keep Us Engaged," sponsored by Facebook, which studied how 7,500 smartphones owners age 18-44 used their devices over the course of one week in March 2013.

Across 10 popular applications and smartphone activities, email (78%) is the most popular among smartphone users age 18-44, followed by browsing the Web (73%), and accessing Facebook (70%). 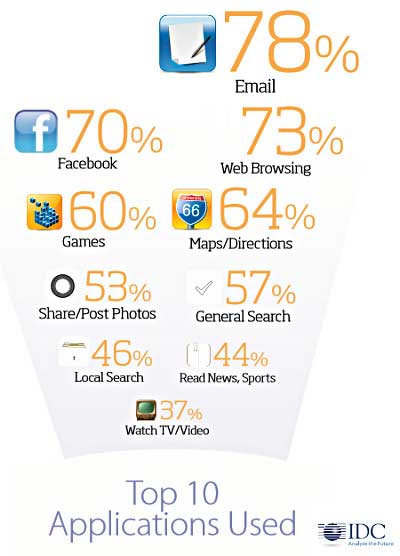 Smartphones are now a constant in people’s lives. Among smartphone owners age 18-44:

Smartphones (via social apps) play an important role for people when they're out socializing.

Among those 70%, some 82% read their news feed and 49% post comments or respond to others—the two most popular activities. 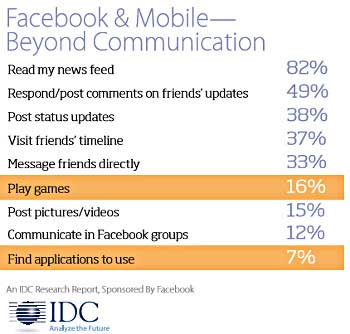 However, beyond communication, Facebook is driving engagement via games and application discovery: 16% of mobile Facebook users access the site to play games, and 7% do so to discover mobile apps.

On average, smartphone owners age 18-44 spend 132 minutes each day using their device. Of that total, Facebook accounts for 25%—roughly 33 minutes.

Of that 33 minutes spent connecting with Facebook via mobile, 16 minutes are spent browsing news feed, nearly 10 minutes messaging, and just over 6 posting status updates and photos. 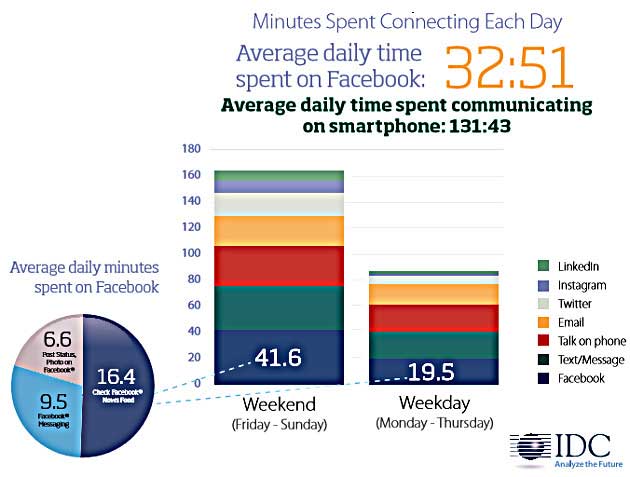 Notably, engagement over the weekend is twice as heavy, highlighting critical mobile devices and applications are to users’ most important social relationships.

How People Feel When They Connect

People often feel excited or curious when they post or check in to social media sites:

About the data: IDC conducted an online survey of 1,000+ iOS and Android smartphone owners age 18-44 in the US each day for 1 week (Friday-Thursday) in March 2013, for a total number of respondents of 7,446. During Tuesday through Thursday, users age 18-24 were underrepresented. As such, the data were weighted by age and operating system to ensure accurate representation of the installed base of smartphones.