Mobile Commerce Trends by Country in 2013

Worldwide, most mobile media users (65%) used their devices to purchase goods or services in 2013, according to a recent report by MEF.

The study, based on data from a survey of 10,000 consumers in 13 countries, found that Kenyans are most likely to have made a purchase with their mobile devices in 2013 (97% did so), followed by South Africans (94%).

Brazilians (71%), Mexicans (77%), and Indians (79%), were the least likely to have made a purchase using their mobile devices in 2013, though the majority still did so in each country. 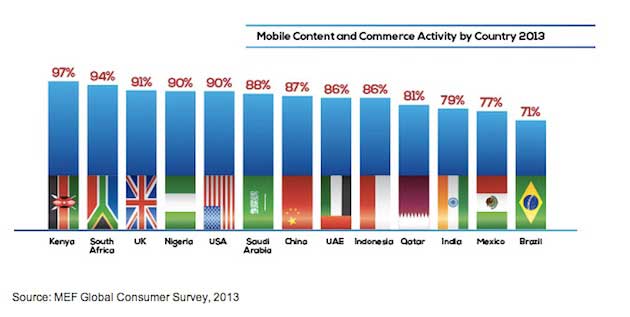 Below, additional key findings from the survey of consumers in Brazil, China, India, Indonesia, Kenya, Mexico, Nigeria, Qatar, Saudi Arabia, South Africa, the UAE, the UK, and the US.

About the research: The report was based on data from a survey of 10,000 consumers in 13 countries: Brazil, China, India, Indonesia, Kenya, Mexico, Nigeria, Qatar, Saudi Arabia, South Africa, the UAE, the UK, and the US.