From stats and scores to game footage, mobile devices played a huge role in sports content consumption in 2012, according to Nielsen's 2012 Year in Sports summary, including its annual list of the year's most marketable athletes.

Nearly 60% of smartphone and tablet owners accessed sports content via their device at least once a day from January to September 2012, Nielsen found.

In addition, some 12% of smartphone owners and 10% of tablet owners did so more than three times a day: 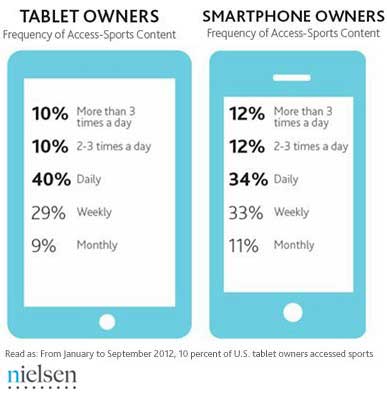 Though sports content comes in many shapes and forms, sports fans typically pay most attention to the latest scores and stats. 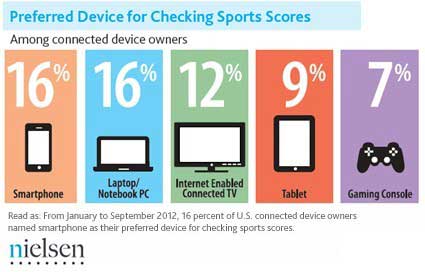 Sports fans were also active on social media during the year: 41% of all TV-related Tweets were about sports programming, though sports accounted for only 1.3% of all TV programming.

To determine the most marketable athletes, Nielsen partnered with E-Poll Market Research to create the "N-Score," a metric that measures the endorsement potential of athletes.

To calculate the scores, Nielsen polled roughly 1,100 Americans age 13+. The results are based on the public's awareness of the athletes and on a series of questions pertaining to their appeal and attributes.

Among moms surveyed, Michael Phelps is the most marketable athlete in the US, with an N-Score of 497, whereas among dads, that award goes to Peyton Manning with a score of 553. For dads, the second place winner, Danica Patrick, trails Manning by some 192 points.

About the data: All findings are from Nielsen Company, January to September, 2012. N-Scores were based on a poll of roughly 1,100 Americans age 13+, conducted by Nielsen and E-Poll Market Research.