Adults worldwide report using the mobile Web for 1.98 hours per day on average, according to a recent report from GlobalWebIndex.

The use of mobile devices to access the Internet is up sharply from 2012, when survey respondents said they used the mobile Web for 1.31 hours on average per day.

Not surprisingly, the usage of the mobile Web varies significantly by age: 94% of surveyed people age 16-24 said they are daily users, compared with just 51% of people age 55-64.

Members of the youngest group are also the heaviest users in terms of time: 45% of respondents age 16-24 say they typically spend more than two hours a day on the mobile Web.

The use of the mobile Web also varies significantly by country: Almost all online adults surveyed in China and Hong Kong say they are using the mobile Internet on a daily basis, whereas just 3 in 5 are doing so in France and Japan. 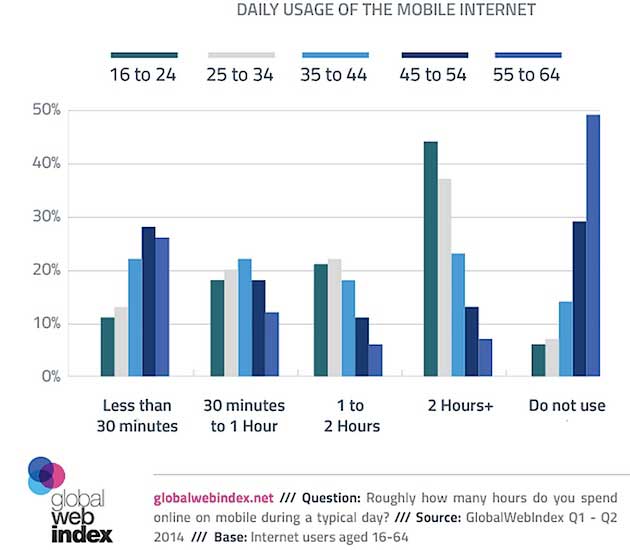 About the research: The report was based on 1Q14 and 2Q14 data from a global poll of Internet users age 16-64.