Sales of Chromebooks will reach 5.2 million units in 2014, a 79% increase from 2013 levels, according to a recent report from Gartner.

Demand for the low-cost computers, which run Google's Chrome OS, is mainly driven by the education sector in the United States, according to the report. The education sector accounted for nearly 85% of Chromebook sales in 2013, Gartner estimates.

Samsung and Acer, the first vendors to invest in Chromebooks, were the two leaders in the market last year.

Samsung led the Chromebook market globally in 2013, selling 1.7 million units (64.9% of all shipments). The manufacturer was especially dominant in the education market, producing the most popular devices in both primary and secondary schools.

Acer was the second most popular Chromebook manufacturer in 2013, with a 21.4% market share, followed by HP, which had a 6.8% share of shipments.

Lenovo, which did not start producing Chromebooks until 2013, accounted for 6.7% of shipments.

This year competition is intensifying in the market as more vendors launch Chromebooks, with eight already offering models in 2014. 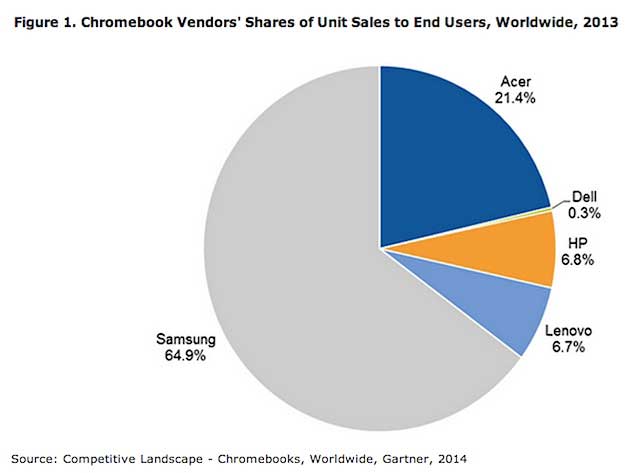