Media Viewing Grows Thanks to Digital Video, Even as TV Viewing Declines

Digital video consumption has fueled an overall increase in Americans' media viewing over the past year, according to a recent report from Nielsen.

Average time spent viewing digital video (on computers and mobile devices) by adults in the United States increased significantly among all age groups between 2Q13 and 2Q14, the analysis found.

The increase in digital viewing has led to more media consumption per day, especially among certain groups: Total media consumption among 18-34-year-olds increased 4% year over year, 2% among Hispanics, 8% among Blacks, and 10% among Asians.

Though overall media consumption was up, daily viewership of television fell slightly for all age groups between 2Q13 and 2Q14. Adults in the United States age 18-34 and 50-64 watched 2% less TV per day on average, and adults age 35-49 watched 1% less. 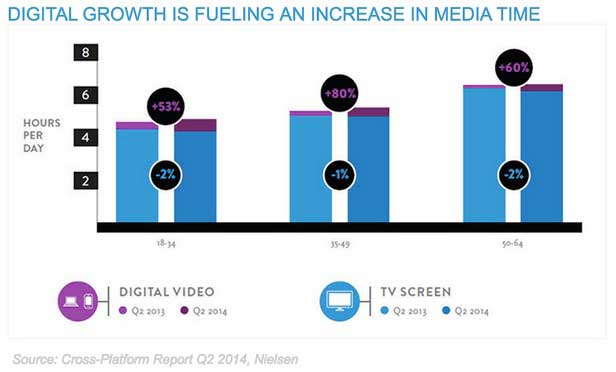