How Millennial Parents Use Mobile Phones to Shop in Stores

Some 85% of all Millennial parents say they use smartphones to help them shop while in stores, according to a recent report from Retale.

The report was based on data from a survey of 500 Millennial adult men and women age 18-34 who live in the United States.

Though mobile use is nearly equally popular for Millennial mom and dad in-store shoppers, how each group uses its devices varies significantly, the analysis found.

Moreover, moms cite searching for coupons/deals as the top task they use their mobile devices for (66% do so), whereas checking deals/coupons ranks as the the fifth most popular task among Millennial dad shoppers (49% do so). 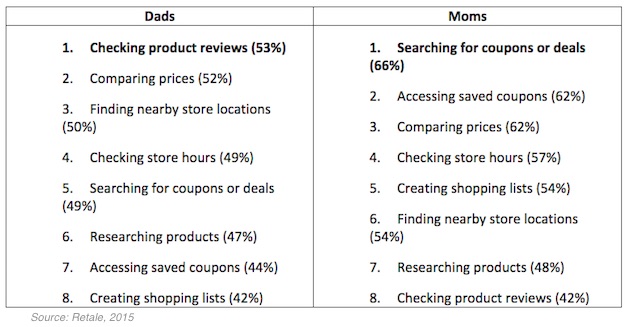 About the research: The report was based on data from a survey of 500 Millennial adult men and women age 18-34 who live in the United States.

Continue reading "How Millennial Parents Use Mobile Phones to Shop in Stores" ... Read the full article