The number of non-Hispanic adults in the United States who identify as lesbian, gay, bisexual, or transgender (LGBT) has risen 30% since 2007, according to a recent report from Experian Marketing Services.

The report was based on data from the Simmons National Consumer Study, a continuously fielded survey of approximately 25,000 adults in the United States.

Younger Americans are more likely to identify as LGBT than older Americans: Some 5.7% of Millennials are out, compared with 3.7% of Baby Boomers. 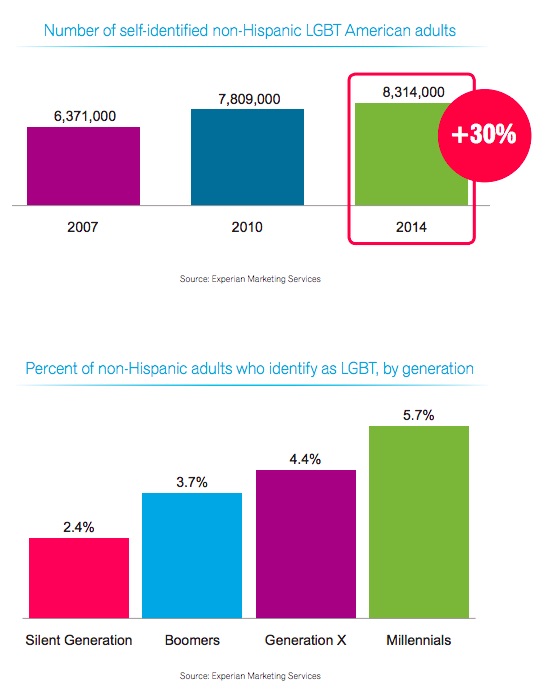 Some 18% of gay and lesbian adults are married, up 88% from 2007; however, this group still makes up less than 1% of all married couples.

LGBT adults are twice as likely as heterosexual adults to have gotten married in the last year, and 50% more likely to be planning to wed sometime during the next 12 months; 10% of all adults planning a wedding in the coming year are LGBT.

LGBT adults are more likely to live alone, with 34% of gay men and 25% of lesbians surveyed saying they do not live with any other adults, compared with 18% of all non-Hispanic adults who live alone.

Gay men and lesbians are also more likely to live with roommates.

The incomes of individual LGBT workers are 7% below those of working heterosexual adults, on average.

Partnered gay men have the highest household incomes of any group examined. 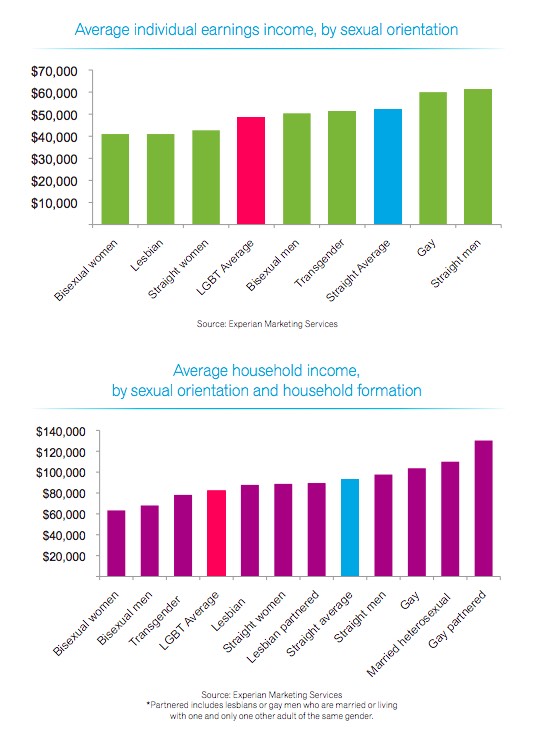 Some 34% of LGBT adults say that they “very often” use another device or consume media from another source while watching television, making them 14% more likely than heterosexuals to multitask.

Gay or bisexual men are much more likely than average to watch cable news networks, including MSNBC and CNN—but not Fox News—as well as science and science-fiction networks.

Networks that appeal to families or children are among those that over-index with lesbian or bisexual women. Networks that are targeted at women in general, such as Oxygen and the Lifetime Movie Network, also do well.

About the research: The report was based on data from the Simmons national consumer study, a continuously fielded survey of approximately 25,000 adults in the United States.