Who Are the Americans That Never Use the Internet?

Some 15% of adults in the United States do not use the Internet, according to a recent report from the Pew Research Center.

The report was based on data from three surveys of a nationally representative sample of adults living in the United States.

Over time, the offline population has been steadily shrinking, the analysis found. In the year 2000, 48% of Americans did not use the internet, and even as recently as 2010 nearly a quarter (24%) were not online.

For some groups the rise in Internet adoption has been especially pronounced: 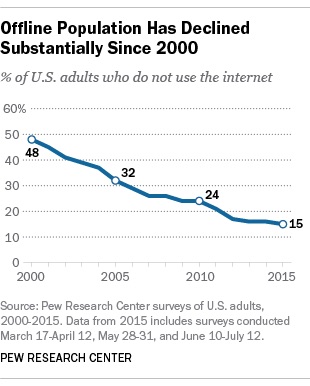 Despite a rise in their use of the Internet, seniors remain the group most likely to say they never go online. Some 39% of adults age 65 and older do not use the Internet, compared with only 3% of 18-29-year-olds.

Household income and education are also strongly linked to a person’s likelihood to be offline:

Rural Americans are about twice as likely as those who live in urban or suburban areas to never use the Internet.

Racial and ethnic differences are also evident: One-in-five blacks and 18% of Hispanics do not use the Internet, compared with 14% of whites and only 5% of English-speaking Asian-Americans—the racial or ethnic group least likely to be offline.

About the research: The report was based on data from three surveys of a nationally representative sample of adults living in the United States.