How Often (and Why) Consumers Delete Mobile Apps From Their Phones

Most smartphone users in the United States regularly go through their phones to look for and delete unused apps, according to a recent report from Yahoo Advertising.

The report was based on data from a survey of 2,590 consumers age 13-64 in the United States who own a smartphone.

Respondents go through their phones and delete apps 1-2 times per month, on average, the analysis found.

Some 60% of respondents say they do periodic clean outs, 36% delete old apps when they download new apps, and 36% delete apps to free up memory for software updates. 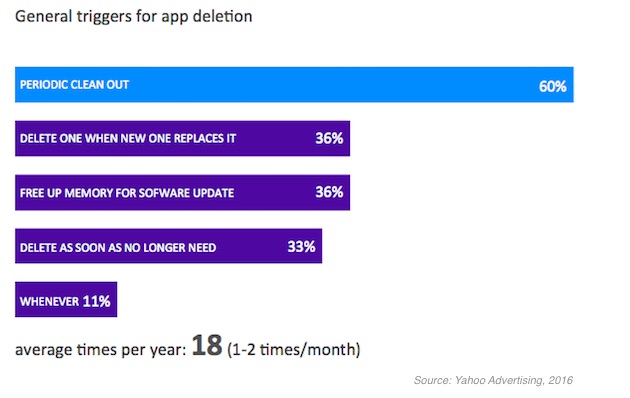 Nearly three-quarters (73%) of respondents say they have deleted apps because of storage concerns with their phone.

Nearly half (48%) of consumers surveyed say they usually delete an app within a month if they're not using it.

About the research: The report was based on data from a survey of 2,590 consumers age 13-64 in the United States who own a smartphone.