What percentage of emails sent by businesses are viewed by consumers? What share of messages end up in spam folders, on average?

To find out, Return Path examined the activity of more than 2.5 million consumer panelists and data from 3.5 billion commercial email messages received between January 1, 2015 and December 31, 2015.

The average read rate (i.e., the percentage of emails viewed rather than sent to spam or immediately deleted, archived, ignored, etc.) was 14% across all industries in 2015, the analysis found.

Read rate differs from open rate in that it is based on mailbox providers' marking messages as "read" due to subscriber activity in the inbox, rather than being based on the loading of an image pixel.

Average read rate varies significantly by industry, the analysis found. For example, only 12% of deals/rewards emails were read by consumers in 2015, whereas 47% of emails sent by utility companies were read. 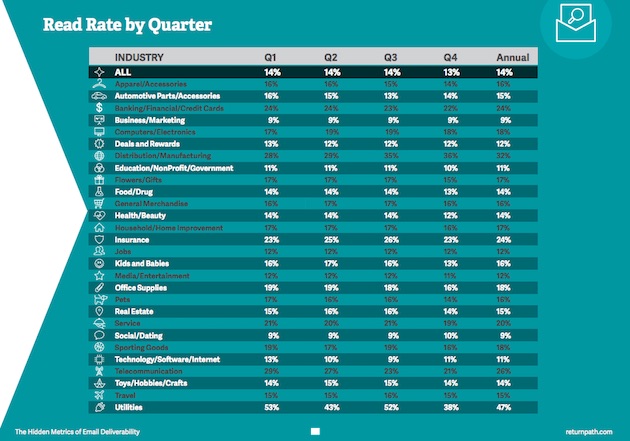 Some 12% of all emails examined by Return Path ended up in consumers' spam folders. This rate varies widely by industry as well; just 2% of emails sent by utility companies went to spam, whereas 29% of emails sent by automotive parts/accessory retailers did so. 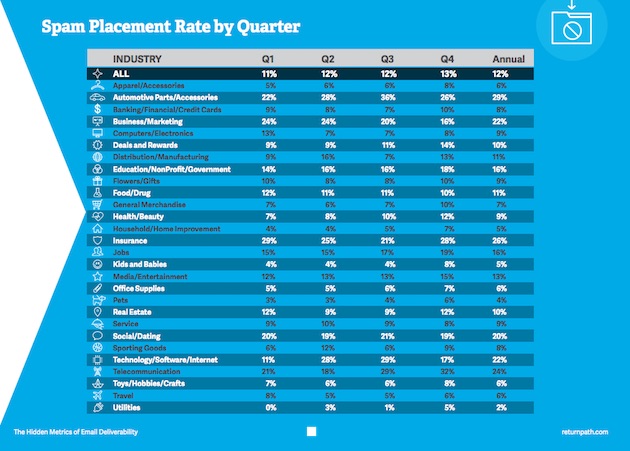 About the research: The report was based on data from more than 2.5 million consumer panelists and 3.5 billion commercial email messages received between January 1, 2015 and December 31, 2015.