The 10 Most Common Phrases in Viral Headlines

Which sets of words appear most often in the headlines of articles that go viral on social media?

To find out, BuzzSumo examined data from the headlines of 1 million random articles from top publishers posted on social networks.

The researchers extracted the most common trigrams (three-word phrases) in the top shared pieces on social media; only trigrams that were present in at least 150 of the article headlines were included in the data set. 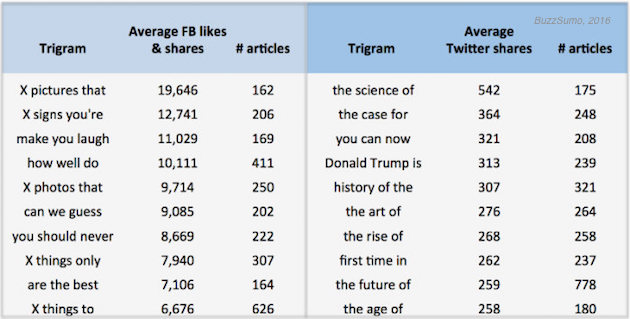 The researchers also looked at the performance of individual superlative words in the headlines of top publishers. For the most common words, Buzzsumo examined 10,000 articles that included each in the headline and determined average number of social shares across different networks.

"Amazing" is the superlative that appears in the most popular article headlines on both Facebook and Twitter; "successful" is the word that appears most on viral LinkedIn posts.

About the research: The report was based on data from the headlines of 1 million random articles from top publishers posted on social networks.