Want to boost the open rates of your holiday-themed emails? Then you should be more specific in your subject lines about which holidays you're referencing, according to recent research from Sailthru.

The report was based on an analysis of data from 89,932 email campaigns sent by Sailthru customers in the retail/e-commerce vertical during the 2015 holiday season.

Campaigns that include "Christmas" in their subject lines have open rates 26% higher than emails with subject lines that use the words "holiday” or "holidays" (without also mentioning Christmas).

Subject lines that mention "Chanukah" (or other spellings) are much less common, but they average 40% higher open rates than those that use "holiday" or "holidays."

Holiday-related email campaigns that include specific prices or percentages off in their subject lines perform below average (defined in the report as less than the open rate index score of 100). Messages that include "extra" percentage discounts perform especially poorly. 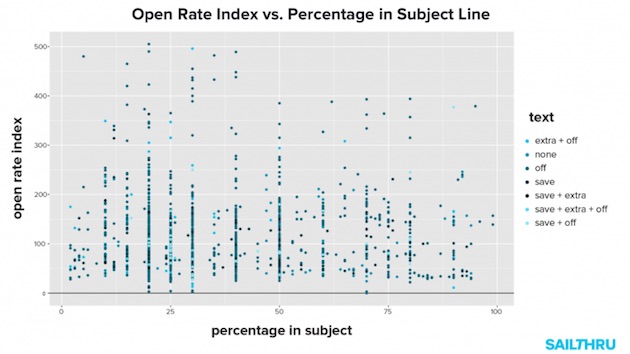 Messages with email subject lines that reference a broad "discount" have the highest open rates, on average, the analysis found.

Subject lines that include the words "bestselling," "deal," and "top" also perform significantly above average.

Campaigns with email subject lines that include "complimentary" or "excited" have the lowest open rates, on average. 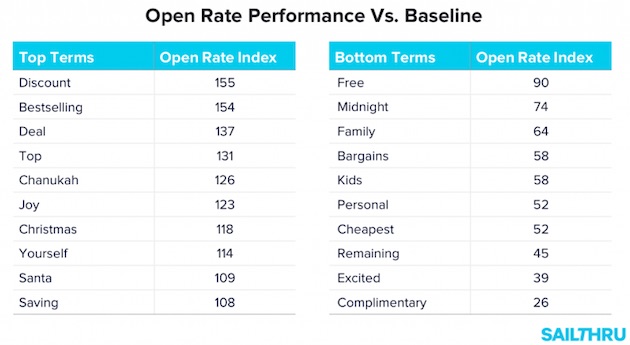 About the report: The report was based on an analysis of data from 89,932 email campaigns sent by Sailthru customers in the retail/e-commerce vertical during the 2015 holiday season.