We're loving the summer sunshine, but tweeting away anyway... because socnets just don't go on vacation. Find out what differentiates Instagram Video from Vine, why social is key to being found online, how Conan O'Brien made the leap from late-night host to social sensation, and how to promote your brand on YouTube. Skim for a social summer!

DOMA's been flipped! It's a happy week for marriage-equality folks everywhere, following news that the Supreme Court overturned a key provision of the Defense of Marriage Act. Many brands are celebrating publicly, proudly putting their views in the forefront, including Goldman Sachs, MasterCard, Smirnoff, and—maybe sweetest of all—Ben & Jerry's. A small reminder that in this brave new world, it's as much about who you are and where you stand as what you sell.

Why Vine won't shrivel because of Instagram Video. Conversation about Instagram's launch of 15-second videos is shifting. Instead of wondering whether it'll "beat" Vine, some feel there's room for both in the market, in the same way there's room for both Twitter and Facebook. Says Ovum analyst Jan Dawson, "Vine is like fast food, while Instagram video is more like eating in a nicer restaurant." We think it's too soon to tell. But to form your own opinion, check out Vine versus Instagram, a superfast way to see offerings from each site side-by-side... then vote for which is better. We'll say quality production is wanting on both. 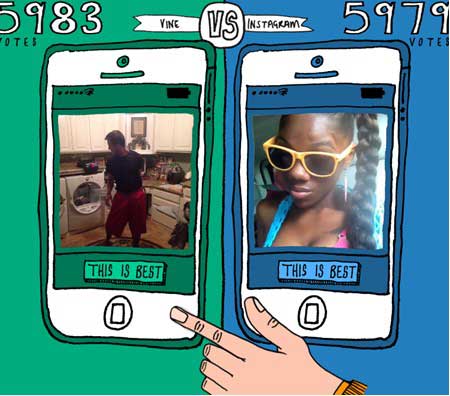 Speaking of insta-video, VP of Digital Strategy Tim Baker of the MWW Group explains how you can build a robust video strategy. Nothing you haven't heard before: However long your video is, ensure it tells a story. He also thinks that if you can't tell a story in six seconds, you're not "trying hard enough."

Social: stronger than search? Last year, half of American internet users between 18 and 23, and 43% of users between 24 and 32, used social networks as their primary online discovery resource, according to Forrester Research. Facebook and Twitter are the preferred means of discovery for nearly one-third of Americans, up from just 18% in 2010. And though 54% still rely on traditional search to find what they seek, the figure is declining. That's not to say you should scale down your SEO... but definitely consider scaling up on your social presence. It may be the way most of your customers find you.

It's a real cloud atlas. For an example of how big data can make a difference, all you need to do is look up. The CloudSpotter app enables users to take pictures of clouds and try identifying their type. NASA will be using this data to calibrate its CERES instrument to better monitor the effect of clouds on Earth's climate. Happy cloudspotting! 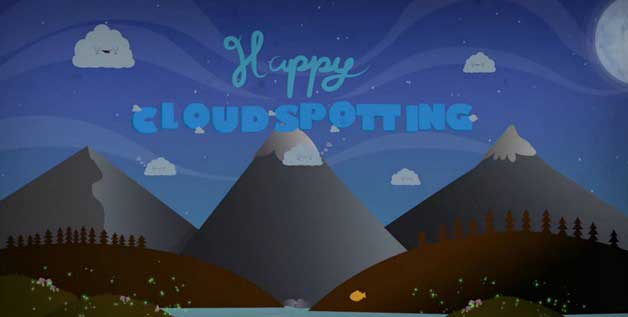 The YouTube force is strong with you. Alesia Krush outlines how to boost your brand on YouTube, detailing methods both paid and free. She also shows how paid methods, like smart use of AdWords, will improve free elements, like your natural video rankings on YouTube search.

Vanishing ink ain't cheap. Snapchat, the social network that's got parents trembling, just raised $60-$80M in a Series B round led by Institutional Venture Partners. The company is valued at $800 million. TechCrunch guesses it'll use the money to scale its presence on the Ephemeral-net, that new trend among youth for capturing shareable—and quickly disposable—moments.

Learn socnets from Coco. Conan O'Brien, whose talk at Cannes Lions was among the funniest and most memorable, explains how he made the switch from old-school talk show host to social media superstar. Coco calls Twitter and Facebook "fundamental," saying Facebook alone yielded "25 million views in the last month" for some of his clips. He's hoping to monetize that presence in a way that keeps advertisers on the backburner and ensures he can still be himself. For a sense of how hard Coco rocks on social, check out his tumblr, TeamCoco, jam-packed with GIFs, shareable quotes, and self-deprecating goodies. 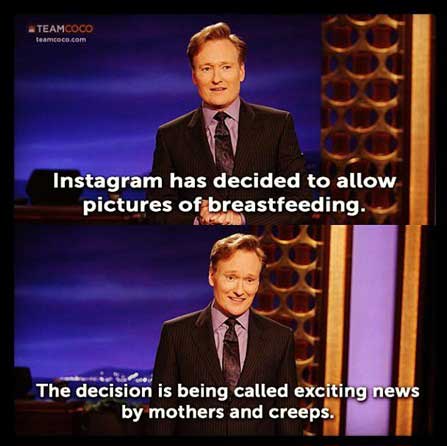 Socialize your events. It's conference season, and just because you're doing workshops doesn't mean you can't get social networkers following along, too. Paul Gillin provides 10 ways to socialize events: Create a hashtag, launch an event blog, and photo-tag attendees, among other tidbits.

Tweeting at the conference table. We'll wrap with something both humanly and professionally interesting: an infographic that details how social networks are used at work. You may find yourself pleasantly surprised: 46% of nearly 10,000 workers surveyed find their productivity has greatly increased because of social tools. But 34% feel management underestimates social's benefit at work, and 37% feel they'd be better at their jobs if management was more supportive of the use of social tools. Work in progress. (See the full image here.) 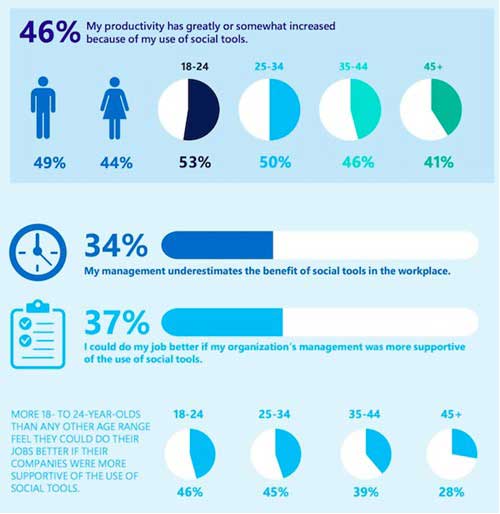