Get the latest on Apple's freshest products (and less-fresh promo vid), plus a retailer's use of Instagram for creative couponing, Twitter's "buy" button experiments, and a Tinder for marketers and agencies. Skim to taste the buzz!

Tweets of 9/11 past. Feeds were packed with memorials marking the 13th anniversary of the attacks of 9/11. On Thursday, former White House press secretary Ari Fleischer, who served under George W. Bush, livetweeted  his experiences of the 2001 tragedy as it unfolded, creating a layer of informational intimacy that we didn't have before. We relived those first moments of learning the news as he describes the President's reaction to hearing it... while in an elementary school classroom he was visiting. The livetweets include both video and images. See more on his Twitter account, @AriFleischer.

Here's the scene in the President's private dining room off the Oval Office after we arrived. pic.twitter.com/5fET4K15Y8

Memorial-tweet with caution. Not every 9/11 mention was met with positive attention, and one Twitter user in particular spent much of the day sarcastically responding to brands who recognized the day. Many of those tweets are funny and reflect how people feel when they see a brand get involved in what people consider a marketing no-go zone. An event this emotionally charged is often a losing proposition for brands: Is the best position non-promotional reverence, silence, or a charitable act? Whatever you decide, be ready to assume both positive and negative responses, and avoid acting out of character, which quickly attracts derision.

@DunkinDonuts @seanbonner Those people left a hole in our hearts, and in our donuts. #neverforget

Got the time? Apple does. Apple's announced a bigger, slimmer iPhone 6 and iPhone 6 Plus, and an Apple Watch that'll go on sale in 2015. iOS 8, built to support your new must-have phone, comes out later this month—so don't download that update unless you want a way slower iPhone than you already have (until you buy the new hardware. Flashback to The Oatmeal's take on [what it's like to own an Apple product between the iPhone 6 and 6 Plus, and here's how the Apple Watch will change your fitness regime (Apple hopes).

Below is "Perspective," the three-minute film that Apple screened for its event. Packed with optical illusions, it bears an uncomfortable resemblance to an OK Go video that the band created after pitching its concept to Apple first, hoping for a collaboration. Not surprising: the same production company, 1stAveMachine, made both. But the OK Go version already has 10 million views.

What's topping the Viral Charts? Not so ironically, it's IKEA's "bookbook", a super-clean but tongue-in-cheek plug for its latest catalog, created in the style of a typical Apple ad. Minimalist? Check. Packed with hyperbolic ways to describe simple functionality? Check. Effective? Double-check (9.6 million views since last week!).

Hey, my Netflix feels slow. It may be psychological, but it's just as powerful. On September 10, a slew of top sites, including Netflix, Etsy, Tumblr, and Grooveshark, feigned slower service (by depicting a spinning loading icon) to push the FCC to enact stronger protections for Net neutrality, a principle that means no online content is prioritized above others (in terms of speed). As a handy example of life without Net neutrality, ISPs could block or slow down sites that don't agree to pay them a higher or "premium" fee. The FCC is currently considering new rules since a federal court struck down previous enforcements of Net neutrality in January. Apart from waiting longer for your Etsy homemade bunny site to load, a less neutral Net would easily trickle down to higher costs and less visibility for young sites that don't have Netflix-sized budgets. To weigh in, submit your comments to the FCC by Monday.

Coupon-clippers use Instagram, too. Swedish retailer Ahlens promoted its summer collection, and courted a new market of younger shoppers, with an Instagram promo combining gamification, hashtagging, and discounts. In a series of separate Instagram videos (example here), a number of Ahlens products flashed by. If you were fast enough to grab a screenshot of one and share it with the right hashtag, you'd get the item at half-price when you showed up with the proof at the store.

When a Bud's as easy to share as a Like. For a special birthday promotion this week, Bud Light partnered with gift-delivery and fulfillment firm Gratafy to enable people to give Facebook friends vouchers for Bud or Bud Light. Anheuser-Busch VP of consumer connections Lucas Herscovici justified the campaign by calling beer "the original social network." (Guess that wasn't bars, then.) The campaign was good for Denver and Chicago-based users (over 21, obviously).

Big personal news: I'm getting married! Not really. Marguerite Noriega, director of social media at Fusion, found that by incorporating hot phrases into a Facebook post, she could trick Facebook's algorithms into prioritizing it on her friends' News Feeds. The post in question, packed with handy "life milestone" keywords, headlined her friends' News Feeds for four days. (Looks like exclamation points help a lot, too.) We're not sure whether it'll work for marketing posts, but if you can wiggle "I'm engaged!" into your campaign posts in a clever and relevant way, more power to you—until the algorithm is adjusted, anyway. 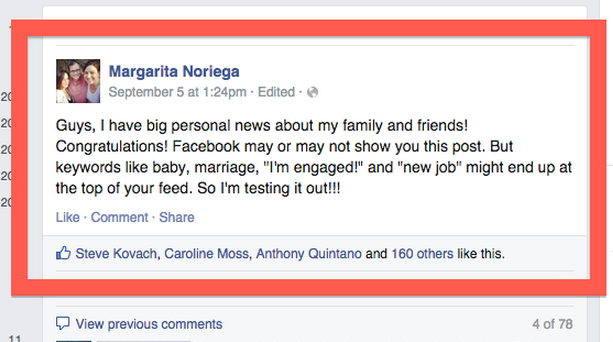 Hey, is that expensive production? No, it's Hyperlapse! Fallout Boy used the free Instagram tool, which lets you make super-stable (and super-cool) timelapses for instant sharing, for its latest video, "Centuries." To create it, the band's agency sent a videographer out into Chicago to create clips, which were later brought together as a tribute to the city. It's already clocked over a million views in just a couple of days, proof of how Hyperlapse, which launched in August, can lend quality-production clout to your creative efforts.

Impulse-buy while tweeting. Twitter's announced plans to test a "Buy" button on select tweets from its test partners. The button will appear for a small percentage of US users; depending on how the tests fare, that percentage will increase over time. Once you click "Buy," you'll get product details and be prompted to enter shipping and product information, which is sent to the relevant merchant for delivery. Partners include Fancy, Gumroad, Musictoday, and Stripe.

A faster way to an agency short-list. You've heard of Tinder , which helps local singles hook up fast by scrolling through photos and starting up a chat. Now there's Pitcher, an app that lets marketers do the same with agencies. To ensure you cover relevant ground, upload a pitch, complete with title, brand category, campaign type, budget, and number of agencies ideally involved. The app will then scroll through Amsterdam's top 80 agencies and provide a shortlist, depending on the agency's specialty, past clients, and media experience. Pitcher is currently available only for the Amsterdam market, but you can test it on Android or iPhone.

How to pitch a ho-hum product. HubSpot's gathered five campaigns that cleverly promote products considered boring. The list includes well-knowns such as Tipp-Ex's "A Hunter Shoots a Bear" and Virgin America's foot-tappin' safety video, but it also includes Esurance's #EsuranceSave30 campaign. You don't need to spend a lot to score big on social, but you might want to doodle out a few brainstorms to ensure you're hitting the right buttons and staying on-message. (Incidentally, Doodle Revolution founder Sunni Brown has great tips for that.)

Don't let a great post become a one-hit wonder. Boot Camp Digital's got an infographic that explains how to promote content, then re-promote it weeks or months later to optimize your reach. Tips include Pinning infographics 4-6 times one month apart, and setting reminders that tell you when it's time to repromote. 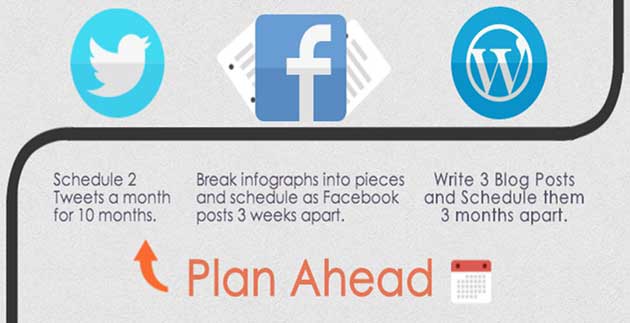 We'll wrap with some quirky pop culture. In this bitingly funny video, video creator Paul Gale "reveals" why Starbucks baristas might often (and imaginatively) spell your name wrong. The video's already scored 2.4 million views by triumphant people who actually seem thrilled to discover the "secret"; more interestingly, it riffs off a Starbucks quirk, which can be perceived as negative, in a way that endears people more to the brand and its people. That isn't easy work, but it's social media gold—and Starbucks is laughing along with him.