Get the latest on the Nobel Peace Prize winners, Facebook Stickers, improving your Pinterest SEO, and an exhilaratingly scary South Korean guerrilla stunt. Skim it to take a social leap!

Say hello to the peacemakers. Kailash Satyarthi of India and Malala Yousafzai of Pakistan received the Nobel Peace Prize this year for their brave efforts in supporting education for kids. Malala, the youngest person to ever win the prize, was shot in a schoolbus by a Taliban emissary in 2012... and she hasn't stopped speaking out since. And though Malala doesn't use Facebook herself, users have produced over 17 million posts congratulating her. See Malala's speech on Digg. (Satyarthi—a longtime child education activist whose work has freed countless children—got a lot of love, too: He's now the second most-popular Nobel laureate after Martin Luther King, Jr.)

Building on that, The Wall Street Journal published a piece on how the Nobel Prize Committee got social-smart. Last year, after noticing fewer visits on its webpage, Nobel Media jump-started social operations. Since then, it's broadcast Facebook posts, SoundCloud soundbytes, and nearly 500 tweets over the course of the awards, more than doubling its follower count (it's now 102,000) since the prize announcements went out. Follow the committee at @NobelPrize.

Check out our #infographic on impact of conflict on girls' education #dayofthegirl #NobelPeacePrize #MalalaYousafzai pic.twitter.com/ZrJzGf6hoa

The 'truth' about the pink slime. In 2012, McDonald's—the most well-known and most-often-criticized fast food brand of them all—published a video explaining how food is prepared for its TV ad photoshoots, to help people understand why what they order doesn't look like what's on TV. Now it's hoping to build more transparency cred with its latest, "Our Food, Your Questions." Via Facebook and Twitter, fans can send McD's their questions about food preparation. A series of videos will respond in a friendly and fun-to-watch way (all while attempting to prove it has nothing to hide!) And to boost production cred, it's enlisted Grant Imahara, former co-host of Mythbusters. What we've learned so far: There's no pink slime.

Want repeat business? Think past the sale. DBD International published a lovely case study for Mega Co-op, a consumer cooperative, to teach us about the one thing brands forget when they're marketing: the after-the-sale effect. Brands that exceed expectations by producing value after the sale tend to do better than in other campaigns (in the limited tests conducted, 300-500% better). The best way to do that? By expressing quality and bringing value wherever people come across you (that means no random Caturday posts!) Apply this to your social strategy: Use high-res images that are optimized to each channel you're on, and ensure you're adding a relevant brand-related value to every eyeball that falls on your posts.

Because emoticons lacked pathos. In a singularly bewildering move, Facebook's announced the introduction of stickers in comments. Stickers are like larger emoticons, which you can activate by clicking on the little happy-face in your comment box and opting to add a sticker. They were already available in Messages; and though most Stickers are free, it's likely Facebook will introduce paid versions later. "I think stickers will allow people to reply to a variety of posts in a more fun way than words alone," writes Facebook's Bob Baldwin. "You can now easily show your excitement for a post with good news, cheer up a friend who's feeling down, and express a variety of more nuanced reactions." Experts remain unconvinced; and as one Twitter user put it, "we've come full-circle to hieroglyphics." 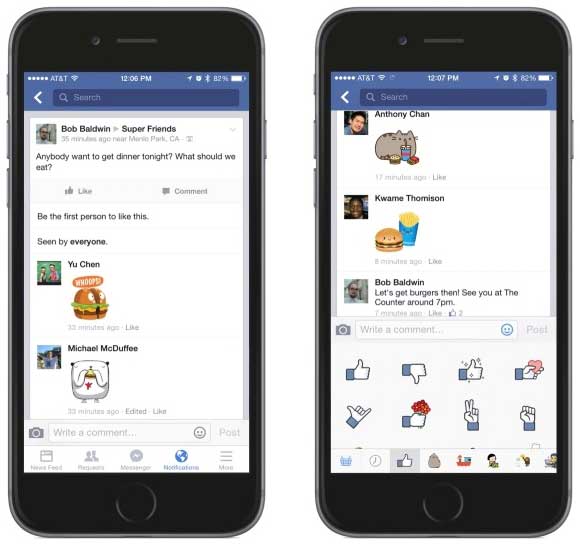 Boost your Pinterest SEO. An engineer provides seven tips on how to ensure your Pins get the visibility they deserve. One quote we loved came from Tailwind CEO Daniel Maloney at SMX East: "Twitter is mostly about what I'm doing; Facebook is about who I am; Pinterest is about who I want to be." Tips include verifying your website (you'll get more clout in Pinterest search), installing Pin It! buttons, using Rich Pins (shown below), and testing Pinterest-style promotions on other social networks ahead of its Promoted Pin ad rollout. Why? Retailers already using the product on Pinterest are seeing higher clickthroughs than on Facebook. 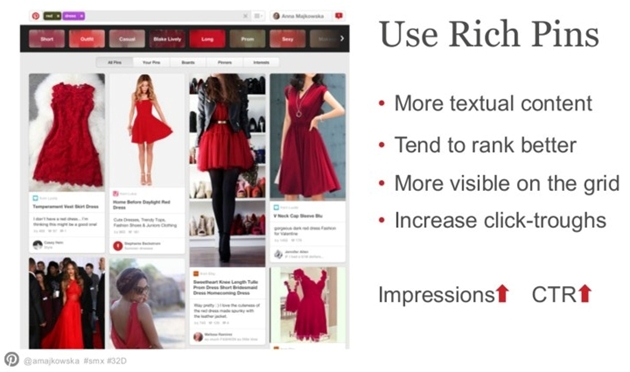 Bing exposes your Twitter stats. Bing, the underdoggiest search engine of 'em all, now exposes  the number of Twitter followers advertisers have when they show up in search results—one fruit of a partnership Twitter's had with Bing since 2009. This will make it easier for Bing users to make a judgment call about what types of ads to click on, in addition to seeing your review status and other annotated details. Don't scoff quite yet: Per Adobe [PDF], Bing's driving higher revenue per visit than Google and Facebook. 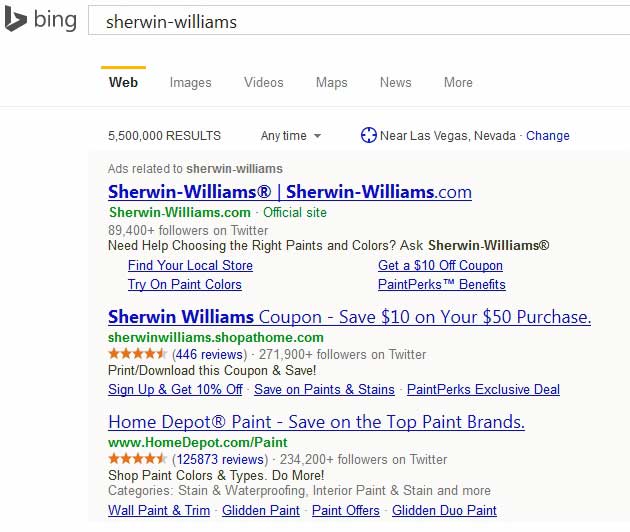 Score that Q&A for a big star-boost. This week at MIPCOM, Facebook brought attention to one of its biggest engagement assets: Q&A, which is a way for public figures and celebs to host question-and-answer sessions. Now BumeBox, a partner in Facebook's Public Content Solutions program, is making Q&A-building a snap. Its dashboard lets Q&A moderators view new questions, add good ones to a queue, and track questions and answers with ease. 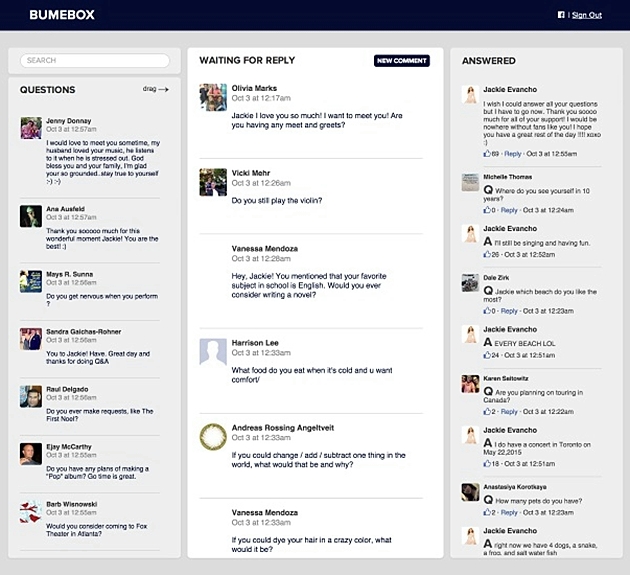 Organic reach slides 50%. Adobe Digital Index released its Q3 Global Digital Ad Report [PDF]  and—surprise!—Facebook organic impressions for brand posts decreased 50%, while paid impressions rose 5%. (In fairness, this might just be the sheer amount of advertisers fighting for the same limited News Feed space: Media companies' postings grew 100% year-over-year. Of them, retail showed the most interactions, up 13% YOY.) The report warns that advertisers will get even more aggressive over the holidays... so if you want to be seen, start setting some media budget cash aside for the bump.

Could your cover use more oomph? Dynamic Cover lets you use your Facebook cover photo—the most prominent image on your page—to boost engagement. Use Dynamic Cover to schedule automatic updates to your Cover, for example to coincide with events or milestones; launch polls, with the results appearing in the cover automatically; and launch contests with winners' photos embedded. The tool is available to page admins for $49.99 a month.

Using LinkedIn Publishing to grow your personal brand. As platforms get more fragmented, it's hard to know what to prioritize and where to park what content. Krista Neher's written a piece about harnessing LinkedIn's Publishing Platform; it's packed with practical tips and images from her own LinkedIn page. She'll answer burning questions such as "What should I post on LinkedIn?" and "What if I already have a blog somewhere else?" Dig in. 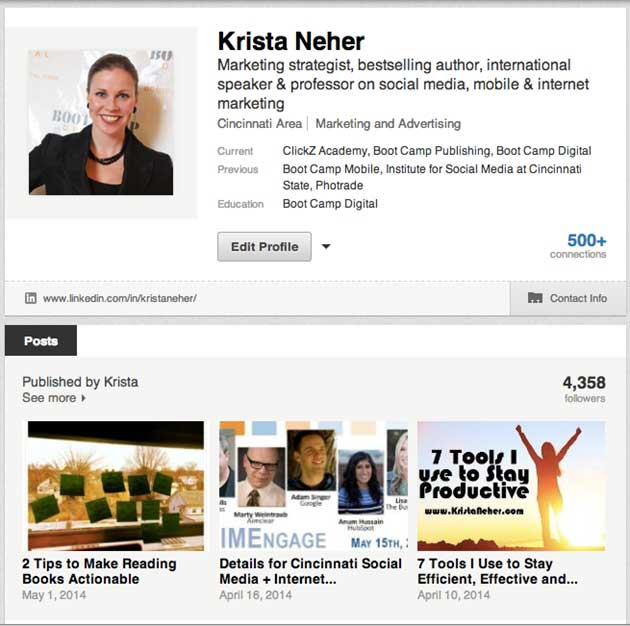 Waiting on kids. Today in less-conventional social news, Apple and Facebook have agreed to include the freezing of female employees' eggs into their paid healthcare benefits, which set off an outcry about how this "good deed" on their part actually expresses their desire to keep people overworking and putting families off. Per the Guardian, the gesture tells women to "work really hard through your most fertile years and then when you may not be able to have kids anymore, you can give it a shot with the eggs we froze for you as a perk." Is the more ominous implication that if you have children at the wrong time, it's the end of your career?

Something you knew, packaged more nicely. Forrester Research is pushing old (but still-relevant) data in a new way: by converting them into bite-sized infographics that it can share on social networks under the hashtag #forrbigdata—better positioning it as a Big Data authority. Here's a tweet about the power of digital customers. The data's from a year ago... and while the visual isn't the prettiest, it highlights a bigger priority on Forrester's part to make data easier for all of us to consume, anywhere we like.

Snapchat's creepy parasite apps. You already know that even though Snaps on Snapchat disappear, they don't really leave Snapchat's servers. Unfortunately, unauthorized third-party apps have access to those images too (worrying, since youth sexting is increasingly seen as a "social currency" we won't easily be rid of soon). Recently, anonymous forum 4chat claimed to have access to a huge collection of photos and videos from one such third-party app, questing for nude images sent by women who don't know about this back-door. The cache likely contains 200,000 stolen images (mostly of children); though none have appeared publicly yet, Snapchat claims it's not the source of the leak. The problem is, it doesn't seem to be acting on increasing its security fast enough. (Not everyone's unhappy: One company is using a clever play on words to benefit from the leak by using it to promote its event planning business.)

We'll wrap with an unexpected sporting challenge! To bring the outdoorsman out in its clients, The North Face in South Korea launched a stunt whereby the floor under buyers in its store suddenly disappears—forcing them to either climb or fall onto a soft, cushy bottom. The thought of its happening to us is terrifying, but everyone looks relieved enough to cry when the end of the challenge gives them a nice surprise for their efforts. The video's gotten 3.9 million views, and we like it for the fun factor as well as the brand's decision to reward users whom it has downright terrified.