See how stars and fans alike mourned the passing of Leonard Nimoy. You'll also see Instagram's new ad formats, how House of Cards viewers tweet, and what drives customers to make social recommendations. Skim to stay in the know.

He lived long and prospered. Last Friday afternoon, Leonard Nimoy, better known to us as the original Spock, passed away at age 83. Over the weekend and throughout the week, social networks brimmed with tributes to the actor, whom NPR credits as one of the first major television figures to struggle with a mixed-race (half-human, half-Vulcan) identity. To honor him, the Canada Design Resource encouraged people to transform former Prime Minister Wilfrid Laurier into Spock on five-dollar bills (shown below), co-stars like George Takei shared their grief, astronauts gave the Vulcan salute him from space, and William Shatner held a "social media shiva," where he answered questions on Twitter about their friendship both on- and off-screen.

Nimoy developed the Vulcan greeting "live long and prosper" himself, and continued to use it throughout his life. Below is the last tweet he wrote before passing.

A life is like a garden. Perfect moments can be had, but not preserved, except in memory. LLAP

Is it brand-safe? A breakdown on socnets. The 'Net is inundated with social networks, so TBWA/Chiat/Day LA's Rohit Thawani burned through all the newest ones so you know what to test... and what to ignore. Yik-Yak? "This is like a truck stop bathroom wall," he says simply. Whisper: Great "if you want to do a leak or something for a product you have." And for our favorite, RapChat: "This is like Snapchat but you send raps. They give you beats and you freestyle over it and send it on. And advertisers can create their own custom beats and do that. My verdict is: hell yes." See the full presentation:

A few fewer Likes. Facebook's once again adjusted its algorithm so that Page Likes no longer include deactivated accounts or accounts held by people who have died. Overall, this means your Likes will be a more accurate representation of people likely to see your content. But in the short term, especially for longtime Pages with a high volume of Likes, expect a drop.

Instagram ads: Now clickable, and with carousels. Instagram's launched Carousel ads, which let you create a slideshow out of a set of images (users must swipe to see other images in the set). For these particular ads, you'll also be able to click to buy (or simply learn more). The new program will be rolling out in weeks to come; formatting may change as Instagram optimizes it for a broader audience.

Need motivation to make the Instagram ad jump? AdWeek provides four reasons marketing on Instagram is better than on Vine (unless you're a Vine vlogger, in which case... go you!). A quick run-through: Instagram has more users (300 million, to be exact), it has filters, it's owned by the biggest socnet in the world, and it gives you 15 video-rich seconds versus six. You do the math.

Now you can embed Twitter videos. Now when you click on the "..." section of a tweet, you'll have the option to either embed the tweet or embed the video. Embeds are available for videos taken and uploaded via Twitter apps for both iOS and Android, as well as for Twitter Amplify brand partners. See examples here, and here's how a proper video embed looks:

We agree with our partner @Dove: the power is in our hands to #SpeakBeautiful. https://t.co/hQXoiqR8cR

The anatomy of a perfect Twitter response. Leadsift's created an infographic that explains what elements you need to ensure your responses to clients on Twitter hit home. Did you know a hashtag can increase engagement 15%, or that "Click" is a better call to action than "Find"? Now you do, and then some. It's all below. 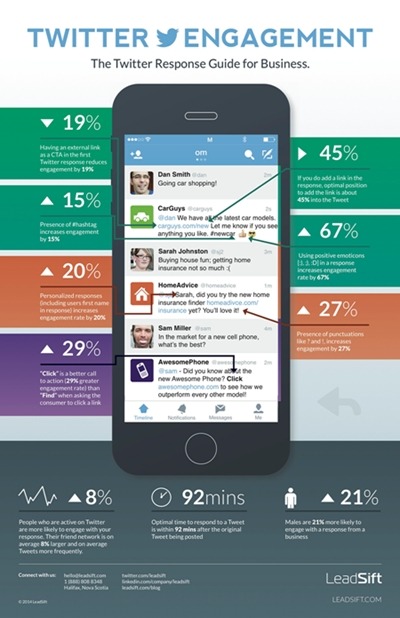 What drives a social recommendation? A Social Media Link infographic breaks it down for you: 54% of survey respondents use Facebook to share product purchases, and 93% will splatter you with social love if they've had "a positive experience with the brand"; 79% will do it if they receive "a free product or sample." Watch out... poor experiences can be just as social: 71% of respondents will share a negative experience. But you knew that already. Below you'll find a part of the infographic that covers which social media outlets people trust most. Trust in Pinterest rose to 64% in 2014. 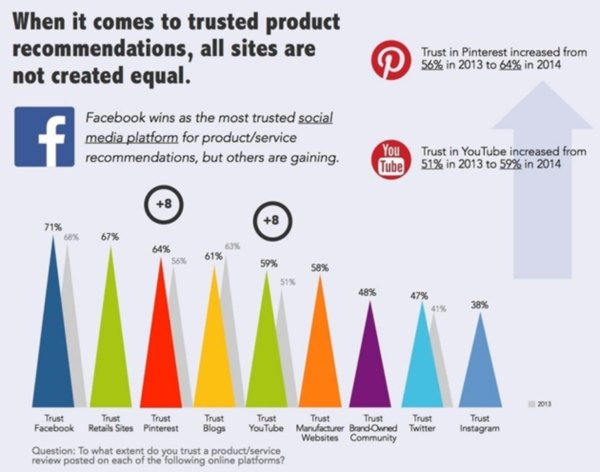 Need some hilarious (and free!) stock photos? To promote the film "Unfinished Business," Twentieth Century Fox joined forces with Getty's iStock to create a passel of funny office-related stock photos, featuring Vince Vaughn and co-stars, including Dave Franco and Tom Wilkinson. In total, 12 images are available to download free for a limited time—as long as they're used for editorial purposes. Have at it. 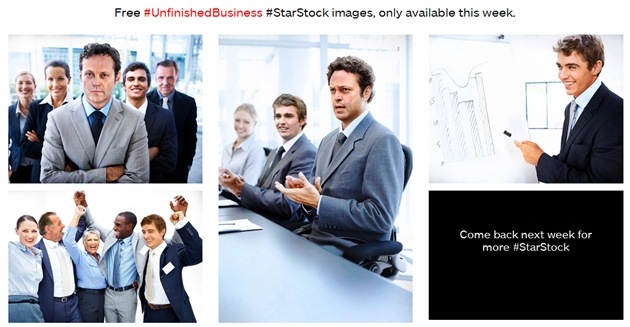 Who's tweeting about House of Cards? If you're done binge-watching Season 3 (released this weekend) and need something to quell your withdrawal, Stat Social's made an infographic (we got piles this week!) that tells you who the other fans are: 53% are men, and their top cities include New York, Los Angeles, Washington, DC, Chicago, and Toronto. HoC tweeters are also—perhaps unsurprisingly—2.8 times more likely to be interested in screenwriting than the average user, and favorite interests include clothing. (Speaking of... boutique service Looklive.com lets you buy all the clothing worn by cast members. Nice catch, guys. P.S. Looklive is one of my clients.) 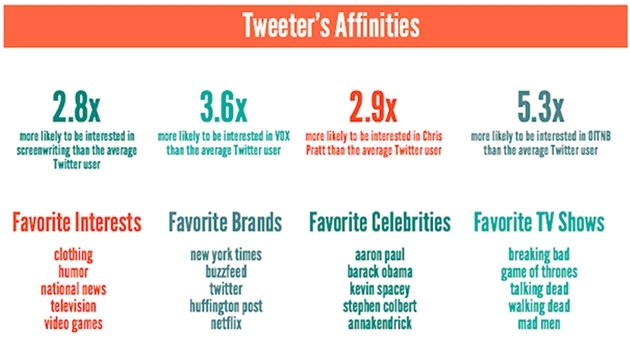 We'll wrap with some Disney magic. Last month the Mickey Mouse Facebook page featured video of a recent stunt it pulled in a shopping mall. When people walked by a glowing white panel, they saw their "shadows" as Disney characters. The effort brought nostalgic figures to life among both adults and children (and not a costume in sight!). Since its launch, it's been viewed nearly 57 million times. That's magic.