See the top brand video spreading across socnets, learn more about Facebook Topic Data, and find out why people unfollow brands—and what kinds of engagement to expect for your social media content. Skim to keep in tune.

A fitting end for a well-penned life. Prolific fantasy author Terry Pratchett passed on after a long struggle with Alzheimer's, and users took to their socnets to pen tributes to him. But we were most touched by the memorial from his assistant, who shares Pratchett's Twitter account, @TerryandRob. In true storyteller style, Rob introduced the character of the Grim Reaper into Terry's last few tweets, concluding, softly but definitively, with The End. The father of Discworld would have beamed.

Terry took Death's arm and followed him through the doors and on to the black desert under the endless night.

Love has no labels. At the top of the Viral Video Charts is the Ad Council's effort for Valentine's Day. A public panel shows two skeletons playing, hugging and kissing, after which their owners appear, breaking down stereotypes in the name of blind love. On Facebook alone, the original post was shared 1.3 million times.

Say hello to Facebook Topic Data. Facebook's opened a new analysis feature, Topic Data, to select partners. It "shows marketers what audiences are saying on Facebook about events, brands, subjects and activities, all in a way that keeps personal information private," Facebook says. If you're part of the trial, use this data to produce posts optimized by relevance and create more granular product road maps. It will also be easier to measure brand sentiment, decide what products to stock, and find out which demographics are discussing various facets of your product. Long live Big Data.

60 Twitter tools and tips. Hurtin' for a new cross-account programming platform? How about a link shortener or a trends analyzer? Here are 60 tools and tips made just for Twitter. A few we love: Topsy (for searching through and analyzing trends and tweets), Storify (for building a story that involves a lot of people—then sharing it), MyTopTweet (the 10 most popular tweets of any account) and twtpoll, for polling people who follow you. Tweet away!

Where do you put that video? @TheBuzzer, a show created by Fox Sports network for social platforms, explains where it puts its videos and why. Twitter is for in-the-moment stuff: Instant replays, or stoking the fire around a given topic. Facebook is where "second-day" stories, or its analysis of recently broken news, live. And YouTube is for less topical, evergreen stories (whereas timely stuff is pushed to either Facebook or Twitter). If you're hunting for a social video strategy, this one's a good start.

The #Bills, #Jets, & #Dolphins have made big moves but @anezbitt has 2 reasons why #Patriots are best in AFC East. https://t.co/KGrUpv2x6k

What interactions will you get for your content? News Whip took a look at how content types affect interactions on Facebook. First discovery? It depends what kind of page you're running (celebrity news, politics, gaming, etc.). The headline also affects whether people will simply Like or actually click through, so be sure to A/B-test. For example, stories or titles for which the subject or outcome are clear, like celeb news or breaking news events, might get a Like but not a click-through. Political news generates lots of comments, as do long-form articles, especially paired with click-baitish titles (like the one below). Listicles and interactives? Total share-bait.

Want more e-commerce sales? Stack up on social reviews. A report (PDF) from Bazaar Voice demonstrates how more social reviews drive higher purchases. A hundred could boost conversions by up to 37%, whereas 200 could push that figure up to 44%. It also shows how different ratings can contain different insights: one- or three-star reviews can reveal product flaws, while three- to five-star reviews are rich fodder for new products or features. What's more, customer-written content keeps sites dynamic, boosting SEO. Dig in! 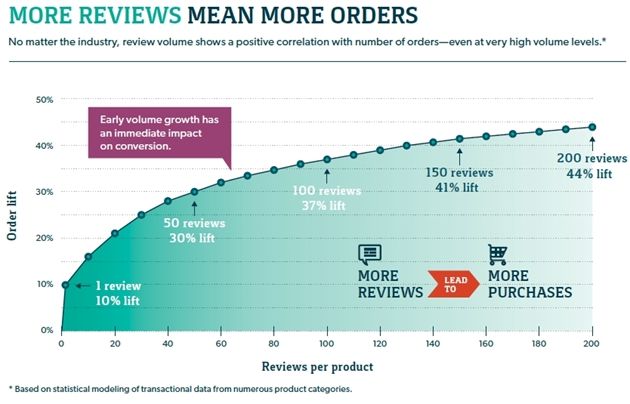 Why are people unfollowing me? Don't feel forsaken. Fractl and Buzzstream surveyed 900 social media users to learn the answer to this question. (See the full infographic.) 21% of users said they unfollowed because of repetitive, boring content; 19% because the brand posted too often (over six times per day). Unfollows can also result from offensive activity or content you post that's irrelevant to your service. Time to start cutting down on Caturday posts. 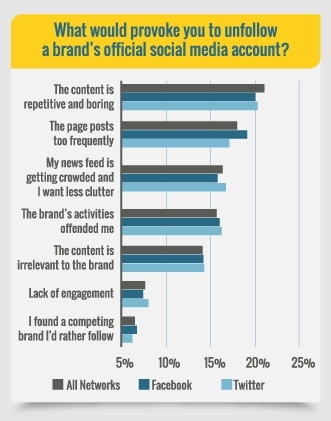 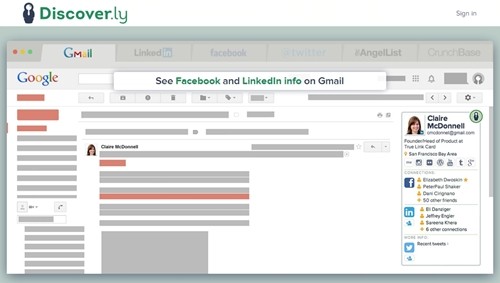 We'll wrap with some storytelling inspiration. On the heels of a Gap microseries, Comedy Central's launched the first episode of a short-form Web series via Instagram account @atmidnightcc. The cleverly-named "Plot Twistagram" is like a choose-your-own-adventure: Each week, producers ask fans to submit ideas for the next episode's plot in the comments section of the current episode. Showrunners produce their favorite one. Below you'll find the first episode. How can you use Instagram to flaunt your storytelling skills?

Plot Twistagram Episode 1 - Your mission, should you choose to accept it: Tell us what YOU want to see happen next! We'll choose our favorite idea and shoot it! This is a new interactive series exclusively on Instagram brought to you by the @atmidnightcc digital pod. Every Monday we'll release a new episode based on what you decided should happen. Leave your suggestions in the comments section below. Good luck and get creative! #PlotTwistagram