Check out how Facebook's preparing you for Valentine's Day, how to curate and plan content (even if you don't have tons of your own), and how Vine plans to win over kids (and parents). Skim to seize the day!

When puppies upstage halftime. This week's viral chart-topper was, perhaps unsurprisingly, a Budweiser Super Bowl ad that revisits the Clydesdale and puppy whose friendship won so many hearts over the past few years—making this the third straight year that a Budweiser ad's been the most-shared. Newsweek recaps the game's big ad themes (dadvertising was hot), and Venture Beat scored them. AdWeek explains what it takes to win the Super Bowl: Serving up the unexpected and having a war room. But maybe things really boil down to knowing what fans like (chips and beer).

This year's Super Bowl ranked the most-watched show in American TV history, which means that even if you're a Seahawks fan, you did win a little. It also means that Katy Perry's perplexing halftime show was the most-watched ever, yielding plenty of memes for a GIF-thirsty Internet. The most popular of those was the dancing shark. Walkaway lessons for brands looking to score in 2016? Wordplay and teasers help, but—crucially—be culturally relevant (which probably means be compulsively meme-able).

Left Shark isn't the hero we need, but the one we deserve. https://t.co/KcCHQ6QuXa pic.twitter.com/COlofdlcUB

When the Medium hijacks your message. Obama revealed his 2016 fiscal budget strategy and posted the complete document on Medium, a three-year-old self-publishing platform, initially targeted to social influencers and created by Twitter. (Medium conveniently tells you how long it takes to read its articles. The budget will take 3 hours and 51 minutes.) If the target wasn't obvious enough, he also wrote Millennials a love letter on Medium about their role in shaping the new American economy. "We've bet on America's young people," POTUS writes. "And today, I'm betting that you'll continue unleashing new ideas and new enterprises for decades to come." (Also, Like and Share!) Some media institutions were critical of the act; others were more open to this administration's efforts to be social in the modern sense. It probably says more about us than about the gov that its budget-sharing tweet scored fewer shares than Budweiser's Clydesdale ad.

Real-time tweets return to Google—giving you yet another incentive to tweet often and with relevance! Google's made a deal with Twitter to show up-to-the-moment tweets in search results, starting later this year. The move will doubtless drive brands to tweet more often to score search juice; and if the engagement justifies the activity, Twitter will likely enjoy higher ad revenue this year.

But that's not the only place Tweets will appear... Twitter's also inked a deal to syndicate Promoted Tweets on partner sites and apps owned by Yahoo Japan and Flipboard, meaning sponsors will get plenty more bang for their buck. The ads will share the same look and feel as the platforms they appear on, but Twitter hasn't explained how the integration will work for tweets that include videos, which it wants to focus on more this year. In any case, if this works out well, expect Sponsored Tweet costs to rise (again)... and for a whole lot more media companies to sign up for some paid tweetage. Below, an example of what a Nissan-sponsored tweet might look like inside the Flipboard app: 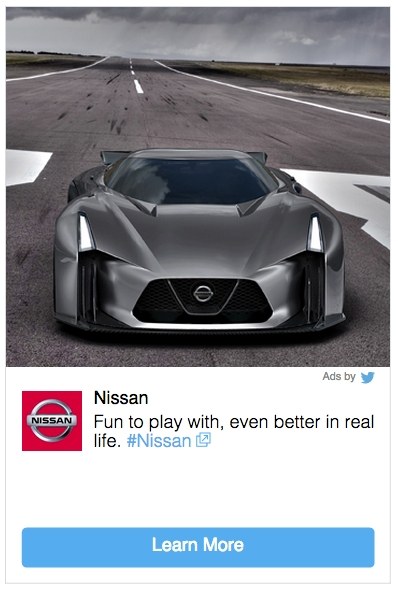 Say hello to Quick Promote! Twitter's been busy. To facilitate impulse Sponsored Tweets, Twitter's launched Quick Promote to appeal to small and midsize businesses. Why risk your ad dollars on a big untested Twitter campaign? Instead, use Twitter Analytics to see which of your existing tweets perform best, then use Quick Promote to amplify that tweet directly from your dashboard. The tweet will go out to users whose interests match your follower base. "We found that users who see a relevant Promoted Tweet from an SMB are also 32% more likely to visit that business," Twitter chirps. Heigh-ho.

Snapchat goes Hollywood. In late January we learned that Snapchat would launch a super-tiny series called "Literally Can't Even," with writers Sasha Spielberg and Emily Goldwyn—the kids of Steven Spielberg and John Goldwyn, respectively. Each episode is under five minutes and uses a lot of split-screens to pack in as much detail as possible. Each one vanishes after 24 hours. The show's just launched on Snapchat Discover, and critiques are scathing. The verdict? "Literally Can't Even" imagines young people the way "grown-ups" do, and its efforts to feel savvy within the most volatile social platform to date drop with a dull thud. We're sure this won't stop Snapchat, though: Everybody wants their own programming. 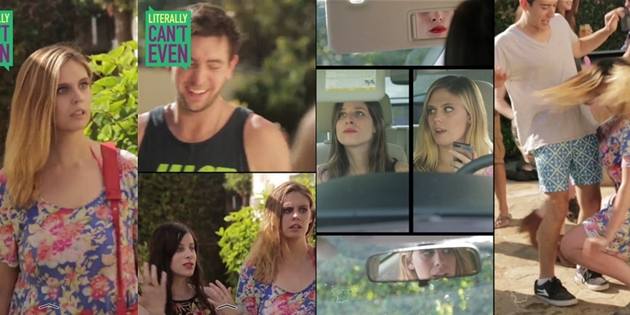 Instagram now loops videos! Like Vine, Instagram's videos will now play continuously so you don't have to hit "play" to repeat-watch something. The feature made headlines when The Gap launched a micro-series that uses the looping function to its advantage: "The nature of the videos is that you get something different every time you play them," says Gap global leader of consumer engagement Tricia Nichols. "The story twists and turns, and there are little Easter eggs. So it's the perfect opportunity for video loops." The series dubs itself the "weirdest love story ever Instagrammed"—and it's also the best method ever for Gap to flash us its spring clothing line. (Shop the looks in the video captions.) Goodbye runway shots, hello original content?

Get ready for a strange spring with @jennyslate and Paul Dano, in the weirdest love story ever Instagrammed. #SpringIsWeird Follow the 12-episode film series and shop the spring looks you see at the link in our profile.

Vine wants your babies! Speaking of infinite loops, Vine—Twitter's video-looping brand—released Vinekids, a version of the app that produces only fun, safe content for children. Functionality-wise, it doesn't feel any different, but the clips are made for children and surrounded by animated creatures. Kids can swipe back and forth to find new videos and tap their screens for sound effects. For now, though, it's only available to people with iOS phones, and a limited supply of content means kids tear through those six-second vids pretty fast. Users are not yet able to upload content—but we bet you anything that Vine's staffing up on parent-friendly moderators.

How do you plan content if you don't have much? Scoop.it's got the answer to that question. Hoping to help SMBs in a lurch, it's launched new features that help you use curated content to boost your authority. A primer: Scoop.it automatically curates content that you're interested in, based on keywords, then lets you publish links to that content, plus a handy introduction written by yourself, online. The new stuff: A calendar lets you plan what you want to publish on your blog, social media channels, newsletters, and website. A "smart scheduler" automatically tells you what time content should be published on each channel. The feature works with WordPress, Mailchimp, HubSpot, and Marketo. Finally, a dashboard measures the performance of all content for views, visitors, and engagement. Happy scooping. 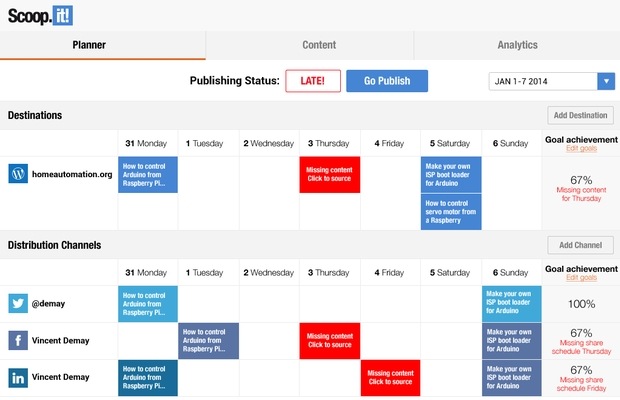 Because celebrity sharing is celebrity caring. Facebook Mentions, an app that lets celebrities and influencers track mentions of their names and share content with fans, now lets those same people share content on Instagram and Twitter. All your neighborhood celeb has to do is create a post using the app, then click on the menu button above it to pop it onto different platforms. They can also add topics of interest, including other (competitor?) stars and hashtags, to their feeds, letting them track a wider scope of conversation than just themselves. Say hello to Miley... everywhere! 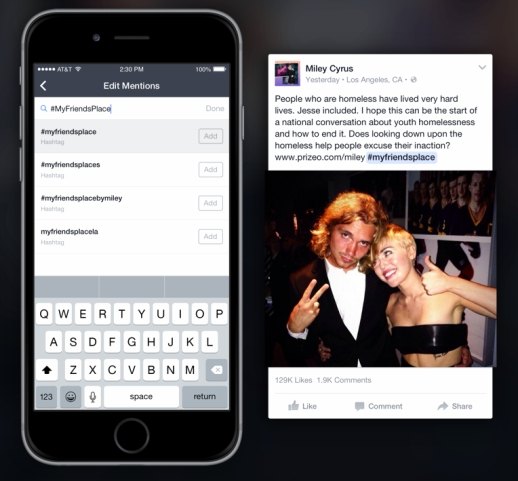 We'll wrap with a very Facebook Valentine. Valentine's Day is the next big (plannable) event on the real-time marketing hit list. To get you ready, Facebook's created an infographic packed with stats about how people fête the big day on the site. Notables: Over 1 million US users changed their relationship status within four days of V-Day last year. Singles talked about sex the most on the day, while men in open relationships and women in domestic partnerships did the opposite. And 64% of women, and 68% of men, start planning for the day a week in advance or sooner. Now you can, too. 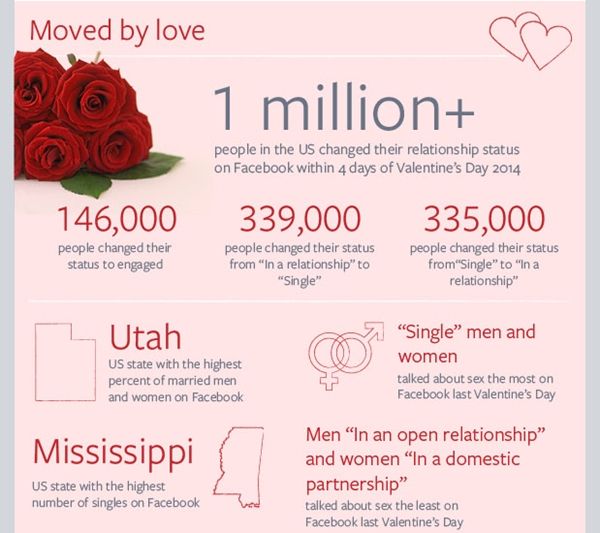