This week, get the breakdown on YouTube's 360° ad format, and new tools for managing native Facebook content. We'll also tell you about Airbnb for Business, which hashtags Instagram bans (and why), and how to maintain your social prowess among vacationers. Skip to stay in step over the summer!

(Editor's note: We're publishing this issue of the SocialSkim a few days after the usual Friday slot because of unforeseen technical difficulties last week.)

It isn't every day a fun new ad format is born. YouTube's 360° ads let users explore different angles of your videos by dragging their mouse or moving their phones up, down, left, or right—meaning they're super mobile- and engagement-friendly. Use them for something experiential (like skydiving or exploring an interesting space). Bud Light was the first to launch a 360° video ad running in TrueView, one of which you can check out (and play with!) below.

The new format is available in Chrome and on the YouTube app in Android and iOS. To create it, you'll need an approved 360° camera: Ricoh Theta, Kodak SP360, Giroptic 360cam, and IC Real Tech Allie. Learn how to upload the video here. To run a TrueView ad campaign, head to AdWords.

Google's launched an iOS version of Spotlight Stories, a hub for playing 360° films on your phone or tablet. Tilt to explore different parts of what you're watching. The few movies included so far are short, like animated film "Windy Day" and a live-action film called "Help." 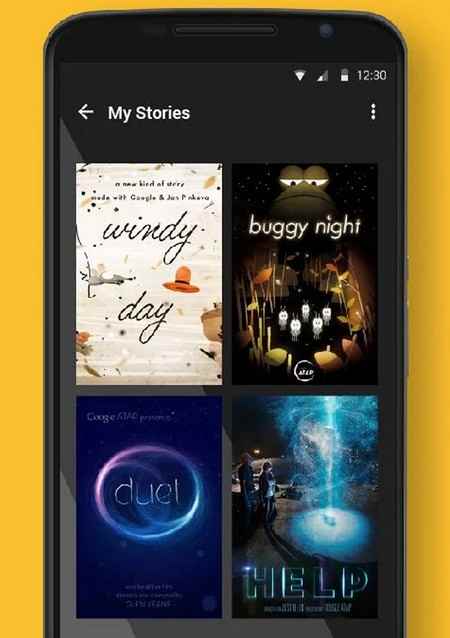 What better excuse to start fooling around with YouTube? A report from Google and Pixability finds that both viewership and publishing are rising. And the world's top 100 brands, per Interbrand, are leading the ad charge: Apple, Coca-Cola, and IBM boosted YouTube ad spend by 60% year-over-year.

Across the board, the top 100 marketers increased spend 40% YOY, with branded content views nearly doubling in the past 12 months. Who says advertising's dead? 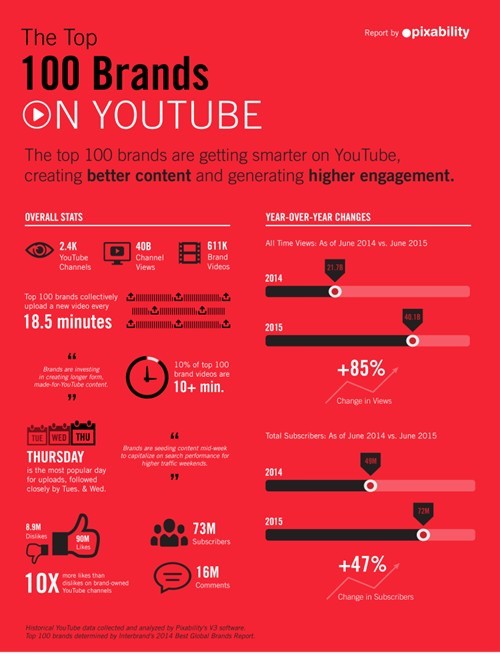 It isn't all roses for YouTube. Facebook's still a major source of captive attention and referrals, and it wants people posting videos natively, not via YouTube. To ensure the message goes mainstream, marketers who attempt to share a YouTube link will now see a moody little message, packed with an incentive: The promise of more views, and Insights tracking. Game on.

Facebook's YouTube rage isn't idle. To tempt serious video creators, it's introduced a bevy of new features, including Video Library, which lets you manage all the videos you've ever created from one place; Secret Videos, which lets you post videos that can be seen only with a direct URL; and the ability to prohibit embeds on third-party sites.

Page owners also have new customization features: Restrict your video audience by age and gender (in addition to location and language), set expiration dates, customize your video thumbnail, and label videos based on interest categories. All Pages will get these features over the weeks to come. 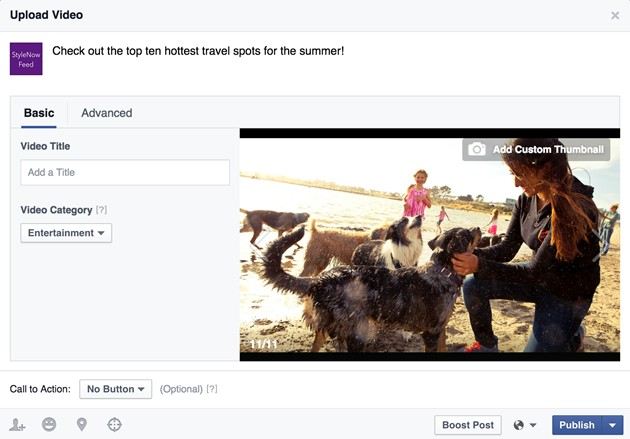 It's easier than ever to associate yourself with a live event (like the Super Bowl). Advertisers on Twitter now have access to a new feature called "Event Targeting," which lets you activate content around live moments. The feature is equipped with three tools: the event calendar, event insights, and event activation. The calendar surfaces major global events and tentpole events, like holidays and festivals. Use it to plan which events make the most sense for you. You can filter by location, date, and type of event.

Event insights tells you more about the audience you might be dealing with, based on data from last year. You'll also see the most-engaging tweets from that period, which will help you come up with creative that might stand out but still resonate with those same people.

And event activation lets you create the campaign. Target by gender, language, and device. You're all set! 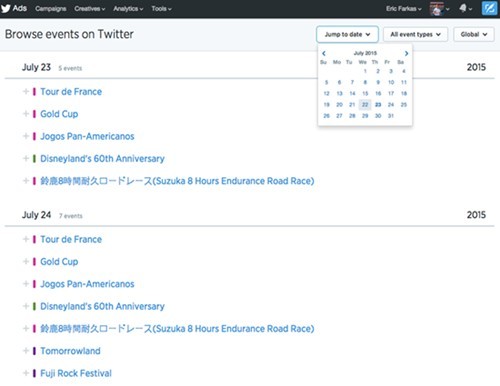 6. Who's winning the Periscope vs. Meerkat battle?

Periscope, but only by the slimmest of margins, per an infographic from GlobalWebIndex: 0.9% of people surveyed use Meerkat; 1% use Periscope. Age distribution is more interesting: Both find most of their users in the 16-24 age range, but Periscope's share is nearly one-third larger (32% versus Meerkat's 19%). For 25-34-year-olds, Meerkat leads, at 54% to Periscope's 49%.

If live broadcasting on either Meerkat or Periscope is something you're interested in, be sure to check out these tips on how to create compelling content on either (or both!). 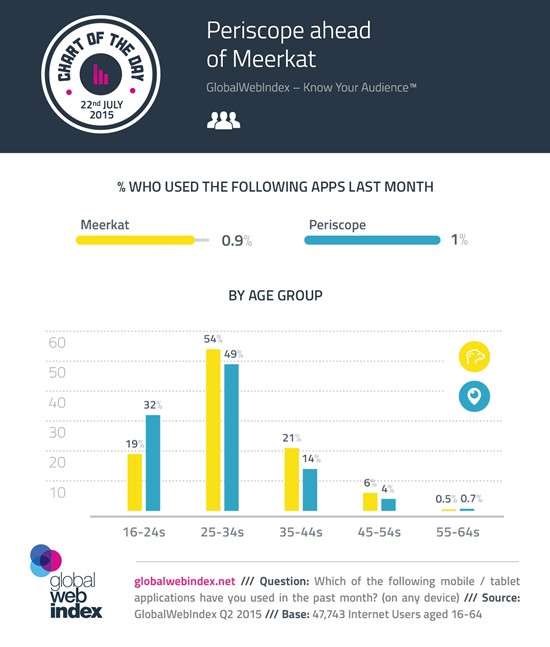 Landing pages for hashtags and locations will also be revamped. When you click on an Instagram.com link, the most popular results will appear above recent photos.

Below, the results of a search we did for Epcot Disney. Are you already imagining the promotional opportunities? 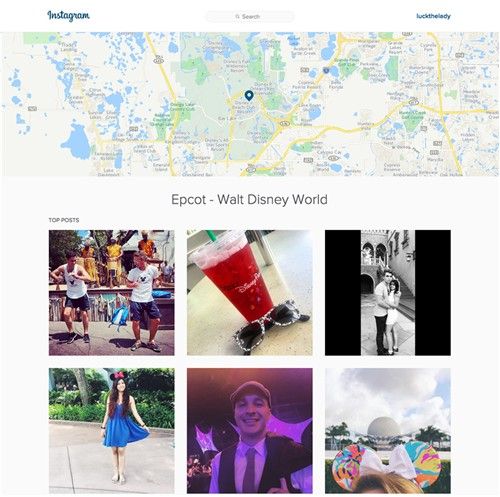 Last week, Instagrammers were incensed to discover their socnet of choice banned the hashtag #curvy—meaning any images associated with it were cut from its search results. The hashtag is usually used by women for other women, to drive a positive body image around curves. (Variants like #curvee have since popped up to replace the original.)

Instagram told Re/code that it bans a word (and associated images) from its search feature when it "returns inappropriate or pornographic results that exceed a certain threshold."

Hashtag or term bans are tied directly to what content is wedded to them; the actual word's meaning is irrelevant. If #happy starts getting too nude, it could just as easily be banned, but sexual or inappropriate terms are permitted, as long as the images they're tied to don't exceed the pornographic results threshold.

Be sure to use hashtags that don't fall afoul of search bans, or those that risk being appropriated by people who could get yours banned. 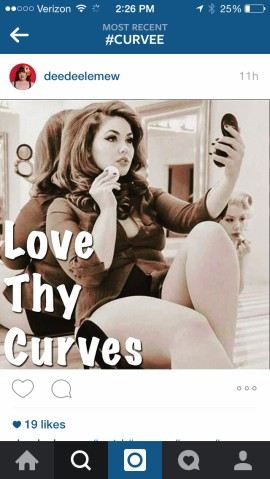 9. Why book a business hotel when there's Airbnb?

Airbnb is increasing its focus on customers who travel for business. Last year it launched Business Travel, which lets companies find accommodations for traveling employees. Some 250 companies so far are using the service, including SoundCloud, Salesforce, Google, and Vox Media, accounting for about 10% of rentals. But Airbnb wants more: US business travel spend will hit $302.7B by the end of 2015, and Uber accounted for 55% of rides expensed by employees whose companies use Certify, a travel and expense management firm.

In the case of Airbnb, money it's earned via Certify rose 143% from the first quarter of 2015. The company's looking for a streamlined way to better serve corporate clients. It now does a lot of things manually, such as helping provide corporate expense documents and highlighting where employees will be staying.

An infographic from Chute tells the story: 73% of people on a voyage connect to their socnets at least once a day, and three in four use social media to share their travels post-trip—91% with photos.

Key for you: user-generated content performs 50% better than stock photography, which is the "most-used and the least effective form of visual marketing." 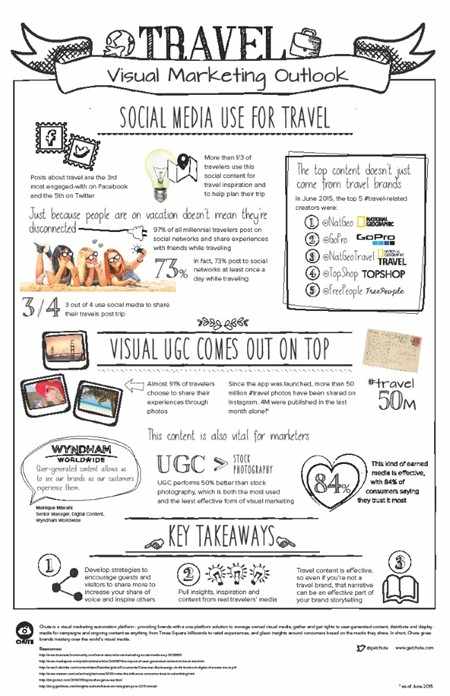 11. We'll wrap with some weird insights

Google Autocomplete is a treasure trove of revealing data: Because it's feeding you what people are actually searching for most often for a given place, you can learn a lot about what searchers are interested in vis-à-vis various countries based on how Autocomplete finishes basic questions.

Fixr published a study and accompanying map about Google Autocomplete responses to searches for the "cost of" in relation to different countries. (An autocomplete for "cost of" will give you the products or items whose cost people wonder about most.) Some are funny (Chile: coke, though whether it's the drug or the drink is not specified); others are terrifying (Mauritania: slaves). Canada and America aren't very fun: The most searched for costs are for a passport and a patent, respectively. 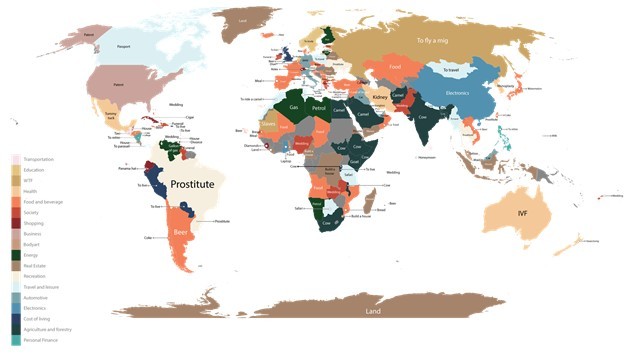 Search Engine Land suggests taking Autocomplete a step further: Use an asterisk to help you identify unknowns in an Autocomplete search, which might provide more insight than you've ever wanted: