Learn everything you need to about Facebook Signal (and how to get journalists interested in your content). We'll also talk about Facebook's 360° videos, how the Emmys did on social, Dropbox's new tools for teams, and Atlas, your new charts buddy. Skim for all the sauce!

Facebook's brand-new tool, Signal, is designed to help journalists discover what's trending, and bring up videos and posts from Facebook and Instagram for both storytelling and reporting. The content can be curated, then embedded into their own work. This makes the 'Book a juicier contender to Twitter, the preferred tool for tracking and sharing breaking news.

Steps for you to take: Find out who your local journalists are on Facebook, and make sure they know where to find your brand. Then consider the newsworthiness of your content: If it's moment-relevant and adds something significant to a local story, journalists can use it. 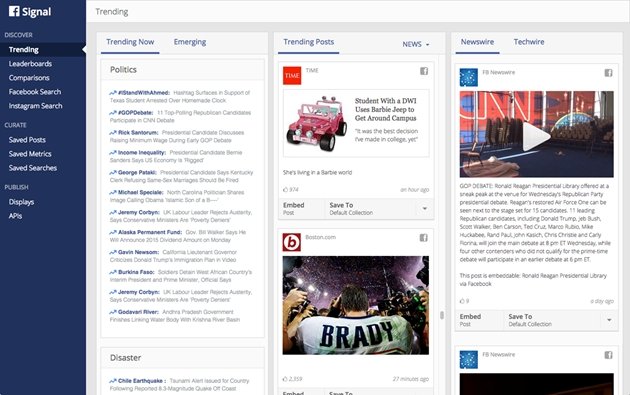 Just months after YouTube released the same ability! This is the first project Facebook created with Oculus since buying it. Expect to start seeing 360° vids in your feed, with a full rollout over the next few months.

To create them, a special set of cameras is used to record 360° of a scene simultaneously. The videos allow users to move their devices around to see any direction in the video. Try it at [this product page, and ask whether it's worth giving users a deeper, more immersive glimpse into your world:

The Emmys marked the most popular TV event this past week. Other stats: 6.9 million Facebook users produced over 14 million interactions; on Twitter, 1.46 million mentions of #Emmys and #EmmyAwards drew 4.54 million engagements.

Viola Davis's win for lead actress in a drama was the most social moment (over 181,000 mentions and 227,000 engagements on Twitter, not to mention 66.2% positive conversation), and the top Emmy-lovin' state on social was California.

Check out the best Instagrams of the Emmys, and we'll leave you with Coca-Cola's epic recognition of Mad Men, which used a Coke ad to wrap up its gripping last season. This post, of course, appeared after Jon Hamm finally scored an Emmy for Outstanding Lead Actor in a Drama Series (after losing seven years in a row):

If there were a "Best Ending to a Drama," we all know who would win. Join us in raising a bottle to #MadMen. #Emmys pic.twitter.com/uAAboocupn

Say hello to [Atlas] https://atlas.qz.com/ , a spankin' new Quartz property that lets you run searches for any charts you can think of. Think of it as your presentation-making buddy. Here's what we got when we ran a search for "Facebook" and "Millennials": 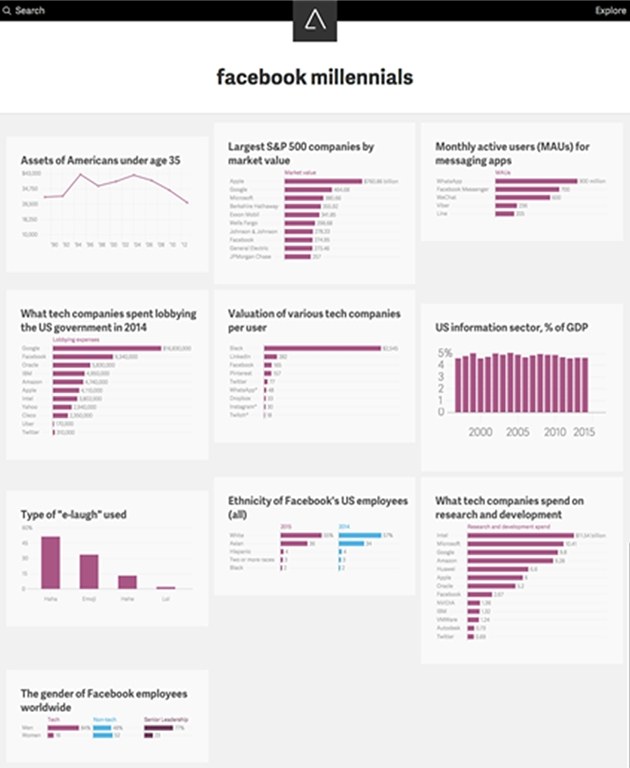 The feature lets small teams organize files with less rigmarole. It will appear for both Basic and Pro users, making it SMB-accessible. The team option will appear on the left-hand menu of the online interface.

After you make one, pop all your necessary files into the shared folder. Each team member gets access—meaning you don't have to set up individual permissions every time you add someone new. Teams can also be subdivided into different groups by projects. The feature was developed after Dropbox learned that 60% of users use it primarily for work.

Did you know that 47% of Pinners start holiday-buying before Thanksgiving (versus 39% of regular shoppers)? Or that 38 million users have already saved 92 million holiday pins (including 3 million ugly Christmas sweaters)? Prep for the social shopping season with this holiday infographic, and get your strategy on (pin)point. 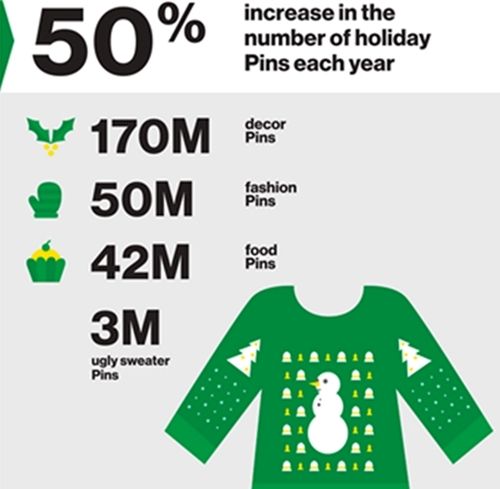 6. Storytelling in a post-ad era, with examples from Nescafé and Buzzfeed

AdBlock got you down? Turn that frown around; Jack Simpson's summed up a Dmexco 2015 talk about storytelling, rich with insights about how you can captivate users. Step one to being a great storyteller: Find the personal tone of voice that weds you to customers and sounds like your brand, without weirding them out.

Step two: Look at how other platforms let you tell stories differently. To wit: to evolve with Millennials, Nescafé consolidated its global portfolio of websites... and packed it all onto Tumblr, where it's focused on building "rented relationships" with young people and opening up to user-generated content.

And it doesn't have a ton of brand competition: In 2013, just 31 of the top 100 US brands were on Tumblr. Also, did you know that 21% of Buzzfeed's traffic comes from Snapchat? 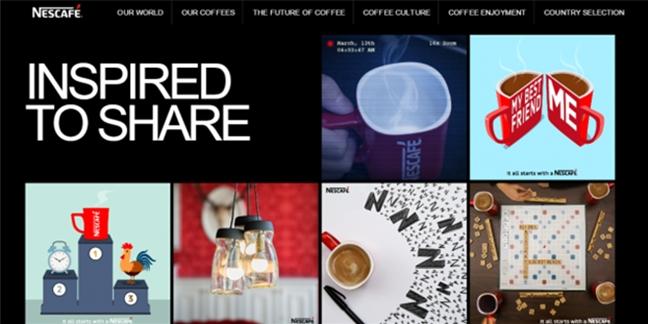 Get the blogger outreach you need by avoiding common brand don'ts—like asking them to submit work for your approval—and applying great do's... like reading their blog, and knowing how to make them feel valued, before getting in touch.

It doesn't take much to make an enemy out of a blogger, but it takes just a little kindness and consideration to transform them into ambassadors. Key to winning bloggers: Know that they value their freedom of speech! Tell them what your intentions are, then let them do their thing.

8. How are Facebook's Instant Articles doing?

Facebook's got 20 new partners, building on the nine that joined it for its iPhone app launch in May. Newbies include the Washington Post, which said "100 percent of its stories" will be Instant Article-formatted, as well as Business Insider, MTV, and more. Testing will expand to new users in the months to come. In the case of WaPo, it recently scored its first-ever Instant Articles advertiser: Qualcomm. The ad package includes Instant Articles impressions. 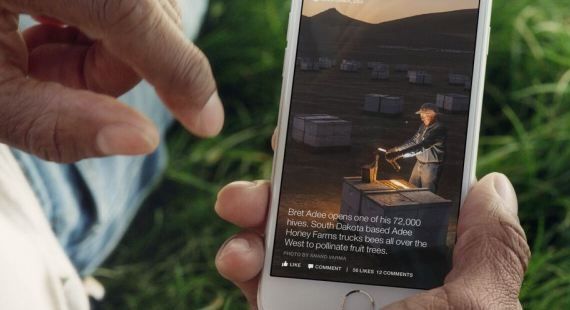 9. Hey, what happened to Snapchat ad-sharing?

For most brands it's been switched off, pending ongoing debates on how its Discover feature for media brands will actually work with the media. On other social platforms, meanwhile, such as Facebook, Twitter, Pinterest and Instagram, it's seen as a good thing when people share ads.

Ad-sharing will be switched back on once last-minute details are sorted; in the meantime, users who try sharing most ads will be met with a message saying the system doesn't allow it. The decision is especially odd, considering that Discover content is especially interactive (and, for some, more shareworthy than the average Sponsored Post on Facebook): Partners create games, puzzles and other participatory content. 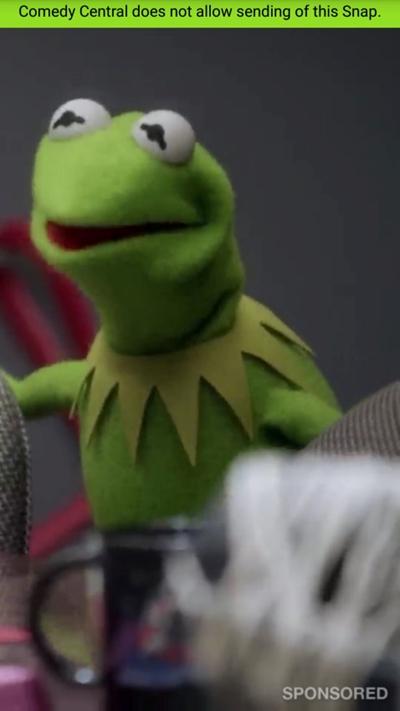 10. Coke: The first-ever brand to get a custom Twitter emoji

We're not kidding. When you use the hashtag #ShareACoke, it will appear with a pair of clinking Coke bottles. To get max use of its new emoji, Coca-Cola is working with Vine stars to get followers to tweet the hashtag in exchange for a follow or direct message.

Twitter also created custom Pope emoji for his US tour. There's a joke in here somewhere about Coca-Cola and the Pope sharing the same social status, at least emoji-wise, but... we'll let you make it.

Ready for some fun? Tweet #ShareaCoke to help set a new @RecordSetter record for the world's largest cheers. *clink!* pic.twitter.com/9UmY5WrVKE

11. How Instagram is pitching brands, and using it in email

To start, let's congratulate Insta on hitting the 400 million user mark, making it one-third as big as parent Facebook and marking 100 million new users in less than a year!

Next, Digiday did a great interview with Instagram's Amy Cole, who says 97% of ads get a significant lift in ad recall—three times the Nielsen average. She also said small businesses produce some of her favorite accounts, like woolandthegang, a "global knitwork": 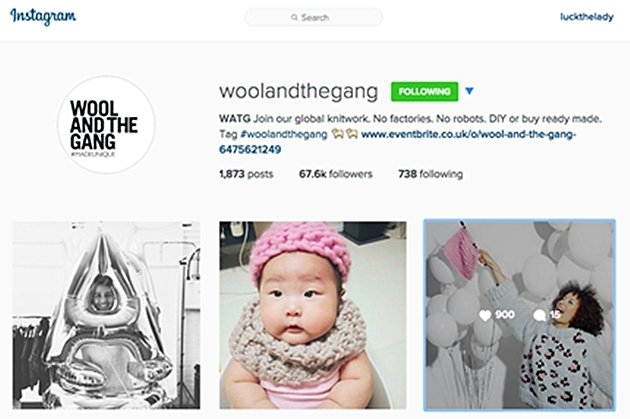 Cole reminds brands that whereas Facebook is about personal contact with users, Instagram is about visual inspiration: "You want to think about what mindset people are in when using the platforms," she said.

Now that you're raring with inspiration, find out how Instagram images can even improve your emails.

12. We'll wrap with something quirky

Social culture meets traditional media in this most unlikely news: If you're a fan of the New Yorker's caption contest, you know that there are very few captions that go with all of its cartoons (up until recently, there were only two widely acknowledged ones: "Christ, what an asshole" and "What a misunderstanding!").

Now there's a new one: "Hi, I'd like to add you to my professional network on LinkedIn."

Seriously. Try it. Your life in high-brow comics will never again be the same.