#SocialSkim: Go Shopping on Facebook, Plus 12 More Stories in This Week's Roundup

Get the latest on Facebook's new mobile shopping experiences. We'll also tell you about Instagram for Business, Pinterest's updated Place Pins, and how many marketers are really taking the influencer route. Skim to stay on top!

Building on its still-in-testing "Buy" button for News Feed ads, Facebook's created a "Shopping" tag on Pages that lets a selection of retailers list items, with a trial set for a limited number of users.

It's also updating its Canvas ads platform for mobile, which will also support buyable products (shown below): "After clicking on an ad, people will see a fast-loading, full-screen experience where they can browse through a variety of products, before going to the retailer's website to purchase," the 'Book says.

Tests like this tend to go live soon after, so watch for the chance to bring e-commerce to your page—and mobile ads—very soon. 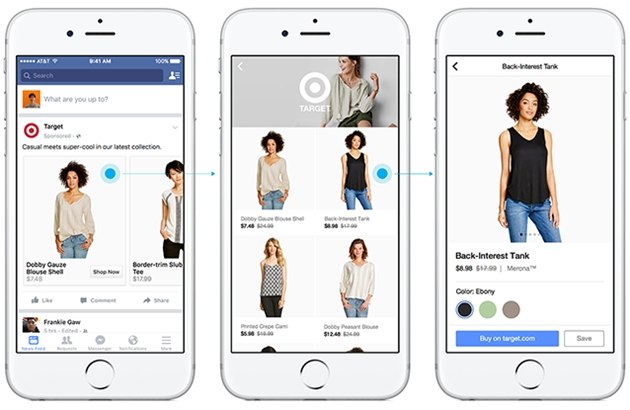 1. Not just Likes: Facebook's emoji reactions are rolling out

As promised, Facebook's started testing an entire array of new, Buzzfeed-esque ways people can react to a story, including subtle means of expressing dislike (animated "sad" or "angry" emojis).

Today we're launching a test of Reactions--a more expressive Like button. The Like button has been a part of Facebook for a long time. Billions of Likes are made every day, and Liking things is a simple way to express yourself.For many years though, people have asked us to add a "dislike" button. Not every moment is a good moment, and sometimes you just want a way to express empathy. These are important moments where you need the power to share more than ever, and a Like might not be the best way to express yourself. At a recent Townhall Q&A, I shared with our community that we've spent a lot of time thinking about the best way to give you better options for expressing yourself, while keeping the experience simple and respectful. Today we're starting to test this. Reactions gives you new ways to express love, awe, humor and sadness. It's not a dislike button, but it does give you the power to easily express sorrow and empathy--in addition to delight and warmth. You'll be able to express these reactions by long pressing or hovering over the Like button. We're starting to test Reactions in Ireland and Spain and will learn from this before we bring the experience to everyone. We hope you like this--or can better express how you're feeling!

For those who manage Pages, this will change the way you qualify reactions and engagement. Per The Next Web, new reactions data appears in the Insights panel and are reported the same way Likes are: You'll easily see whether they were made on the original posting or in a share.

Think of it as a way to demonstrate your content is worth more than a banal Like; a post that generates a lot of "yays," for example, is probably worth something different than one that scores plenty of "hahas." The new reactions are only available in Ireland in Spain, but expect to see them in your feed soon. 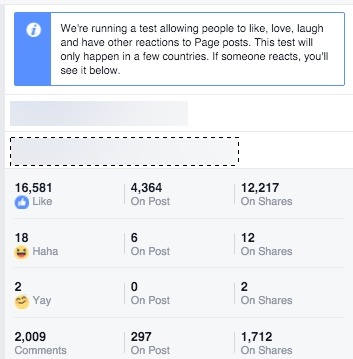 New video features, like suggested videos, the ability to save videos later or watch while multi-tasking, and the creation of a dedicated destination to see videos you've saved, as well as others you may have missed. That's currently testing on iPhones. It's also revised its On This Day feature to let you filter out dates—or people—you never want to be reminded of again. Consider this permission to officially forget that holiday office party. You know the one. 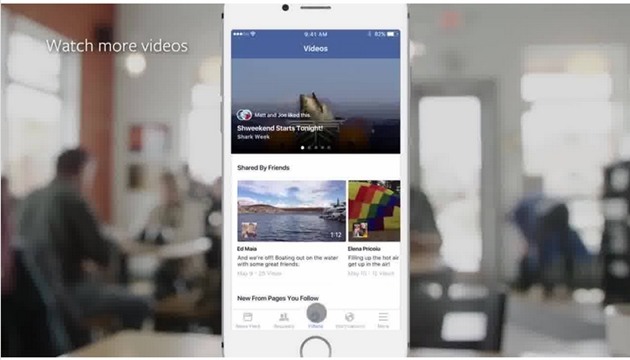 Instagram's launched @instagramforbusiness "as a source of inspiration for the business community." The account will run exclusive, behind-the-scenes stories that demonstrate how different businesses, large and small, use Instagram to achieve objectives. The first (and only) case study currently on the account is for Ben & Jerry's, but next week expect a small business contribution from Chicago's Flowers for Dreams, and an agency piece from BBDO New York.

The business community in all capacities—from major brands, to small businesses and creative agencies—has been an important part of Instagram since the beginning. Today, we're introducing the new @instagramforbusiness as a place to celebrate and inspire with unique stories from our business community. On this account, we'll highlight the work major brands, small business and creative agencies are doing on the platform. And share stories from all different kinds of businesses in all four corners of the world. To kick it off, we'd like to spotlight global brands—one of which pioneered the way for companies to share incredibly engaging content that's authentic to their brand. Every mouthwatering photo @benandjerrys shares embodies an aspect of their values—whether it's their commitment to the environment, their stance on social and economical issues, or the high quality ingredients that make their ice cream so good. Since joining in 2011, Global Digital Marketing Manager at Ben & Jerry's @mhayes says it's their community that makes Ben & Jerry's so successful on Instagram. "For us, it's all about our amazing fans and being able to connect with them and celebrate what we're made of. That's everything from our generous chunks and swirls, to our commitment to ethical sourcing. In addition, we try everyday to love our fans more then they love us."

4. The quantified state of social engagement

This article on social engagement is packed with stats, like how many Americans recommend a brand after a positive customer experience (69%), and by how much the number of social messages requiring a response from brands has risen (110% in the past year). There's also an index of social engagement rates by industry, brand messages versus brand replies, and a quick primer on how to out-social your competition. Dig in!

You don't need to be a film school graduate to take advantage of the video wave on social. These eight handy tips include useful—and easy—suggestions, such as shooting during the day (even great directors try taking advantage of natural light when they can). You'll also learn not to shoot with windows behind you, avoid shooting in cars, and remember that your hands are not as steady as tripods. Don't feel like reading an article? Watch the tips below—and if you're already a pro, find out how to use video metrics to create better lead generation data:

It's easier than ever to add data to Pins to help users find you: Location information will now be automatically added to Pins, which means that nearly seven billion of them will be updated to include phone numbers, addresses, and store hours.

More perks: Users can discover nearby places, or get a preview of where a physical location is on a map, which could include other Pins from that spot, or tips from people who've visited. A call to a business is just a tap away.

The features roll out on iPhone and iPad; Android and desktops get the update next. Once your Pins are souped-up with data, or even if they're not, study up on other ways to increase foot traffic with social.

Say hello to Scratchy, an iOS app that lets users "scratch" virtual scratch cards to win prizes from brands. Once they're downloaded, users must follow 10 brands from a list of big hitters, including Apple, Amazon, and Chipotle. They can then play scratch cards until they unearth three matching brand names under six possible squares. Even if they don't win, they still get a point; winners get bonus points; the higher they go, the more rewards they get. Think of it as Lotto for a digital generation, except nobody needs a coin with ridged edges. 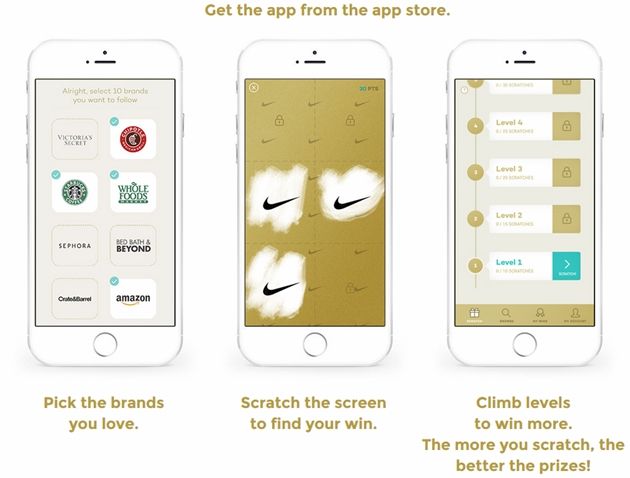 Snapchat's shutting it down and laying off its Snap Channel team. Part of Snapchat Discover, it was launched in January with several corporate participants, but it was put on hiatus weeks ago. Instead, Snapchat will use publishing partners to create original, ad-supported content, including ESPN, Comedy Central, Vice, and CNN.

9. How many marketers use influencer marketing, anyway?

The answer is 75%, per Augure, which also finds that 69% found an influencer engagement strategy effective. A full 93% of marketers who use influencer marketing strategies say they're improving visibility as a result. 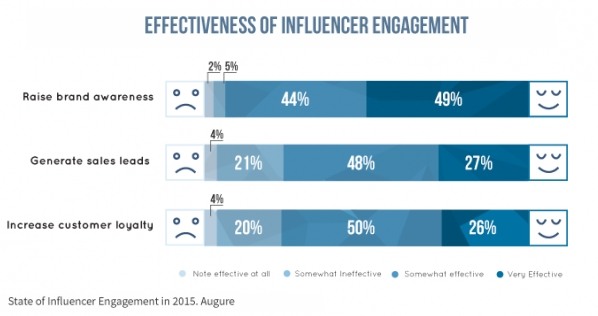 That's according to Pew, and the figure rose from 7% in 2005. Fully 90% of young adults—those age 18-29—use social, but use among those 65 years old and older is now 35%, compared with just 2% in 2005. Men and women are social at similar rates (62% and 68%, respectively). Those with higher levels of education and income are more likely to use social, but 56% of low-income households do, too. Trust us when we say there is so much more data here.

Before freaking out and shutting down your account, consider it's probably a good thing: Jack Dorsey, now permanent CEO of the company, is letting go 336 out of a staff of 4,100 worldwide—likely too many, as with most companies that have grown as fast as Twitter has.

The restructuring is part of a plan to "organize around the company's top product priorities," and is accompanied by a reasonably transparent letter from Dorsey. Cuts will consist mostly of engineering staff, and will, Dorsey hopes, make Twitter "smaller and nimbler." The money saved will be reinvested, he says, to drive growth elsewhere.

12. Let's wrap with some storytelling inspiration

We give you The Hero's Journey, a short video by Iskander Krayenbosch that outlines the different milestones a typical hero must achieve before arriving at a goal. (It also features illustrated cameos from Frodo, Batman, and more.) You'll find the 12-stage format in everything from films to ads, and it may help you construct a narrative out of the great story you doubtlessly have to tell. How do you put your customer in the hero's position?