#SocialSkim: How Facebook's Latest Algo Change Affects You, Plus 13 More Stories in This Week's Roundup

Get the latest on Facebook's latest algo update and open-to-all livestreaming, and find out whether you've got access to Instagram's multi-account support test. You'll also get a cool lesson from GaryVee on how Snapchat benefits B2B brands. That's just the beginning; skim to keep your whistle in tune.

Another week, another algorithm adjustment. This time, the Facebook formula that determines what posts appear on News Feeds changed to include qualitative feedback based on users' experiences, ultimately to serve more relevant posts and garner higher engagement.

What does that mean for you? The usual volatilities: The update should have no meaningful impact on reach or referral traffic for most; some may see referral traffic rise, and others may see decline, depending on whether the rate your stories are clicked on matches how often people report wanting to see them near the top of their feeds.

We've got you covered, though: Here's a refresher of the social network's page posting tips and best-practices. Review starts now!

And in other fun Facebook news, the social network revealed by how many degrees everyone is actually connected. The correct answer: 3.57. See where you stand, and consider it next time you want to book a star for your next video... 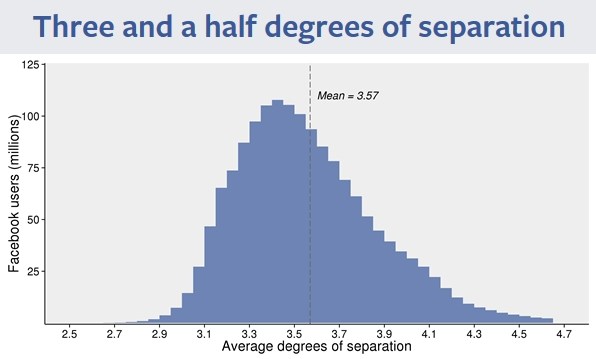 ...on a few iOS users (it was already available for some Androiders). This resolves a common community management gripe: To manage corporate accounts and a personal account, you currently have to manually log in and out of the app, whereas this feature lets you move smoothly from one to the next.

To check whether you have the feature, head to your Instagram profile and click on "Settings." Cross your fingers! Toward the bottom, there should be an option to "Add Account." (If it isn't there yet, it likely will be soon. We'll keep you in the loop.) 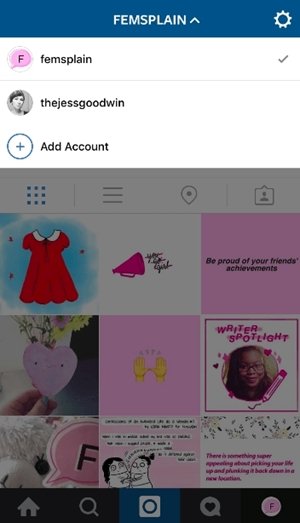 2. Facebook brings live video streaming to all US iPhone users

Previously only available for celebs and Verified accounts, the 'Book's expanded live video streaming to all iPhone users in the US. The biggest advantage: It's built on Facebook itself, so users don't need to download or open a separate app (like Periscope) to broadcast to friends.

Access it by tapping "Status" at the top of the homepage and selecting the live video option. As with Periscope, broadcasters can see the number of viewers watching, as well as incoming comments. Unlike Periscope, where old broadcasts expire after 24 hours, Facebook users can upload finished 'casts directly to their timeline, or save it in the Camera Roll. Ready, set, shoot. 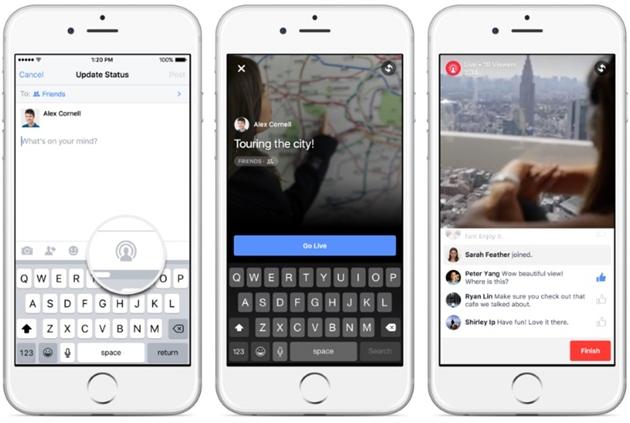 The world's second-largest search engine introduced 360-degree video—what it calls "virtual reality video"—in March to grab a foothold on what could be the next big format, and sources confirm it's now seeking support for immersive livestreamed video broadcasts.

The challenge lies in stitching together two different video feeds to create one spherical image... and doing that live is even more daunting, as people's cameras vary wildly. While some existing 360° cameras livestream content, the quality isn't all that great, so the journey could be a long one for YouTube. But once rolled out, it'll open new avenues of creativity and experiential production to marketers, who can't always justify the equipment investment necessary for live 360° content today.

It will launch its first-ever film series Monday, with cast and crew interacting with viewers in the comments section below each episode. Dubbed Shield 5, the series will air throughout the month across 28 15-second episodes.

The foray into social cinema follows efforts by platforms such as Snapchat, which have enjoyed mixed success. Hollywood is scrambling to address the threat from nontraditional distributors, such as Netflix and Amazon, and it seems the list of competitors is growing. Catch the first episode of Shield 5 below!

A recent patent application suggests Team Zuckerberg might add ridesharing capabilities to the world's social network of choice, simply by adding "Going and driving" and "Going but not driving" options for users to accompany the existing Going, Not Going, and Interested options on its event pages.

A patent doesn't ensure the feature will see the light of day, but after Facebook Messenger's integration with Uber in December, it could be a real possibility. For now, though, don't delete any ridesharing apps... and this may also be a good time to consider what other service additions Facebook can easily tack onto existing features. 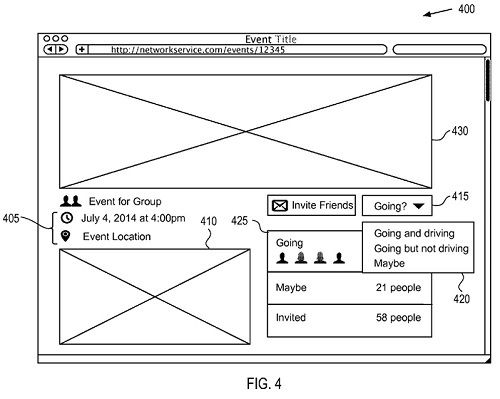 Facebook's WhatsApp hit a major milestone: It officially reaches one in seven people on Earth. The announcement comes a week after the messaging app took down its paywall, paving the way for more consumer-brand interactions. How might you partake? 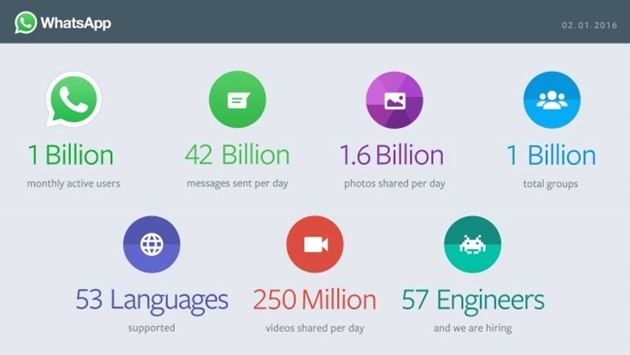 Until recently, the only thing users without accounts (outside the US and Japan) could see on Twitter's homepage was an invitation to join or sign in, with little explanation of the benefits or service itself. That's changed for 23 countries this week: It's rolled out an updated homepage featuring tweets from around the world, making it easier for Twitter prospects to see what they're missing (and quickly follow people of interest).

The change may be sparked by Twitter's inability to grow its user base, which is wreaking havoc on its stock price; we'll see whether this addition yields the uptick it so desperately needs.

8. A company that didn't exist six months ago is now more valuable than Apple...

And it starts with an "A". With stock prices pushed northward by increasing mobile ad sales, Alphabet—formerly known as Google—surged past the iPhone creator in value amid strong quarterly earnings and a new, transparent discipline on costs. Apple had held the top spot since dethroning Microsoft in 2010, but it's struggling against softening iPhone demand, especially in China, and the lack of a hit product in its pipeline.

9. Why Snapchat will be great for B2B

"Behind every B is a C." That's the message from Vayner Media CEO Gary Vaynerchuk, who reminds us that humans are behind every decision made in a B2B context. That fact, paired with the inevitable aging of Snapchat's demographic (which will soon hit the 35-50 mark), will provide the spark needed to make the platform more useful for B2B-ers.

Pointing to YouTube's transformation from a simple entertainment destination to the world's second-largest search engine, GaryVee suggests that B2B companies that behave like media entities by creating stories that bring value to end users can use Snapchat to capture a niche audience.

LinkedIn and Facebook may still be the best bet, but prepare for the shift by reviewing this 'Skim packed with cost-effective Snapchat strategies.

10. The case for using emojis to boost engagement

Don't depend solely on words to bring your message to your community. As digital media goes increasingly visual, emojis provide a unique way to communicate tone and sentiment. A WordStream study says tweets with emojis not only receive 25.4% higher engagement than those without but also have a lower cost per engagement.

But before going emoji-crazy, ensure your community manager reads these guidelines for using them effectively, including being fluent in emojis' unique "language" and using them in relevant ways for customers. 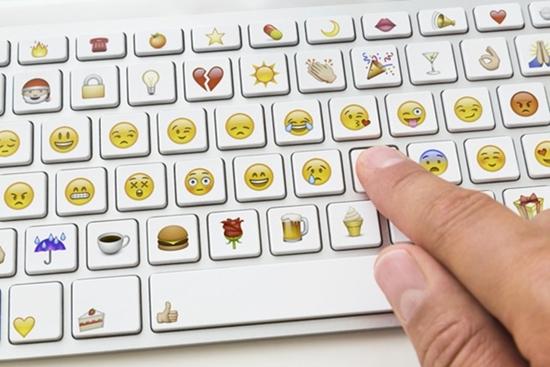 Just invested in a customer relationship management (CRM) software but don't know where to start? Step one: Segment your customer base. Here are four bite-sized tips for doing that to better address users... and your bottom line. Covered: Segmentation by job level, function, company size, and industry.

There may not be a magic formula for calculating hard ROI on social media, but as companies invest more in managing social, establishing metrics that make sense for business—and provide actionable insights—is a necessity. Below: A short summary of metrics worth considering to help quantify the impact of a social strategy. Click to access all the tips!

13. We'll wrap with a fine distinction: What's the difference between joining a trend and claiming it's yours?

Some videos, memes, and cultural trends become so ubiquitous that everybody, including brands, races to get in on the action for an engagement bump. But a major fallout between a popular YouTube network and its fanbase highlighted how damaging it is for a brand to start believing it owns the trend it copied.

Fine Brothers Entertainment, which boasts nearly 14 million subscribers, launched "Kids React" in 2010, a series where the duo shows kids viral clips and films their reactions. The hilarious format spread quickly, with fans worldwide uploading video reactions of themselves, friends, or family in other contexts. Sensing the opportunity, The Fine Brothers registered a trademark in July 2015 for the "React" genre to capitalize on the format's popularity through licensing.

But so-called " reaction videos" predate their efforts. So subscribers, worried about the network's attempt to monopolize the genre are threatening to abandon them in droves. The trademark application was ultimately pulled after a huge subscriber drop and social backlash.

For brands toying with UGC or benefiting from social trends, be wary of laying claim to something that belongs to a community. This is an easier rule to follow when a trend predates you; but even if you invented it, and the work has proliferated, sometimes it's kinder (and safer) to let sleeping dogs lie and consider its popularity a compliment. (Handy example: How much more boring would our feeds be if all those hilarious copies of Old Spice's "The Man Your Man Could Smell Like" ad vanished? Instead of punishing the audience, Old Spice built on their enthusiasm with even better stuff, and it's beloved today.)