Social networks spent the week honing their core products and beefing up their ad prowess, with Instagram officially introducing its long-rumored business features, and Twitter opting to scrap its buy buttons in what might (or might not) be a big blow to social commerce.

We'll also cover Snapchat's plans to revamp its Discover feature, discuss how social has officially become the go-to source for news for millions, and give you the scoop on the social and tech world's plan to help governments tackle terrorist propaganda and hate speech. Skim to stay sharp!

The social network that started with small, square pictures brought big news this week with the introduction of new business-centric features.

Brands with Facebook pages will be able to convert their existing Instagram pages to new business profiles on the platform, which bring in-depth analytics capabilities to help brands see which posts are performing well, and simple, one-tap solutions for followers to contact and find directions to the company.

The social platform also introduced mobile ad creation, which allows users to promote well-performing posts by quickly turning them into ads. Although the ads are less feature-rich than the ones Facebook's desktop tools, such as Power Editor, can provide, the mobile creation tool is designed for simplicity and speed, and Instagram can even offer users suggestions based on budget and audience.

Business profiles will roll out in the coming months in the US and reach the rest of the world by the end of the year.

1. Twitter drops its buy button, but that doesn't spell the end for social commerce

Ever find yourself heading to Twitter to shop? It turns out you're not alone if you said no, with the Future of Retail Study finding that only 6% of consumers were likely to make a purchase on the platform.

Case in point: Twitter decided to abandon its e-commerce ambitions this week by dropping its integrated buy buttons, opting to instead focus on its core product—live interactions.

But the news doesn't mark the demise of social commerce: 32% of all consumers say they're likely to make a purchase on social, and significantly more (87%) of Pinterest users say they have purchased something because of the social network.

Analysts are by no means in agreement with whether social shopping will succeed, but with mobile orders now outpacing desktop orders, we're certain social networks and brands will continue trying.

The media and messaging app is redesigning its Discover section to let its publishing partners (think Buzzfeed, MTV, and ESPN) display content that draws in viewers instead of the static, circular logos that currently represent the channels.

The facelift will allow publishers to create cover images that give a glimpse of the content inside, making the section appear more magazine-like.

The goal behind the revamp is to drive more Snapchatters to Discover, the section few of the platform's 100 million users make it to, which also happens to be where most of the ads run. A formal announcement is expected next week.

Facebook is the latest among tech giants adding an extra layer of security to their users' communications following Apple's standoff with the FBI. The Guardian reports that the social network will release an optional encryption mode for Messenger users in the coming months.

Why optional end-to-end encryption you ask? Apparently, deploying the feature as standard would interfere with certain machine-learning features the company is working on (AKA chatbots and the like). It seems the battle lines between tech companies and the government have been largely established.

The livestreaming app is rolling out a community-policed, real-time comment moderation experiment that allows users to report and moderate comments as soon as they appear on a stream.

The function relies on a voting system of sorts, with flagged comments disappearing immediately from the whistleblowers' screens, but then being fed to a few random Periscope users for voting whether the comment is truly spam or abuse. If most users agree, the commenter's ability to chat on the livestream is temporarily disabled.

It seems that Periscope owner Twitter, which has struggled with abuse issues, could learn a thing or two. 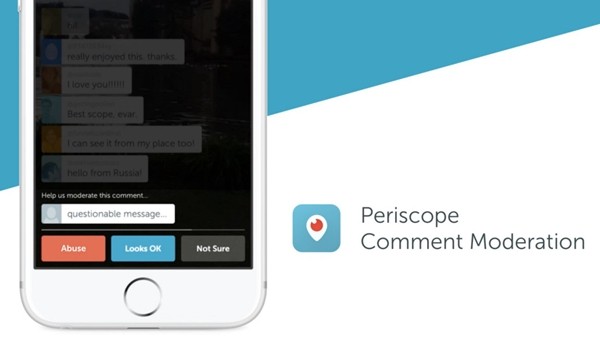 Facebook announced the expansion of its ad network and now gives marketers the ability to show ads to all visitors of websites in the social network's Audience Network, not just to those who use Facebook.

The new partnership means Twitter users can listen to 30-second previews of Spotify tracks in their timelines and in Twitter Moments, and can now even dock the music player in the corner of the social site to continue scrolling their feeds with some background music.

The integration follows Twitter's April inclusion of SoundCloud, and also serves as a way for Spotify to increase the value of its paid subscription as it continues its battle with Apple Music.

You'll want the volume up for this #SummertimeSoundtrack. Tweets with @Spotify tracks now play in your timeline! ??https://t.co/93avzwiQbs

In a first for mankind, Mark Zuckerberg took to Facebook Live to speak with three astronauts on the International Space Station on Wednesday, with discussion ranging from the experiments the crew are currently working on to what they do for fun. Oh, and it ended with the astronauts amazing us with some zero-gravity acrobatics.

The social network's usual goal is described as connecting everyone in the world, but apparently it's got its sights set on new horizons.

Mark Zuckerberg - Live Q&A with astronauts on the... | Facebook

8. It's official: We now get most of our news from social media

A new study from Pew Research Center reveals that social continues to play an increasing role in news consumption, with 62% of all Americans now getting their news from social media platforms.

Surprisingly, Reddit takes the top spot with 70% of its users heading to the site for news. Facebook, which boasts a much larger user base, comes in at number two with 66%, up from 47% in 2013. Twitter places third with 59%, and Snapchat is fourth with 17% of its users getting informed via the ephemeral app.

It's not all bad news for traditional media, though, because 39% of news-going Facebook users still watch local news, and 15% of them still read traditional newspapers. 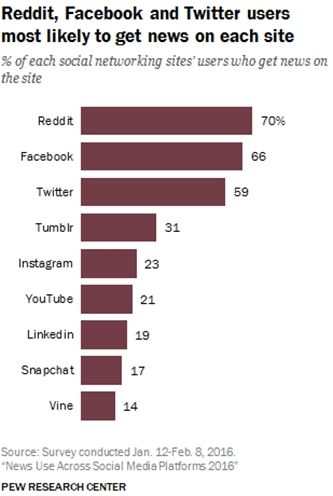 The 2016 Social Media Marketing Industry Report is out, and it gives us an indication of where B2B and B2C marketers are focusing in 2016, from the platforms they value most to the content types they're betting on. Sink your teeth into MarketingProfs' recap for more! 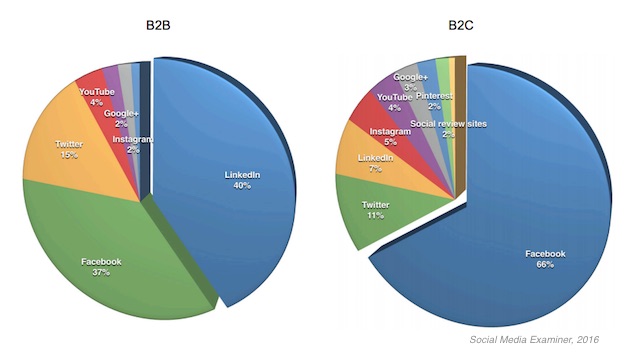 Facebook, YouTube, Twitter, and Microsoft this week pledged their support to the European Commission's new code of conduct designed to crack down on threats and hate speech.

The guidelines push the online giants to remove content or disable profiles associated with threatening or abusive messages in Europe within 24 hours of being notified.

The recent terror attacks in Brussels and Paris, as well as the refugee crisis, have prompted EU governments to combat terrorist propaganda, profiles dedicated to radicalizing youth, and racist or xenophobic content.

11. A recap of the latest Instagram changes, and what marketers need to know

Whether you feel like a pro at all of Instagram's new features because you've kept up with the 'Skim, or whether you could use a refresher, we've got Social Media Examiner's a guide to all of the platform's latest changes to help you stay on top of your social marketing game.

Covered in detail: Insta's video length increase and new view count metrics, the ability to reveal calls to action on profiles and when users tap on your photo ads, and a refresher on the social network's algorithm and how it changes your News Feed.

12. We'll wrap with the ad spreading on social like wildfire

And it might take the trophy for most blatantly racist ad of the year. Qiaobi, a Chinese laundry detergent brand, thought it was a good idea to have an Asian woman stuff a black man into a washing machine so that he'd emerge as a fair-skinned Asian guy.

The ad was originally posted on Chinese social media in March, but resurfaced and made headlines this week as a result of its universally denounced content. It just goes to show that social can bring anything back from the dead.

The company responded with a statement that apologized for the "harm caused to African people because of the spread of the ad and the over-amplification by the media." That doesn't really sound like an apology, does it?

Check out the ad for yourself, and we'll see you all next week!