#SocialSkim: Facebook Takes on Adblockers, Plus 11 More Stories This Week

This week's all about expanding access, from both consumer and brand perspectives. Facebook flipped a switch that lets the social network evade ad blocking technology, but it also gave consumers new powers to control the ads they receive and the companies they're targeted by.

We'll fill you in on Twitter's new vision for Twitter Moments, give you the latest on Snapchat's freshly inked deal that will bring big TV show content to the platform, and set you up with a way to track multiple social accounts—and their analytics—on a single, insight-rich dashboard.

Skim to stay ahead of the rest!

Zuckerberg has a new trick up his sleeve. Facebook has a launched a new feature that it says thwarts ad-blockers' ability to tell whether a post is sponsored or unsponsored, meaning the hundreds of millions of people currently using ad-blocking technology might be out of luck if trying to bypass ads on the platform.

However, Facebook is also introducing new ad preferences that put consumers much more in control, allowing them to opt out of targeted ads from certain brands, as well as see which brands have their contact information on file.

Although this might appear as bad news for brands, it could be beneficial, with marketers no longer wasting ad spend on users who have no interest in their products or services. Times are a ch-ch-changing! 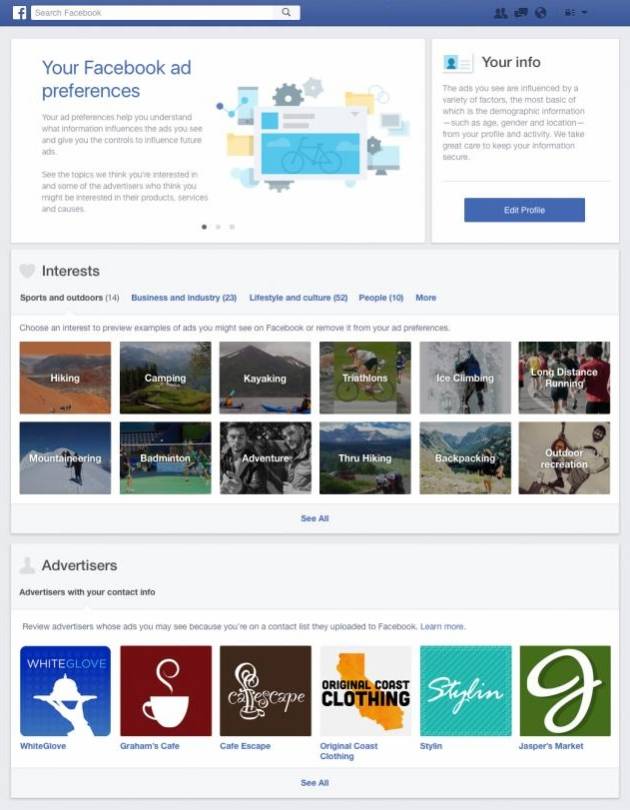 Twitter has officially opened up Moments, the social network's curated tweet slideshow that focuses on particular topics and trends, to brands and influencers. The feature was previously only available to in-house curators and news publishing partners, which means the expansion should spawn more user-generated Moments that will be promoted within more users' personal networks.

Moments brings Twitter wider, more diverse coverage of news events and random culture that could help the social network prove its depth to the market and onboard more users to push those depressed growth numbers up. Twitter has confirmed that the ability to create Moments will reach all users in the coming months. 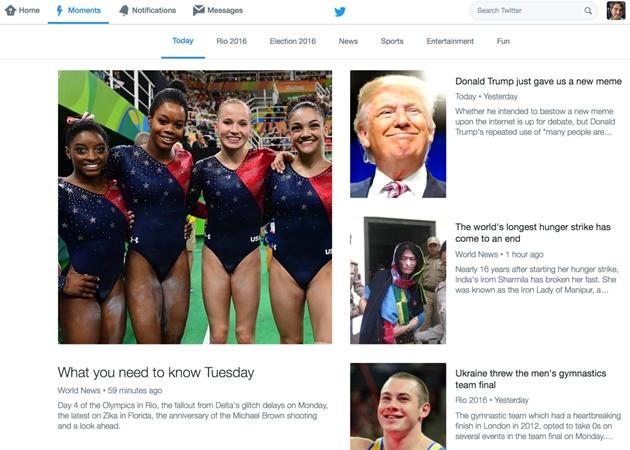 Bad news for those who depend on clickbait-y headlines on the social network to drive referral traffic to their websites. Facebook manually classified tens of thousands of headlines based on a "clickbaitness" score, and Pages with high scores will have all their posts and referral links pushed down in priority and visibility.

The anti-clickbait efforts could result in more legitimate publishers' getting an uptick in referral traffic, and hopefully improve the user experience, since the pesky headlines are one of most criticized fixtures on Facebook News Feeds.

A new, multi-year content and advertising deal between the social network and the media giant will be a big step for both in an expanded partnership: NBCUniversal is bringing original content from its hit series, such as "The Voice," "The Rundown," and "The Tonight Show Starring Jimmy Fallon" to Snapchat's audience.

This reimagining of its TV franchises (these won't be summary clips of things that already aired on TV; they'll be original content) also means the first-ever reality competition on Snapchat, with "The Voice" set to have the shows' star judges review user-submitted videos to give one lucky winner the chance to appear on the show's new season.

Additional programming from the network is expected from across NBCUniversal's portfolio of entertainment, news, sports, and Hispanic properties.

So, now that Instagram is part Snapchat, just how exactly does the platform organize and order users' Stories? And is there a way to boost your brand's chances of appearing first in the horizontal Stories feed?

It turns out the social network orders Stories by referencing data from parent company Facebook—and it decides on placement based on whose content people engage with on both Instagram and Facebook.

That marks a stark departure from now direct competitor Snapchat: Its reverse chronological feed ignores algorithms and thus lets brand content move to the front based on time published. Instagram Stories don't give brands that option, and make them earn their way to the front by producing content users want to engage with.

It appears Facebook is finally ready to give MSQRD, the Snapchat-like filter and lens app it acquired last year, a place in the front row. Drawing on users' excitement for the Olympics, the social network introduced the tool dead-center at the top of select users' News Feeds to enable them to share photos and videos of themselves with special, Olympics-themed filters and overlays.

It's the first time the social giant has incorporated MSQRD capabilities directly in its own application, and the capability could roll out globally should its test users in Canada and Brazil take to the feature.

6. Instagram testing a "save draft" feature to the cheers of digital marketers worldwide

In an apparent worldwide test of a "save draft" option, Instagram has been giving a glimmer of hope for those whose masterpieces on the social network take more than a few seconds to compose, or those who want to save several options for publication.

That hope is in the form of a "save draft" button that, instead of leaving us high and dry by discarding edits when we hit the back button, prompts us to save a copy for future use.

Unfortunately, the functionality is only a test; but with all of the joyous reactions on social, it's hard to imagine that the platform won't incorporate it in the future. Our hopes are high.

The company's full-fledged blitz into video apparently knows no bounds, and Facebook is now testing the ability for users to stream video from their Facebook app right to their televisions via Apple's AirPlay, Apple TV, or Google Chromecast.

The feature could be especially interesting for Facebook Live streams, as it would allow users to watch live streams on the big screen while using their mobile device to add their comments and reactions during the broadcasts—a true social TV experience.

This could also be a move that brings Facebook into the living room—and up against competitors like Netflix and Hulu! 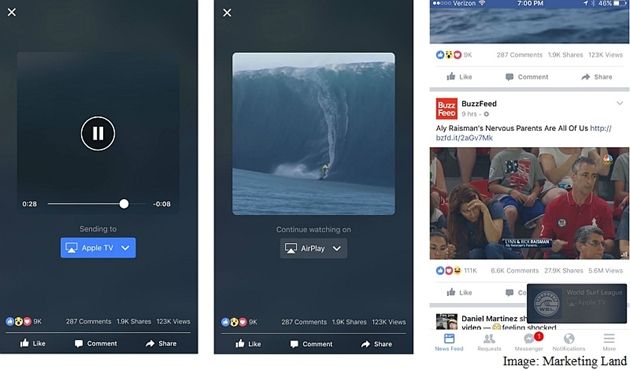 The location-based check-in app was once thrown around in the same sentences as Facebook and Twitter, but it's declining user base in many markets, and a somewhat botched rebranding effort, led the company down the path of reinvention.

Now, set with mounds of location data, Foursquare positions itself as an enterprise business for consumer data and attribution.

The app's database of 105 million places and 85 million commercial venues around the world helps marketers figure out who frequents what venues for better targeting, and lets retailers see whether their online advertising drives traffic in-store. The only problem is, outside of the US, Turkey, and Brazil, the app's users base is stable or declining, so that much-prized data could soon dry out.

9. All aboard the social app redundancy train

If imitation really is the sincerest form of flattery, Snapchat should be reeling from compliments. The ongoing replication game played by the social giants, and highlighted this week with Facebook's integration of Snapchat-esque Olympic filters and Instagram's direct clone of Snapchat Stories, appears to just be heating up.

But Facebook isn't the only player in the game: Snapchat's introduction of Memories last month emulates Facebook's Moments in that it gives the popular ephemeral messaging app more of a Facebook-like permanency.

It appears the social space is starting to close in on itself. That may complicate things for us digital marketers at times, but in the end we get good products because one company refines something another has already started. We'll take it over the stagnant, unengaging alternative.

10. How to monitor multiple social metrics in one dashboard

Too many metrics and social media profiles to keep tabs on? Setting up a custom dashboard so your team can easily peek at an overview of the performance of multiple platforms can make your lives a lot easier.

From choosing the right dashboard, to linking all your social (and email) metrics to said dashboard, The Social Media Examiner has you covered with a step-by-step guide to optimize your time, and ultimately your social strategy.

Friday night a week ago marked the start of the 2016 Olympic Games, and fans around the world took to social to express their support and social savviness during the Opening Ceremony.

The countries with the highest percentage of monthly active users to interact on the platforms were Brazil (13%), Argentina and Mexico (7%), the US (6%), and Peru (5%).

However, since the start of the games, much of the social conversation has been around The Philippines' diving team, which suffered in scores but succeeded on social with a series of... underwhelming dives that led to their not qualifying.