The social network officially announced the global launch of its enterprise social network—formerly known as Facebook at Work—at an event in London on Monday. The long-awaited and long-tested product is dubbed Workplace and offers a unique mix of Facebook's News Feed, groups, Facebook Live, messaging, search, and trends for company networks that remain separate from users' personal profiles.

Free for educational and nonprofit organizations, and with a cost-per-user pricing structure for others, it could be a smooth transition into enterprise software for your brand.

To fight back against Instagram Stories, which quickly reached 100 million daily users after its introduction, Snapchat brought a suite of updates to put users' friends first.

The social network not only placed friends' Stories back up above its Discover section on the app but also replaced auto-advance Stories with what it calls the Story Playlist, which gives users the opportunity to select the Stories they wish to watch consecutively.

However, now that users can decide to watch a single Story at a time, or a Playlist of hand-picked ones, Snapchat also offers a new, post-roll ad-type to make sure the company can still stick ads at the end of a single Story should users opt to view just one.

Unlike Messenger, users won't be obliged to download the new Events app because a dedicated events section will remain in the social network's flagship app, but the launch gives the 100 million people who consult events on Facebook everyday a new way to explore, organize, and plan with ease.

Facebook Events, launched on iOS last Friday, compiles users' existing RSVPs, and provides a feed of what the social titan thinks would interest users, based on their friends' activity, their location, interests, Pages liked, and more.

The standalone app serves a reminder not only that 650 million people use Facebook Events in general but also that your brand might very well consider it in the future for event planning, if it hasn't already.

4. How to get social for American Express's Small Business Saturday

Ever feel let down on social because your small business can't afford to spend thousands on boosted posts? If you're not familiar with Small Business Saturday, here's the lowdown: Launched by American Express, it's a yearly event created to ignite awareness, show appreciation for, and stimulate commerce for US small businesses, from both a B2B and B2C perspective.

This year's Small Business Saturday falls on November 26, and even the smallest businesses have an arsenal of traditional and digital/social marketing assets courtesy of American Express to join the nationwide event.

Check out how Small Business Saturday, mixed with effective social media marketing, could give your company a boost!

After its costly failure in India where regulators shut down the project because of fears it would disadvantage businesses that didn't have the money or notoriety to be included in the social network's free offering, rumors are swirling that Facebook is set to introduce a similar app to low-income and rural American communities.

The Free Basics app gives users free Internet access for resources like job boards, news, and health information, thanks to deals with wireless carriers that would allow the users to "stretch" their existing data plans. The service could provide new ways for businesses to reach currently unreachable customers, but also make Facebook those businesses' only recourse for doing so. 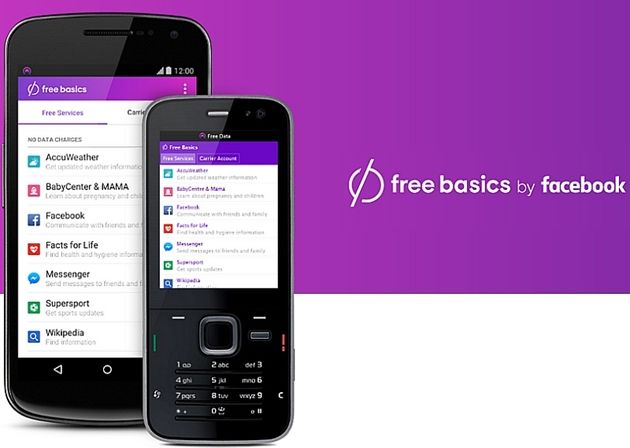 The parent company of Snapchat is eyeing March for a public debut, and it's envisioning an initial public offering that could value the company at $25 billion... or more. It's quite a feat for a social network that, fewer than two years ago, was sometimes treated as little more than a sexting app by major media.

To put such an IPO in perspective, it would be the largest since Chinese e-commerce giant Alibaba went public in 2014. Snapchat's integration of advertising and sponsored content has helped its valuation grow, and the app is set to hit 66.6 million users in the United States alone by 2017!

Turning connections into leads on LinkedIn can prove a challenge, particularly for those B2B companies just starting out on the platform. Luckily, with the right guidebook and nifty hints, anyone can generate qualified leads through five thoughtful steps. Covered in detail: building your network strategically, shifting the focus away from yourself, sharing your secrets to build trust, staying top of mind, and making the ask.

8. What social platforms your brand should learn first

Different social media reach different demographics, and different types of content achieve varying levels of engagement depending on where they're posted. So, where does a B2B brand focus if just starting off? Embark on a social strategy that fits your brand goals, and provides the benefits and ROIs your company seeks.

LinkedIn is arguably the best platform for B2B leads, but Twitter, positioned more so now as a source of news, is also used with equal measure to raise brand awareness and share information.

While Tumblr is often left out of mainstream social media conversations, recent research from Pew shows that 10% of Internet users frequent it, so it might also be worth looking into a strategy for your brand if your business strengths are best represented by vibrant images and blog posts.

Check out the full insights for a solid start to social. 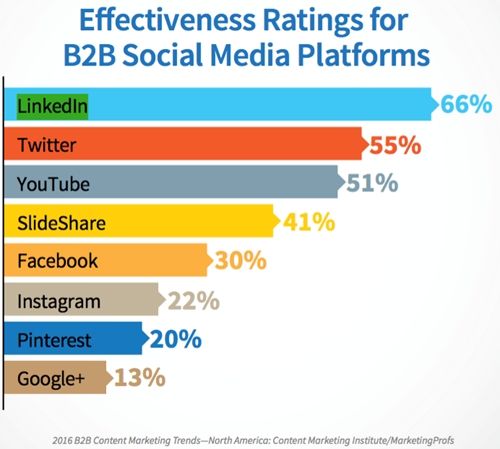 Snapchat and Twitter are headed in opposite directions, with the former being the darling of investors ahead of its high-value IPO, and the latter losing steam after bids for takeovers as monetization of the platform has faltered.

Twitter's been generating revenue far longer than Snapchat, so what are some reasons for the divergence? For one, Snapchat is poised to reach similar revenue levels of Twitter by 2018, and its user growth is projected to grow significantly faster than Twitter's.

Snapchat also boasts a higher average user time spent on the platform, and plays host the elusive Millennial audience brands so desperately seek. If your brand has been holding out on creating that Snapchat account, you may want to reconsider; it could very well be the future. 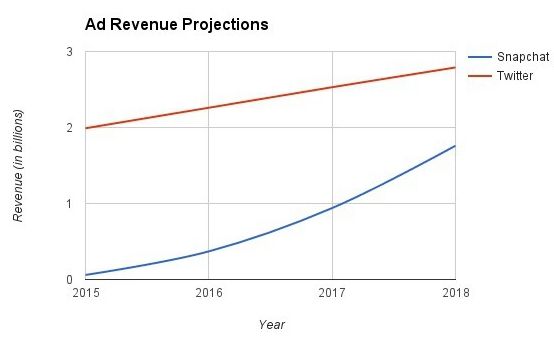 Most of us might not be clear on the concept of dark social, but Adidas tried to tackle it head-on in an effort to build hyper-local communities that stretch beyond your typical brand ambassador by offering unique access to events, people, and experiences. But the brand is running into trouble for the same reasons that make dark social, well, dark.

Dark social refers to the tracking of communications that are shared privately on platforms like WhatsApp and other social networks, with little or no analytics readily available. Adidas used WhatsApp to slyly build groups of super brand ambassadors across the globe by providing them with access to cool things like a group conversation with one of their sponsored athletes. The goal was to encourage and harness the power of private recommendations to build relationships in a way that will serve the brand down the road.

But measuring engagement is proving more difficult than thought for the brand, and the senior director of global communications has some insights to share with brands considering dark social in their approach.

What do you think of the technique? Will infiltrating dark social lose its edge as messaging apps become filled with brand-built chatbots?