Skim for all kinds of tools and insights!

Businesses on Facebook might soon have an alternative to LinkedIn for recruitment, with the social network testing the ability for business page administrators to post and accept applications from potential candidates.

Facebook confirmed that the test gives Pages the opportunity to share job openings via a status update and provides users the ability to click an Apply Now button to submit their applications, with businesses receiving completed applications in the form of a Facebook message.

Facebook's enormous reach and vast collection of detailed personal data renders the social network a worthy adversary for LinkedIn should it pursue the matter further. This might also be a hint of big things to come in the future, including a change in the social media landscape for B2B marketing. 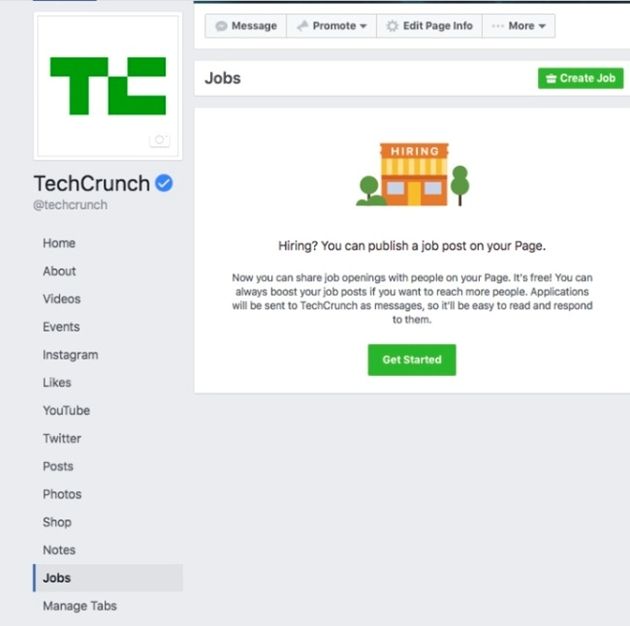 The social behemoth is moving toward eating away at part of your TV advertising budget, with recently released plans to sell ads to appear on Apple TVs and Rokus on television screens across the country.

Facebook hopes its new partnership with networks A+E and Tubi TV, allowing the social network to deliver ads to viewers of their apps on those set-top boxes, will pave the path to a new revenue stream from actual TV screens.

Although Facebook says this is just the beginning of a test, and that it has yet to establish ad formats or lengths, we can surely bet that it's a sign of things to come if tests go well.

It turns out announcing the closure of its short form video app Vine may have just been a bid to get... bids. Twitter is reportedly vetting many offers, especially from Asia, to purchase the platform.

There's no official word on which companies this includes, but rumors include the Japanese maker of LINE—a hugely popular messaging and gaming company. Twitter announced the closure of Vine on October 27 and hasn't spoken about it since, leading some to believe that it's more than entertaining the idea of selling it rather than bidding adieu for good; that could be great news for those of you who worked it successfully into your social strategies.

4. Facebook takes on the gaming world with "Instant Games"

The company's Messenger app is preparing to launch an "Instant Games" capability that will let users challenge their Facebook friends to lightweight games on the messaging platform, and who better than the makers of Candy Crush to join in on the fun first with their new game, Shuffle Cats?

Messenger is testing the new game in New Zealand, and other gaming developers already have projects in the works.

Facebook's once highly popular gaming platform launched in 2009 but fizzled out as the world moved mobile, and Apple's iOS and Google's Android app stores filled the void left by Facebook's desktop platform. But this resurgence by the social network, and the ability for gaming developers to build in HTML5, means distribution on messaging platforms like Messenger is becoming reality. And now there's a race between Facebook, Kik, and others to gain the first-mover advantage. 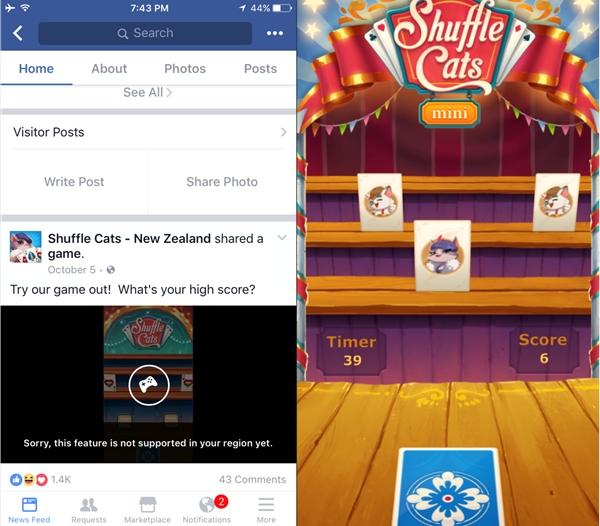 5. WhatsApp tests its own version of Snapchat Stories

What's to stop Facebook from taking a stab at Snapchat via all of its owned platforms? Not a thing, and it appears the social giant is doing just that: WhatsApp is testing a Snapchat Stories competitor called "Status."

The new feature, available now in both iOS and Android public beta version of the app, allows users to share multiple updates in one day, including photos and videos with text and doodles overlaid as desired.

Although Status currently functions only on jailbroken iPhones and rooted Android phones, it's a hint that Facebook's willing to test just about any way to take the wind out of Snapchat's sails. Would you use WhatsApp like you do Snapchat?

6. One billion people now check Facebook only on mobile

The new milestone comes as the social network announced to investors that 84% of its advertising revenue now comes from mobile devices, and that it had 56% year-over-year revenue growth—a figure that allowed it to hit $7 billion in just one quarter for the first time ever. The milestone also means those one billion monthly active users accessed the social network only via a mobile device.

Although the report was upbeat for investors, there's still worry that Facebook's newest projects—Oculus Rift, its continued work on purchased messaging app WhatsApp, and its fleet of drones that provide Internet access to rural areas—could take years to generate revenue as the social networking company expands its ecosystem. But the company's positive mobile figures provide comfort in a world that's becoming increasingly wireless and mobile-driven.

Periscope is joining the Snapchat era and taking a swipe at the app's popular augmented reality mask feature that lets users transform into different characters on-screen. The Twitter-owned livestreaming app created its own animated selfie masks that let users get in character—as Hillary Clinton or Donald Trump.

Live broadcasters using the latest iOS version of Periscope saw the mask option docked at the bottom of their screens, and could activate them with a click of a button.

Masks could be a key in promoting more users to go live on the Periscope app, as shyness is often a primary factor that discourages users from creating live content themselves on the platform, as opposed to simply viewing others'.

Facebook might be eyeing LinkedIn with its new job posting feature, but the two are still tied in effectiveness for B2B marketers: Both come in with 58% of the votes according to a recent study from Regalix.

Twitter and YouTube jumped in at second and third with 39% and 14%, respectively, each far ahead of Google+ and Pinterest. The surprise in the survey is that Facebook ties with LinkedIn, which typically ranks highest among B2B marketers. (Keep in mind, though, that "effectiveness" in this case specifically means "delivers on ad spending.")

Which do you prefer for your B2B efforts: Facebook or LinkedIn? 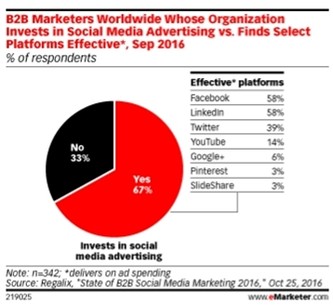 Knowing what metrics to analyze when measuring your social media marketing ROI depends largely on your business goals, but many small and large businesses take an insufficient approach by looking only at the number of fans or likes to determine their success.

The beauty of social media is that it provides real time data that often don't exist on different mediums, such as television, but the numbers that a brand wants to keep tabs on change depending on whether its goal is to simply increase reach, establish itself as an expert, generate click throughs to its website, or something else.

Business2Communiy has a handy read on which numbers to look for based on your goals, and how you can find them. Happy skimming!

10. What are the signs of a weak social media campaign?

Marketers are sometimes pressured to get something out onto social media for the sake of simply having a presence, leaving many social campaigns ill equipped to produce tangible results and actionable insights.

To get your best shot at generating a trackable ROI with your campaign, no matter the platform, there are some specific pitfalls to avoid, and AdWeek's Social Times gets down to it with five signs to look out for as evidence that your campaign isn't up to snuff.

Covered in detail: how poor targeting, an inefficient tracking system, a bad landing page, weak ad copy, and a lack of quality images can doom your campaign to subpar performance and a lukewarm reception.

Head over to MarketingProfs to discover eight tactics to follow—or avoid—to boost your content marketing effectiveness. From recognizing consumer pain points and giving up on establishing yourself as a "thought leader", to personalizing B2B content and providing content in the right formats, use these insights to set your brand apart from the crowd.

Has your B2B brand found success in telling its story visually on Instagram? If so, various tools are available to help you optimize performance, track analytics, schedule posts, craft content plans, and keep tabs on the competition.

Social Media Examiner provides a detailed list of such tools to show how to do all the above; it also has insights on how to maximize the usefulness of each one. So, what are you waiting for? Go get started!

13. We'll wrap with an analysis of whether social media can call an election

In an election in which the winning candidate essentially ran his campaign on Twitter by heavy-handing rivals to respond to his 140-character tirades, whether social media can predict the outcome of a presidential election is a valid question, and Austin-based company Spredfast tried to analyze just that.

The social media analytics company gauged how tweets tracked votes in seven key swing states, by using positive mentions of candidates to quantify trends. As it turns out, though it can sometimes serve as an indicator for how sentiment among voters is faring, social media proves just as inaccurate as the media and polls in the election that handed Donald J. Trump the presidency.

One thing's for certain, however: with over 75 million tweets about the election sent this Election Day compared with 2012's mere 31 million, the day will go down in history for more than one reason.

Such a beautiful and important evening! The forgotten man and woman will never be forgotten again. We will all come together as never before— Donald J. Trump (@realDonaldTrump) November 9, 2016