This week's 'Skim: Twitter officially doubled the number of characters you can tweet, and the (so far) surprising result; Facebook launches Messenger Platform 2.2 with all sorts of new capabilities for brands; Facebook launches polls for users and pages; Snap stock takes a tumble, and the company looks to an algorithmic feed for help; Twitter's new advertising subscription service could help small businesses; engagement on LinkedIn is on the rise, and how you can take advantage; much more...

1. Twitter just doubled its character limit, but nobody is using it

It's official: After only a couple months of testing, Twitter has rolled out a 280-character long limit to all users on the platform. Your company now has a lot more space to communicate with fans.

How did it happen so quickly despite users' concerns that more characters would mean reading through too much text? It turns out that not many people actually want to write more than 140-characters.

In fact, just 5% of tweets during the testing period tweeted with more, suggesting the user experience will remain unchanged, at least for the time being, while simultaneously decreasing headaches of marketers around the world who just need to get in that one extra word.

2. Facebook is rolling out Messenger 2.2, and here's what you need to know

The social network is taking new steps toward monetizing Messenger, and it's bringing brands closer to their consumers in doing so. Within the next few months, Facebook will roll out the ability for all businesses to send sponsored messages to consumers who've already interacted with their brand's chatbots on Facebook Messenger. Though businesses will only be able to send one message in a 24-hour period, the messages won't be labeled as "sponsored" and will instead appear just like other messages from friends.

During its release presentation for Messenger 2.2, Facebook also unveiled a new plugin, dubbed Customer Chat, which lets your website visitors engage and chat with a human or bot natively on your site without having to navigate away to Messenger. That conversation can then be picked right up on Messenger when the user does leave. Customer Chat is currently in closed beta, but we already think this one will be a hit. 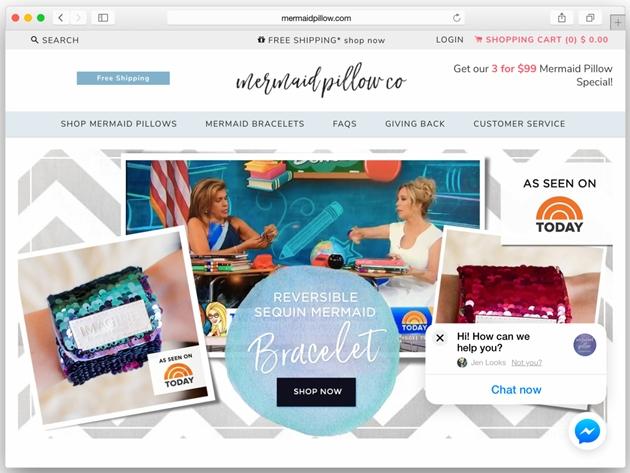 Snapchat might be talented at creating interactive features that users love—and Facebook loves to copy even more—but the company's not been so skilled at producing financial results that inspire investors. The third quarter losses of the social messaging app's parent company, Snap Inc., more than tripled, sending shares plummeting 16%.

Snapchat added only 4.5 million new users and lost a staggering $443 million in the third quarter, including a $40 million charge on unsold Spectacle units—the company's Snap-taking sunglasses and first foray into hardware.

With Facebook's Instagram copying its every move, Snapchat needs to reevaluate how it appeals to advertisers and, with that, how it can produce more revenue to make Wall Street a happier client. That's why it's about to join the algorithm club, "using data to power an algorithmically sorted Stories feed instead of the strictly reverse-chronological one it uses now," per TechCrunch. 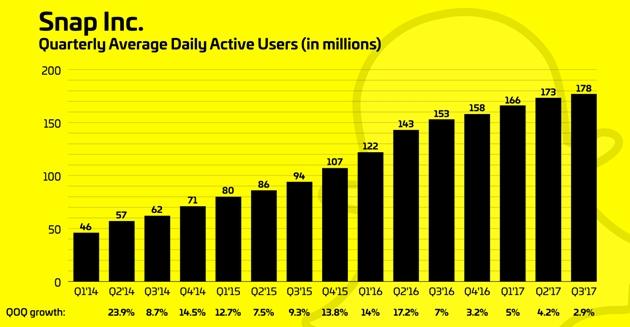 Twitter Promote Mode is a monthly $99 subscription that automates ad campaigns on the platform to make them seamless and easy for small businesses and personal brands. It'll automatically amplify users' tweets by turning them into ads that look like any other promoted tweet.

The benefit? Your tiny team doesn't have much to worry about in terms of setup since Twitter will simply promote things from your normal tweet stream. The drawback? Brands can't select exactly which tweets will be promoted, and there are fewer targeting options compared with the social network's full ad platform.

Promote Mode is already available in the US and UK as a public beta. It can be found within Twitter's mobile app and in the menu drawer.

Though Instagram Stories might have seemed a more natural place for polls, Facebook's decided to bring the engaging feature to it flagship platform as well this week.

Users and page administrators now have the ability to create two answer polls—accompanied by photos or GIFs—across mobile and desktop Facebook platforms. The polling option, accessible when selecting to create a status, could help brands and users alike gauge things as important as consumer sentiment about a product, or craft simple posts that engages fans and followers in a new, addictive way. 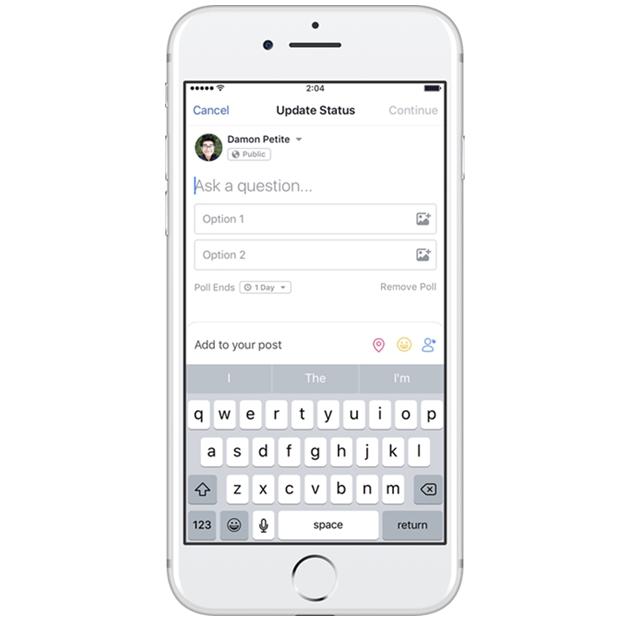 6. LinkedIn algorithm: engagement is up, so here's how to take advantage

While most of social media world obsesses over the latest tweaks to Facebook's algorithm, much less emphasis is placed on how LinkedIn values content and promotes that content to its users. But with engagement rates for publishers on LinkedIn on the upswing since the beginning of the year, it might be time to take a second look at how you can optimize content even further.

MediaShift highlights why content that shows professional expertise is likely to go viral on the platform, what article titles work best, and what "FollowFeed" is and how LinkedIn uses it to rank where it will place your content across its network.

This is simply a must read for any social media professional looking to grow leads and business on LinkedIn.

7. Americans turn to social media for news, and we're not sure that's a good thing

A new study from Pew Research Center sheds light on the increasingly important role that social media is playing in delivering news to the public, with 26% of American adults reportedly getting news from two or more social media platforms.

That's up from 18% in 2016, and 15% in 2013, suggesting the upward trend is likely to continue. That makes some of us anxious, considering the overwhelmingly depressing revelation that over 126 million people in the United States were exposed to posts by Russian-backed ad buyers hoping to sway the results of the 2016 presidential election. 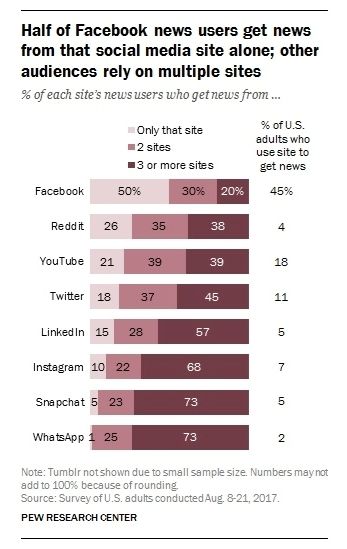 What's Facebook up to in its latest hunt for new features and gadgets? It's all about money and news. The social network is reportedly preparing to test a new "red envelope" function that lets users select an amount of money as cash gifts to friends—a first. Until now, Facebook has supported peer-to-peer payments only on its Messenger platform.

Facebook is also experimenting with a way to let publishers indicate that a post is "breaking" material, which, without any official confirmation from the social network regarding the mechanics, could help publishers make posts more eye-catching, or even push them up in priority on the platform's algorithm.

Video on social media isn't all created equal, and paying attention to the idiosyncrasies of each platform can help your brand better engage viewers. Aside from finding the optimal video length for each social network and the content type that performs best on each, Business2Community has three ways to customize your company's videos across the board, no matter the platform you're uploading them to.

From creating custom thumbnails for your videos and capturing the right audience with tagging, to maximizing your content's potential by clipping longer videos, check out how your business can optimize video for social. After all, the social networks are prioritizing video, so shouldn't you?

Social is indeed becoming more and more of a pay to play space, but that doesn't mean your brand can't benefit in an organic way from social platforms like Instagram. In fact, by incorporating some easy-to-execute tips, your company can optimize posts for more effectiveness and engagement. Covered in detail: 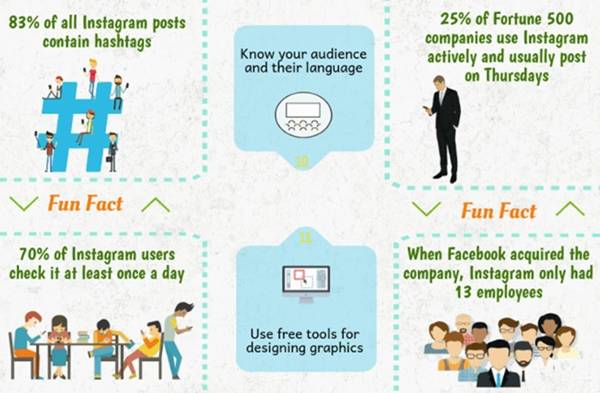 BuzzFeed was always good at finding just the right type of content to make people keep reading listicles, and now the media company is taking a shot at card games... with a social media twist. Introducing "Social Sabotage", a mix of Cards Against Humanity and truth or dare, that BuzzFeed describes as "an awkward party game."

The concept? Users draw a pair of cards that matches a social platform with an embarrassing behavior—for example, posting a video of you twerking on your Instagram or your grandma's Facebook page. (See an instructional video here.)

BuzzFeed says the game is meant to "implode your beautifully curated digital life," but we're not convinced this type of behavior will help society grow leaps and bounds beyond the serious issues of online harassment that already take place daily on social media. Thoughts? Fire back with your views in the comments below!