Actor Alan Alda has spent years cultivating a sense of empathy for other people. And that was lucky for me, because as we were setting up for this MarketingProfs podcast interview, Skype was not cooperating! We spent several minutes trying to connect, and finally resorted to using the phone, by which point I had completely forgotten what I had planned to ask him! But he was very kind about it, and we had a good laugh before getting back on track.

As an actor, relating to others in a meaningful way was the key to Alan's success on screen and off.

A six-time Emmy Award and Golden Globe Award winner, Alan played Captain Hawkeye Pierce in the TV series M*A*S*H and Arnold Vinick in The West Wing. He's also a director, screenwriter, and the best-selling author of several books, including Things I Overheard While Talking to Myself and Never Have Your Dog Stuffed: And Other Things I've Learned.

Alan's on-set experiences had demonstrated the value of improvisation and taking the time to relate to his fellow actors, but it was a bad experience with a dentist that set him on his journey to improve empathy and communication in medicine, science, and other fields.

With Alan sitting in the dentist chair, his dentist, scalpel in hand, mentioned in passing that there might be some "tethering." When Alan asked for clarification, the dentist impatiently barked "TETHERING, TETHERING," brushing off Alan's concerns.

What the dentist had failed to effectively communicate was that the surgical procedure he was about to perform would disconnect a piece of tissue in Alan's mouth, turning his Hollywood smile into something more like a sneer. After coming to grips with the change in his smile, Alan embraced a new career journey playing on-screen villains.

He also found himself thinking more broadly about the dentist's failure to communicate, and he began researching new ways to help people relate to one another more effectively across the board.

Alan later hosted the interview series "Scientific American Frontiers" for 11 years on PBS. Calling on his experience both with improvisation and with relating to other actors during filming, he interviewed hundreds of scientists for the series, helping them to make their research findings clear to viewers.

Tying together years of research and experience helping others to communicate more effectively, Alan helped found the Alan Alda Center for Communicating Science at Stony Brook University, which has used innovative improvisational theater games to train thousands of scientists around the world to communicate better.

Most recently, he started helping business leaders and executives, speakers, and entrepreneurs with training programs offered through the Alda Communication Training Company ("ACT").

I invited Alan to Marketing Smarts to discuss his new book, If I Understood You, Would I Have This Look on My Face? My Adventures in the Art and Science of Relating and Communicating. There are so many interesting, fun moments in this episode. It's one of my favorites!

Here are just a few highlights from my conversation with Alan:

Empathy has a dark side (17:22): "The notion that I have of 'dark empathy' is that some people define 'empathy' to mean compassion or looking out for the other person or generosity. And I don't use it that way. To me, empathy is just a tool. It's a way of knowing what's going on inside the other person so that you can tailor what you're saying so that they understand it better. But there are people who use that tool to the other person's disadvantage. An interrogator knows how you feel. Bullies know how you feel. And they both use it against you to put you in a state that gives them more control over you.

"It's possible for a salesperson to do [use empathy], too. The only thing is, I think it's a really good principle to follow that you find out not only what the other person wants, it's [also] a good thing to find out what they need—what would really do them good in the long run to have. Even if you make a little less money on the commission for that item or that service.... The chances are greater that you're making a customer for life if a couple of months later they say, 'Boy, I'm really glad that you touted me onto that, because it saved the day.' Then it's a positive transaction that can lead to more."

Cultivating empathy will improve your marketing (and your relationships) (20:11): "The reason I wrote the book is because I had come to realize that the eight years of work I had spent actually helping teach scientists to communicate better (and medical professionals), I had begun to realize that it applied to everybody. And when I looked back over my life at the times, for instance, when I had to earn money when I was an out-of-work actor selling mutual funds, or the times after that when I was selling ideas for television shows and that kind of thing, I realized that when it didn't work, it was because I wasn't using empathy. I wasn't reading the other person to find out if the idea was going over like a lead balloon or not: 'Is this what the other person really could use?'

"I got clues about this when one eminent scientist said after a workshop, 'I communicate with everybody better now, especially my wife,' and another scientist said 'this [communication] training has saved my marriage.' It was getting clearer and clearer to me that it applied to everybody—parents and children, husbands and wives. It even applies to people breaking up!"

Laughter is the key to connecting (30:34): "When I'm in a play, if I can arrange it so the other actors are comfortable doing it, I try to sit for an hour before every performance and just laugh together. Make fun of each other. Tell funny stories. Make fun of other people. Just anything to get you into a laughing jag. Nothing brings you together like that, I've found. For me, it's the best preparation for a theater performance or a film performance, but it's also wonderful for teamwork."

Empathy and diversity drive business innovation (32:25): "Even in a formal meeting, if people can get the accurate impression that they're free to raise their voice, they're free to talk, to enter the conversation, to be wrong about things, to try out ideas—everybody knows they're being listened to.

"And if one person is not being listened to because they speak with a thick accent...or because that person is a woman and women are often ignored when they talk at a conference table, or any other reason—the person is young with older people, or inexperienced with more experienced people, and they don't feel they have the right to talk—you're losing the value of that team member, but the whole team is losing the value of synergy and diversity. When people feel free to talk, the whole team hears things that wouldn't have been said otherwise, and it can turn out to be extremely valuable." 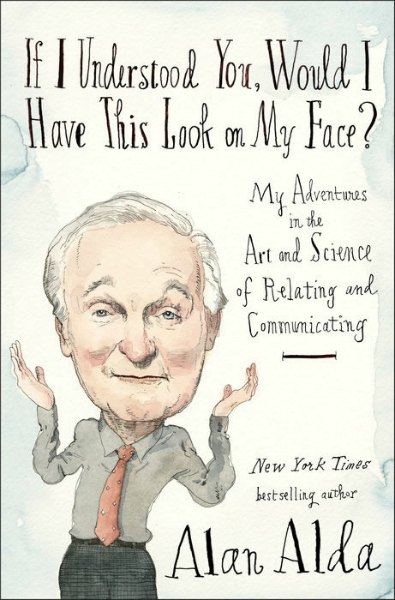 To learn more about Alan, visit AlanAlda.com,nand follow him on Twitter: @alanalda. If you want to explore options for bringing Alan's communication training to your company, check out his training programs at Alda Communication Training. And don't forget to pick up a copy of If I Understood You, Would I Have This Look on My Face? My Adventures in the Art and Science of Relating and Communicating. I especially enjoyed the audiobook—narrated by Alan himself!

Alan and I talked about much more, including how he knew his wife was "the one," and the role of empathy in effective interviewing, and how he and his M*A*S*H co-stars used to get ready to shoot scenes, so be sure to listen to the entire show, which you can do above, or download the mp3 and listen at your convenience. Of course, you can also subscribe to the Marketing Smarts podcast in iTunes or via RSS and never miss an episode!

Award-winning actor ("M*A*S*H") and best-selling author Alan Alda, author of If I Understood You, Would I Have This Look on My Face? My Adventures in the Art and Science of Relating and Communicating. Alan is the founder of the Alda Communication Training Company, which offers communication training programs for business leaders, entrepreneurs, and others. Follow Alan on Twitter: @alanalda.