1. Focusing on the Numbers Instead of the Quality

One of the biggest and most common mistakes made with social media influencers is focusing on numbers and other vanity metrics to choose influencers, rather than their quality. 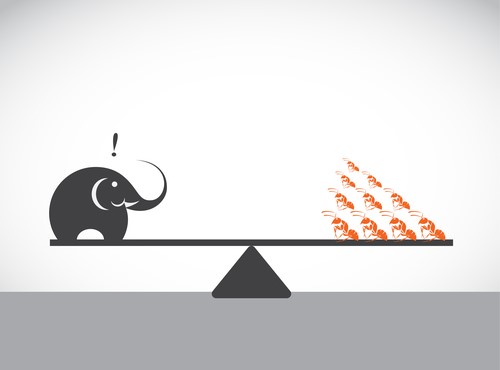 The idea seems sound: The more followers an influencer has, the bigger they are, right? It means that they can reach a much larger audience, which, in theory, means that you should also get more results, simply because the message will be heard by more people.

But, the harsh truth is, that is not necessarily the case; just because someone has hundreds of thousands of followers on social media doesn't necessarily make them a true influencer.

In fact, many marketers and businesses are now gravitating more toward micro-influencers (influencers with under 100,000 followers or fans) because, even though they don't have many followers, and therefore that big of a reach, they can actually be more effective than using someone who has a large following but whose followers aren't engaged.

Engagement should be the focus when researching influencers, and not the amounts of followers they have. It's actually a bit of a paradox, but studies have found that engagement often goes down with influencers that have a lot of followers; once they reach a certain point, engagement drops dramatically, most likely because it's close to impossible to engage and interact with such a large audience.

Not only that, but the bigger someone gets on social media, the more followers they will attract—and, in many cases, those followers won't be as targeted as those of a micro-influencer. The reason simple; in the beginning, people will follow because they are genuinely interested in what the (future) influencer has to say. As the influencer grows, though, more and more people will start following simply because of their online "celebrity" status—and so they won't be as invested as a true fan.

When looking to find and connect with influencers, try to forget about how many followers they have, and look instead into how much they are actually engaging—and how much their audience engages in return.

The more engagement, the better, increasing the chances that when the influencer promotes your product or service, for example, followers will trust the influencer's opinion and actually go and check it out for themselves.

You can use a tool like Buzzsumo to research influencers' engagement:

You can see what their retweet and reply ratio is, which can help give you a starting idea of how much they engage.

You should also check your own backyard: Are there any good influencers already following you? Or brand ambassadors that, although they have smaller audiences, can help you further promote your business online? You can use a tool like Agorapulse to analyze your followers and see what influencers and brand ambassadors you have in your list:

When using social influencers to help promote your business, the first instinct is to try to control what they do, which is a common mistake with influencer marketing. You want to get results, so you're pushing for them to use certain wording when promoting your business, using similar copy to the one in your usual promotion, and generally trying to make the influencer say what you want them to say.

Doing so can prove to be very counterintuitive. The reason for using social influencers is that their audiences trust them and their opinion; followers are followers because they like the influencer's voice and online persona—and not because they want to hear the usual promotional pitches.

To get the results you want from an influencer, it's better to let the influencers be authentic and communicate with their audience as they usually do. That's not to say you shouldn't give them any direction at all; rather, let them do their own thing, within limits. Listen to their input over how they act and talk online, how they usually interact with their audience, and so on; they will be much more informed than you about what works with their particular audience.

3. Not Measuring Your Results

Ideally, use an influencer outreach tool to help you keep track of all your formed relationships.

Before starting to work with an influencer, you should have clear goals in place. Doing so will then help you identify what needs to be measured when the time comes, and it will also allow you to identify more easily which parts your campaign worked, and which didn't.

By measuring, you will be able to identify which influencers have brought the most positive results and to figure out which promotional methods helped you achieve your initial goals.

When setting goals for your influencer marketing campaigns, try to be as specific as possible in you want to achieve, what the time frame is, and so on. Ideally, use the SMART way of setting goals: make sure they are specific, measurable, attainable, realistic, and time-bound.

Then, when the deadline is up, check your results: Have you achieved your goals or not? Whatever the answer is, you should then find out why exactly your campaign worked or didn't.

Influencer marketing is, in some ways, still in its infancy. Although marketers have always made use of celebrities, authority figures, and so on, social influencers are a relatively new breed, which means there's a learning curve. Everyone makes mistakes, but it's those who learn from their mistakes who succeed in the long run.

Are you using influencer marketing to promote businesses online? What are some of the biggest lessons you've learned from using social media influencers?