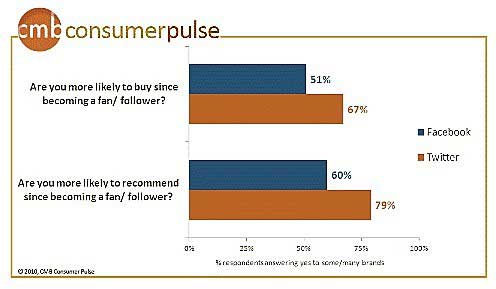 Below, other findings from the Chadwick Martin Bailey study, Why Social Media Matters to Your Business, conducted by iModerate Research Technologies.

Many people actively seek out brands they already like and "fan" them on Facebook: 49% of Facebook fans say they became a fan of a brand at least in part because they were already customers. 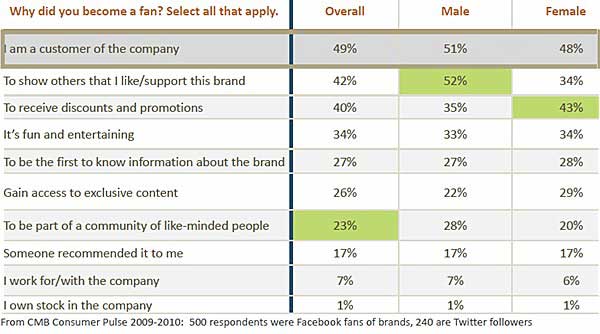 Asked to select the primary reason they become a fan of a brand on Facebook, men cited the following top 4 reasons:

The top 4 reasons cited by women:

Some 59% of men say they became a Twitter follower of a brand at least in part because they were already a customer, compared with 43% of women who say so. 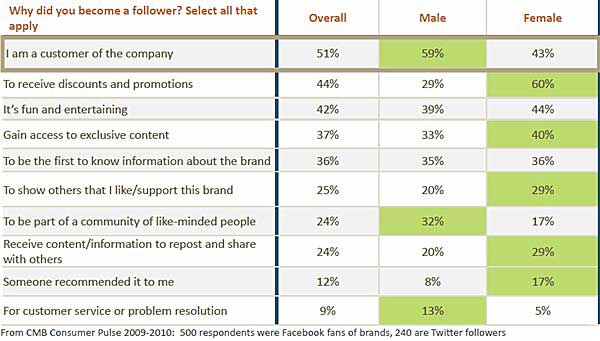 Other notable Twitter-related differences between the genders include the following:

Asked to select the primary reason they follow a brand on Twitter, men cited the following top 4 reasons:

The top 4 reasons cited by women:

About the data: Findings were collected from 1,504 adults (age 18+) via a nationally representative online survey questionnaire, within the US, by Chadwick Martin Bailey, from February 8 to 9, 2010.  In addition, iModerate Research Technologies conducted one-on-one discussions to more fully contextualize social media behaviors.