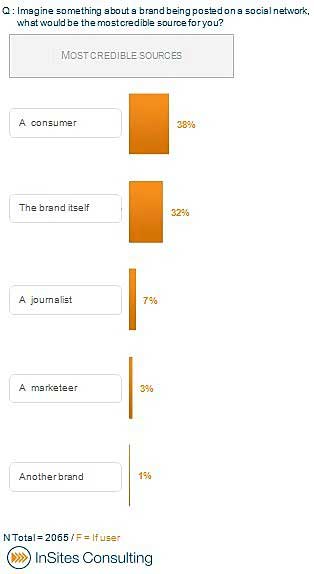 Information posted by journalists (7%) and marketers (3%) is viewed much less favorably.

Although 44% of social networking users say a brand's posting about itself is credible, fewer US consumers overall (37%) say the same.

Below, other findings from the 14-country Social Media Study by InSites Consulting

Among consumers who have become a fan of something on a social networking site, most cite entertainment or celebrity profiles as among their favorites:

Trust in the Security of Information

US consumers have more trust in their top social site: Just 26% of US Facebook users say they have little trust that personal information from the site will not be shared with others, while 31% have a lot of trust and 43% are neutral.

Overall, trust is higher among professional websites: 25% of LinkedIn users have little trust that personal information from the site will not be shared with others, while 42% have a lot of trust and 35% are neutral.

Most social networking users (72%) are members of two social sites—and that use is often for personal rather than business reasons.

Users log in to such sites on average two times a day, while users of strictly professional social sites (e.g., LinkedIn) log in on average nine times a month.

Users are saturated: 75% of social networking users say they have no intentions to stop their current memberships and 43% say they don't feel the need to further expand their memberships to other social sites.

Over one-quarter of social networking users (26%) are "Addicts," those who log in on average 123 times per month and perform an average of 95 activities during that period. The typical Addict is a single female, age 18-44, who is concerned with building an image on her profile(s). 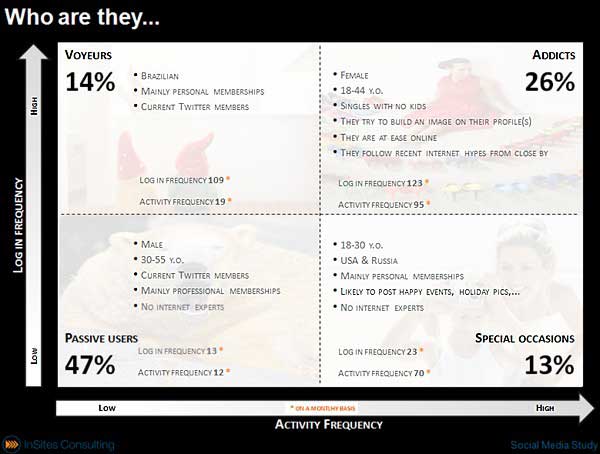 Nearly one-half (47%) are "Passive Users," those who log in on average 13 times a month and perform an average of 12 activities. The typical Passive User is a male, age 30-44, who has a Twitter account and who uses social networking mainly for professional reasons.

In the US, Facebook also has the strongest retention level: Just 23% Facebook users say they have reduced their activity levels on Facebook since they joined, compared with 64% of MySpace users and 43% of Twitter users.

Most social networking users say they use social sites for personal reasons, such as sending messages (94%) and viewing photos (91%); 79% become members of groups and 58% become fans. 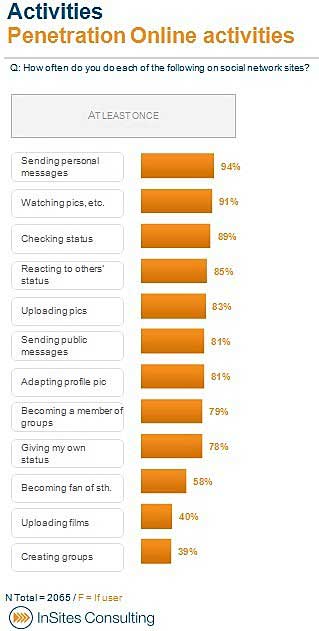 About the data: Findings are from the InSites Consulting survey of 2,884 Internet consumers in 14 countries: Belgium, the Netherlands, the UK, France, Germany, Spain, Italy, Portugal, Brazil, the US, Australia, Romania, Russia, and China. Collected from December 2009 to January 2010, the data are representative of each country's Internet population, age (18-55), and gender.