More than four in five consumers say they have "broken up" with at least one brand on Facebook, Twitter, or email because of irrelevant, too frequent, or boring marketing messages, according to a study by ExactTarget and CoTweet.

Facebook users have become more discriminating in their relationships with brands:

Typically, Facebook fans who end brand relationships do so most often by "unliking" the brand (43%) or removing the brand's posts from their Facebook news feed (38%): 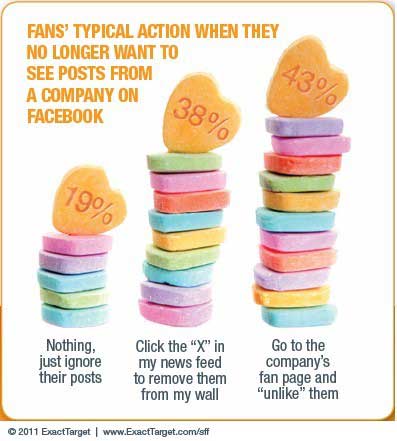 Below, other findings from the report, The Social Break-Up, by ExactTarget and CoTweet.

Why Consumers "Unlike" Brands 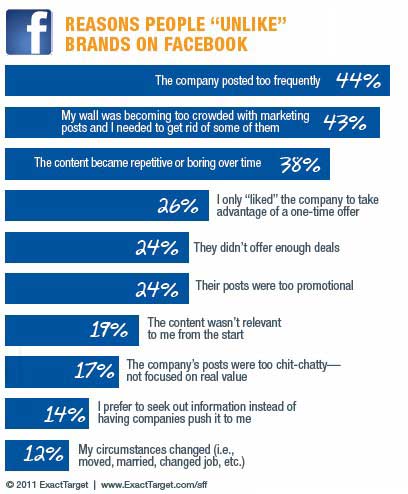 Views on brand promos are mixed: 24% Facebook fans have "unliked" a brand because the company didn’t offer enough deals, while 24% have "unliked" brands because posts were too promotional.

Interestingly, consumers' decisions to "unlike" a brand has little impact on future buying: 63% of Facebook fans say they are as likely or more likely to purchase something from a company after ending their Facebook relationship. Another 18% say they tend to "unlike" brands they didn't buy from in the first place.

Moreover, Twitter users have different expectations around brand communications. Boring content is the most common reason users "unfollow" brands (52%),  whereas frequency is less of a concern (39%). Clutter (41%), however, is a greater concern among those who end relationships with brands on Twitter. 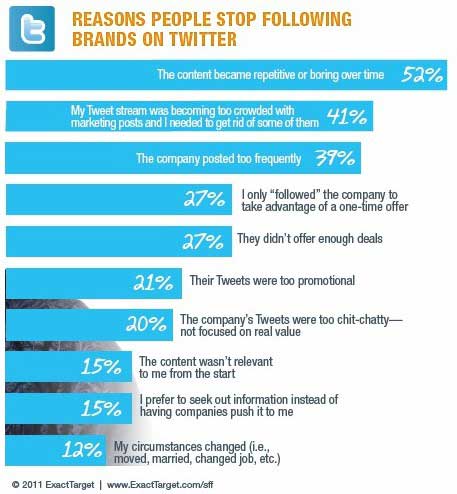 Value is important to Twitter users: 20% of have stopped following a company because Tweets were too chit-chatty.

Motivations for Unsubscribing to Email

More than nine in ten (91%) email users say they have unsubscribed to a brand's email they had previously subscribed to.

Asked what factors motivate them to unsubscribe, 54% of email subscribers cite too high a frequency of delivery, followed repetitive or boring content (49%) and a general need to cut back on email subscriptions (47%). 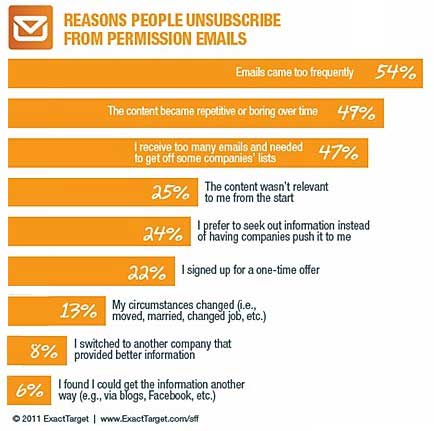 One in four email subscribers (25%) say they have unsubscribed to emails because the content was irrelevant from the start, while 13% say they have done so because of changed circumstances.

How Consumers Unsubscribe to Email

Over two-thirds of email users (67%) click "unsubscribe" links when they lose interest in email, 17% delete them as soon as they arrive, and 8% hit the spam button.

Meanwhile, only 16% of email subscribers say their intent to purchase from a brand declines after unsubscribing to the brand's email.