Though most email is still read via webmail channels, some 16% of email messages were viewed via mobile device in March 2011, up 80% (7 percentage points) from 9% six months earlier, according to study by Return Path. Such mobile activity occurred steadily during the early part of the week, with increased activity beginning on Thursday into the weekend.

Below, other findings the study by Return Path, based on email campaigns sent between October 2010 and March 2011.

The growth in mobile came at the expense of webmail (e.g. Yahoo, Gmail, etc.), which accounted for 48% of email messages viewed in March, down from nearly 55% in October. 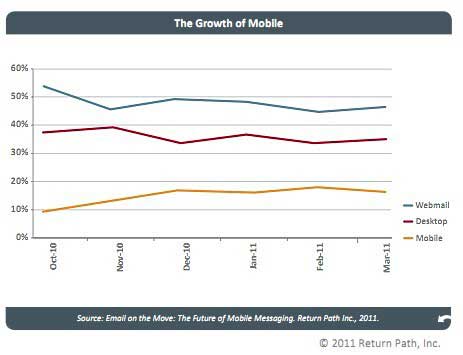 Desktop email activity remained relatively steady during the period, accounting for 36% of email viewing in March.

Among email messages viewed via desktop, Outlook accounted for 63% of views, followed by Apple Mail with 31%.

The Right Message at the Right Time

Across three email channels, viewing activity varies during the week: 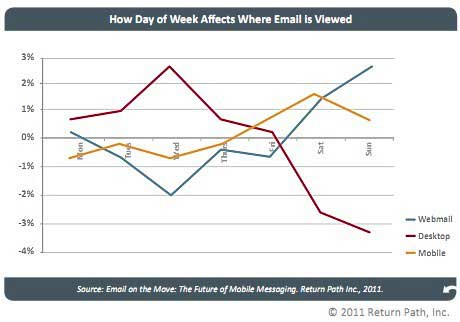