One-Third of Adults Have Snoozed During PowerPoint Presentations

Just how desperate are we to avoid PowerPoints? Roughly one in five surveyed adults (21%) say they would rather to do their taxes than face another PowerPoint presentation and 20% would prefer to visit the dentist. 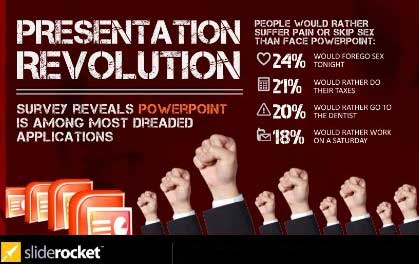 Below, other findings from SlideRocket's survey of 1,000 US adults who use office software on a daily basis, conducted by IBOPE Zogby International.

Among those lulled to sleep via PowerPoint, 55% say it has happened at least twice.

Meanwhile, 20% of adults say they have fallen asleep so many times during PowerPoints that they've lost count—with men twice as likely to say so.

About the data: Findings are based on an online survey of 1,003 US adults who use office software on a daily basis, conducted by IBOPE Zogby International for SlideRocket, in May 2011.