More brands are using social networking to win new business: 43% of US companies say they are successfully using social networks to find new customers, up 8 percentage points from the 35% that reported doing so a year earlier, according to a survey from Regus.

Brands worldwide are also achieving greater success with social networking: 47% of companies worldwide say they are using social media to find new business, up 7 points from the 40% that reported doing so in July 2010. 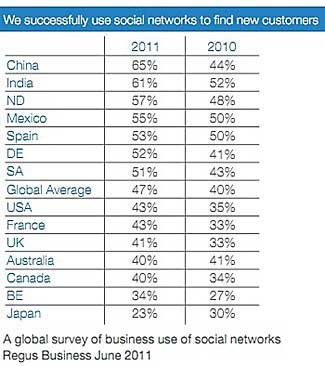 Below, other findings from the 14-country survey of senior managers and business owners, conducted by Marketing UK for Regus.

Companies that use social networks to acquire new business are roughly 11% more likely to report increased revenues and profits than those that don't use social channels to find new business.

For example, one-half (50%) of US companies using social networks to acquire new business registered revenue increases in the previous year, compared with 39% of those not using social channels to win new business. 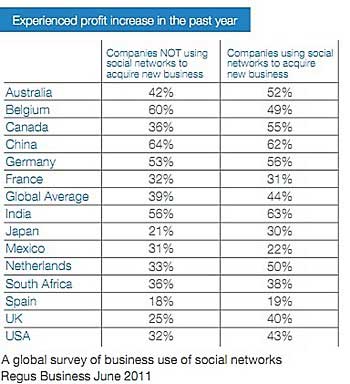 Similar results were found for companies outside the US: 44% of companies worldwide that use social network to acquire new business report increased profits in the previous year, compared with 39% of those not using social channels to win new business.

Dedicated social media budgets are on the rise:

About the data: Over 17,000 respondents (primarily of senior managers and owners) from the Regus global contacts database were interviewed during February 2011, from businesses across the globe. The survey was managed and administered by Marketing UK on behalf of Regus.